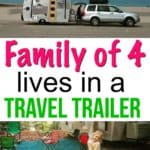 Macy Miller and James Herndon didn’t think twice about living in a small travel trailer full-time with two kids and a Great Dane. They’ve now been five months on the road, chronicling their adventures on their website, Learning the Long Way.

The couple built their small travel trailer from the frame up from a 1966 Aloha Travel Trailer.

“We took it down to the flatbed. We reused the frame and windows, but everything else is brand new,” Macy said. “We kept the same shape which helped us register it.”

The two added a bathroom, bunk beds for the kids in the travel trailer, an adult bed for themselves, a little kitchen, table, and tiny washing machine.

“It’s one-third the size of a tiny house. We’re both on and off-grid compatible, so we can be solar-powered and boondocking as long as we can get water. We generate our own power and can also hook up to city water and power if we want,” said Macy.

The two wanted to be as flexible as possible. They never know where they’ll end up spending the night when living in a travel trailer.

Macy and James have an unusual story. Macy decided years ago she wanted to live in a tiny house to get rid of debt and live life more on her own terms.

She was in the process of building her own tiny home from scratch when she met James, who jumped on board with the idea.

“We lived in the tiny home for over four years,” Macy said. “James is into the same thing so it resonated with him, so its our journey together.”

But once the couple erased their debt, they wanted to travel and see more of the world, which is why they decided to go about living in a travel trailer.

It’s amazing to think about an RVing family living in a travel trailer, but Macy, James and the kids get along just fine in a small space.

Macy’s kids are 2 and 3.5 years old, and don’t have a problem finding things to do.

“In their bunk beds in the travel trailer I have storage for their favorite toys and they also have a drop-down art table where they draw or paint,” Macy said. “They love building forts out of their bunk beds. We also do a movie night once in awhile. They both have a Kindle Fire and will watch a movie in their bed with popcorn, and we watch something else. We’ll have three different movies going at the same time. The travel trailer is comfortable inside and out. The point of this trip is to get out and see the world, so we do a lot of that.”

She said its been amazing seeing her kids grow in a world of fulltime travel trailer living.

“Miles has started talking a lot. We were at Teton National Park and one of his first words was ‘moose’ because we saw a statue of a moose,” Macy said. “It’s cool to see him learning organically. His sister learned more from books; her first couple of years were spent in the tiny house. Miles is more around things than being into books. It’s cool to watch him learn language in real life.”

How they make enough money while living in a travel trailer

Macy and James both work online, but James is the primary breadwinner, where Macy mostly looks after the kids near the travel trailer.

“He started an e-commerce business,” Macy said. “He was doing that when we met. He started with an Etsy shop, which is the gateway drug to location independence. Eventually, he transitioned it over so he does custom 3-D branding irons for woodworkers and leather workers so they can mark their work. It’s called www.custombrandshop.com.”

“People tell you it will be hard, or say things without thinking,” Macy said. “I think it’s important to find a support group, especially on Facebook, whether you’re into sailboats, or skoolies or tiny houses or whatever. Find your tribe. It’s important to have a support group when it’s scary or daunting. And there are other people out there doing it too, who are more than willing to help.”

Macy and her family don’t know how long they’ll be living in the travel trailer full time, but want to enjoy every moment of it while they do.