Skip to content
*This post may contain affiliate links, which means I may earn a small commission at no extra cost to you. Please read our disclosure policy for more info.
7667 shares 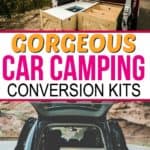 If you’re craving outdoor adventure but don’t want to spend the coin in on a campervan, you can easily turn your car into a camper. A quick and easy DIY car camper conversion is enough to start your trip.

Sure, a car lacks some of the comforts an RV can offer, but if you’re on a budget and you just want to get gone fast, turning your car into a camper, even just temporarily, is a great solution.

Here are our favorite ways to create a simple and comfortable car camper for road trips.

Best sedan cars to convert into a camper

Car camper conversions have become extremely popular lately, simply because anyone can build their own. Most people own a car and some conversions don’t even require any practical skills or tools – just fold down your back seats, throw your camping gear in the back, and off you go.

Here’s the best and most popular sedans people are converting into campers:

While this list doesn’t seem very long, bear in mind that you can turn any car into a camper. All you need is some DIY skills, good adaptability, some cash, and a working car.

You can do this on any budget – you can just buy everything from Walmart or Amazon, or splurge on some serious tools to create custom panels and platforms.

Need proof? Here are 7 car camper conversion ideas that will spur you into action, now.

Jody moved from Florida to California to live closer to his girlfriend. He got a job at a van conversion company, but money was too tight to pay for rent in California, so he ended up living in his 2007 Nissan Versa.

His van conversion skills proved very handy, because the interior of his car camper looks incredible.

The right rear seat is in place and provides a place where to eat, work and relax. In place of the front passenger seat, there’s a platform he uses for sleeping and a slide-out table, which Cody uses to cook. He removed the left back seat and installed a sink, plugs and some cabinets. Next to it, there’s a small trash can.

At night, the back right of this car camper conversion folds down to reveal the full sleeping platform, which is an impressive 6 and a half foot single bed. He uses an inflatable camping mat for a mattress and he made magnetic curtains to dim the whole vehicle.

With the passenger front seat taken out, there is a lot of storage space under the platform. So Cody stores a lot of food down there, as well as his battery. The remaining space acts as a footwell when Jody has a friend over. He can use the platform as a table for two.

The trunk of the car acts as a wardrobe, where he keeps all his clothes, sleeping gear and climbing equipment. Very impressive – this car camper conversion is functional and solidly made.

Alyssa converted her Chevrolet Sonic into an Instagram-worthy mini RV. It really feels like a micro camper, rather than a car camper conversion.

When Alyssa planned her car camper conversion, she didn’t want to feel like she was sleeping in her car. She definitely achieved that. The bohemian feel of the dresser and soft furnishing give this sedan camper a homey feel.

If you doubt you can turn any car into a camper, this one’s for you. Lorraine managed to convert her 8ft-long Smart car into a micro car camper. Yep, it can be done.

Both seats are in place, but the passenger seat folds down at night. The tailgate has a storage area, hidden by the trunk lid, where she keeps all her gear. When closed, it offers the perfect platform to cook on. In the trunk, there’s her kitchenware, including a basic sink, and bed.

To sleep, she wedges a board in the trunk and one by the dashboard every night. This allows her to use the boards and the passenger seat as a platform to lie down. On top of it, she places a single foam mattress and a camping mat. Lorraine is 5ft6, so it works perfectly for her.
The Smart car has a moonroof, which offers a great view when lying in bed.

This really cool car camper conversion really shows that you don’t need much to turn your car into an RV – just start with what you’ve got.

Cameron needed to live on the go while in college for a month, so he decided to convert his 2003 VW GTI into a car camper on a budget.

In the trunk, he left the rear deck in place, in order to store some of his gear on top of it. Under the back dash, there’s more storage and Cameron’s bed.

The bed is made out of a single foam mattress, with a camping mat at the bottom and a sleeping bag on top. Next to the bed, there’s Cameron’s kitchenware and food.

This car camper conversion is super simple – no tools required. You could probably get it done in a day, if you buy the gear you need in the morning and put it all in place in the afternoon.

After living in the western US for 20 years, CJ adventures with her two border collies around the South East of England, in a 2009 Ford Fiesta small car camper.

The car is a standard hatchback with five doors. However, this adventurous lady set it up for camping. This micro camper is simple and very functional and it allows her to get out on weekly adventures.

The passenger footwell acts as storage for her shoes and food. All car door compartments stow some handy gear, such as her Kindle or camera equipment. Between the passenger and driver seats, CJ installed a power outlet with four plugs. She uses it for all her power needs.

The back of the car acts as a sleeping area. CJ removed the seats and left the backrests folded down – this is an insurance requirement in the UK. On top of the backrests, she braced a plywood platform, which creates a flat surface to lie on. There is a folding part to the platform that extends the bed forward.

At night, CJ moves the front seats forward and extends the platform. The backseat footwells act as storage space for her water tanks and cooking gear.

In the trunk, CJ keeps her folded up mattress and sleeping gear. At night, she unrolls her single custom foam mattress and puts her sheets on. Under the mattress, CJ has built and installed a storage compartment that opens up to reveal all her clothes and kitchenware.

When closed, this compartment serves as a kitchenette. She can also sit on it while admiring the view. At night, she sleeps in the back, while her dogs nap on the front seat.

Emily converted her Mini into a car camper with the help of a friend. She often travels around the UK solo, so it’s a perfect solution for her.

The bed frame is made out of MDF boards and it hugs the shape of the car interior. The back of the fame has hinges, so it can be lifted to store her gear in the trunk. The mattress is made out of foam and cut into two parts, so it’s easy to move when she needs to access the storage area.

The front passenger seat has been removed to create some extra storage space. Between this compartment and the driver’s seat, there’s a dividing panel.

This car camper conversion is very simple, yet professional-looking, thanks to the custom wooden panels and trunk compartment.

Sascha converted his Skoda Octavia to set off on the three-month-long road trip of a lifetime. This is a serious build – there’s an actual kitchenette with a sink in the trunk.

The bed sits on a frame with wooden slats, which folds up if he needs to sit in the back. On top of the frame, he fitted a custom foam mattress that looks extra comfy. Sascha stores most of his gear on the roof, in a cargo carrier.

This type of car camper conversion requires a little more time, tools and skills. But it’s worth it if you’ll be gone for weeks or months at a time.

David Swanson of Luxury Living in a Prius has lived in a Prius for six years. Over time, he’s been able to perfect his camper through experience, making his conversion solid and practical.

He removed the passenger seat to install a wooden board. He uses that area for cooking during the day and spreading out his sleeping bag at night. David’s car camper is great for boondocking – he added two solar panels to the roof, which power his 12-volt refrigerator. This means he’s free to go off grid any time he likes.

Conclusion on turning your car into a camper

As you can see, you can pretty much turn any car into a camper by folding down the back seats and adding either a camping pad or a comfy memory foam mattress. It’s that simple.

If you have a car, you can get gone in no time. You can always add more permanent gear, if you decide car camping is for you.