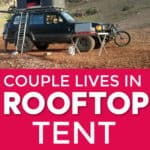 Several years ago, Autumn and Adam Raven were leading a so-called perfect life. Autumn had a well-paying job, the two owned a home and they were debt free. To boot, they had all the fun toys two outdoorsy people could want – sailboats, kayaks, motorcycles.

But something in their lives was missing.

“I loved all these outdoor activities but could only pick one to do on weekends,” Autumn said. “When I hit 40, I realized if we were going to do the things we talked about doing, we needed to do them now.”

So, Autumn put in notice at her job, intent on making her travel dreams come true.

“My last day at work was my 42nd birthday,” she said. “It was funny and terrifying at the same time. I think I’m a touch crazy to go to my job and just quit. I told them I was going to pursue my writing.”

The two sold their house, and Autumn rolled some of her retirement money into a savings account. Then, they bought a Land Cruiser, a rooftop tent, camping gear, and took off.

Have a truck? Embark on a similar adventure and check out The Best Truck Bed Tents

The Land Cruiser and the rooftop tent 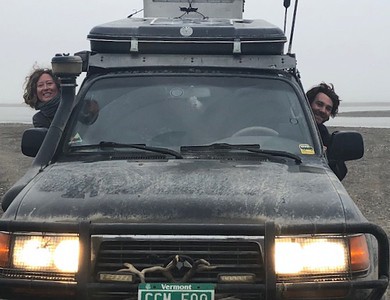 Autumn and Adam traveled for 2.5 years in a hardy Land Cruiser and slept in a rooftop tent. They drove 80,000 miles to the four corners of the United States, up to Alaska through Canada. The couple explored Labrador and Newfoundland.

“I spent a lot of time writing from the passenger seat of the Land Cruiser, or at night in the rooftop tent,” said Autumn. “I also wrote at a lot of picnic tables and near fire rings.”

The couple liked the rooftop tent alright, but after a while, they realized as a lifestyle, and especially as a work-on-the-road lifestyle, it didn’t cut it.

Check this out: These empty nesters live a full life in a RoofNest

“We were in a torrential hailstorm in Oregon with two inches under the Land Cruiser,” said Autumn. “I made dinner under the awning and we watched a movie on our iPad, but it was just wet and damp and miserable.”

Another nail drove into the rooftop tent coffin when Autumn and Adam were in Alaska. They were in Dead Horse, near the Arctic, and it was 32 degrees and sleeting. 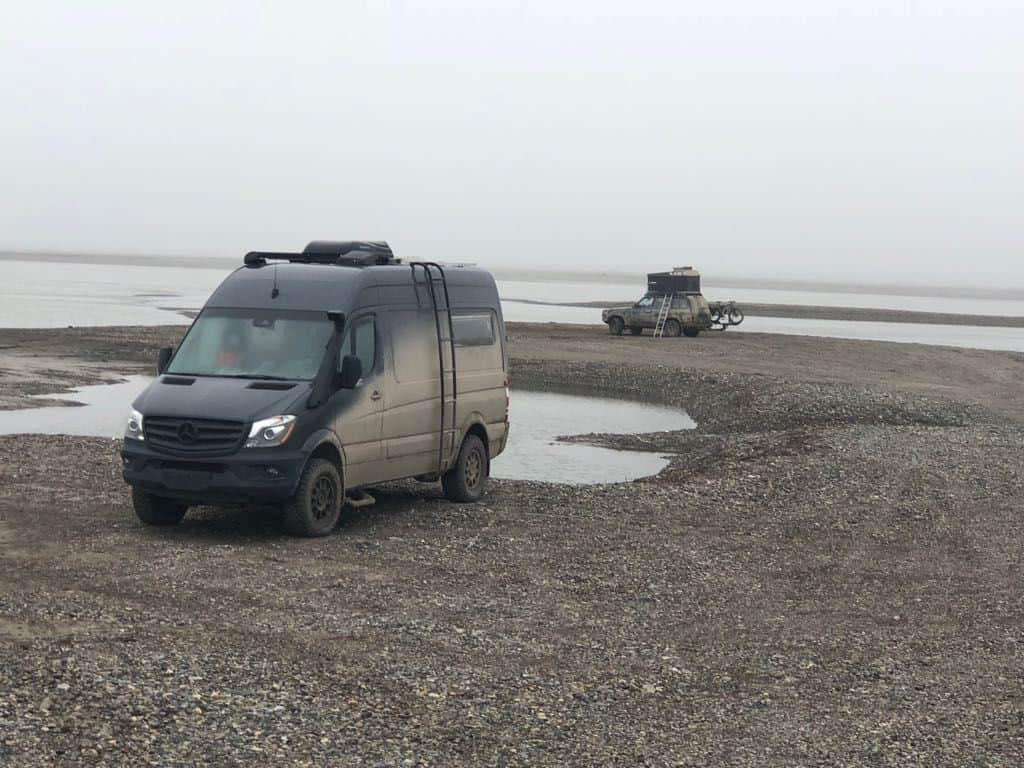 “We met the nicest couple in a Sprinter van and they invited us inside,” said Autumn. “They gave us tea. The wind was shaking the van and shaking our rooftop tent and we were thinking about how we had to crawl up there and go to sleep.”

So, Autumn and Adam decided they needed to do something different. They needed shelter and security, a warm and dry place to hang out.

How they decided on a Four Wheel Truck Camper 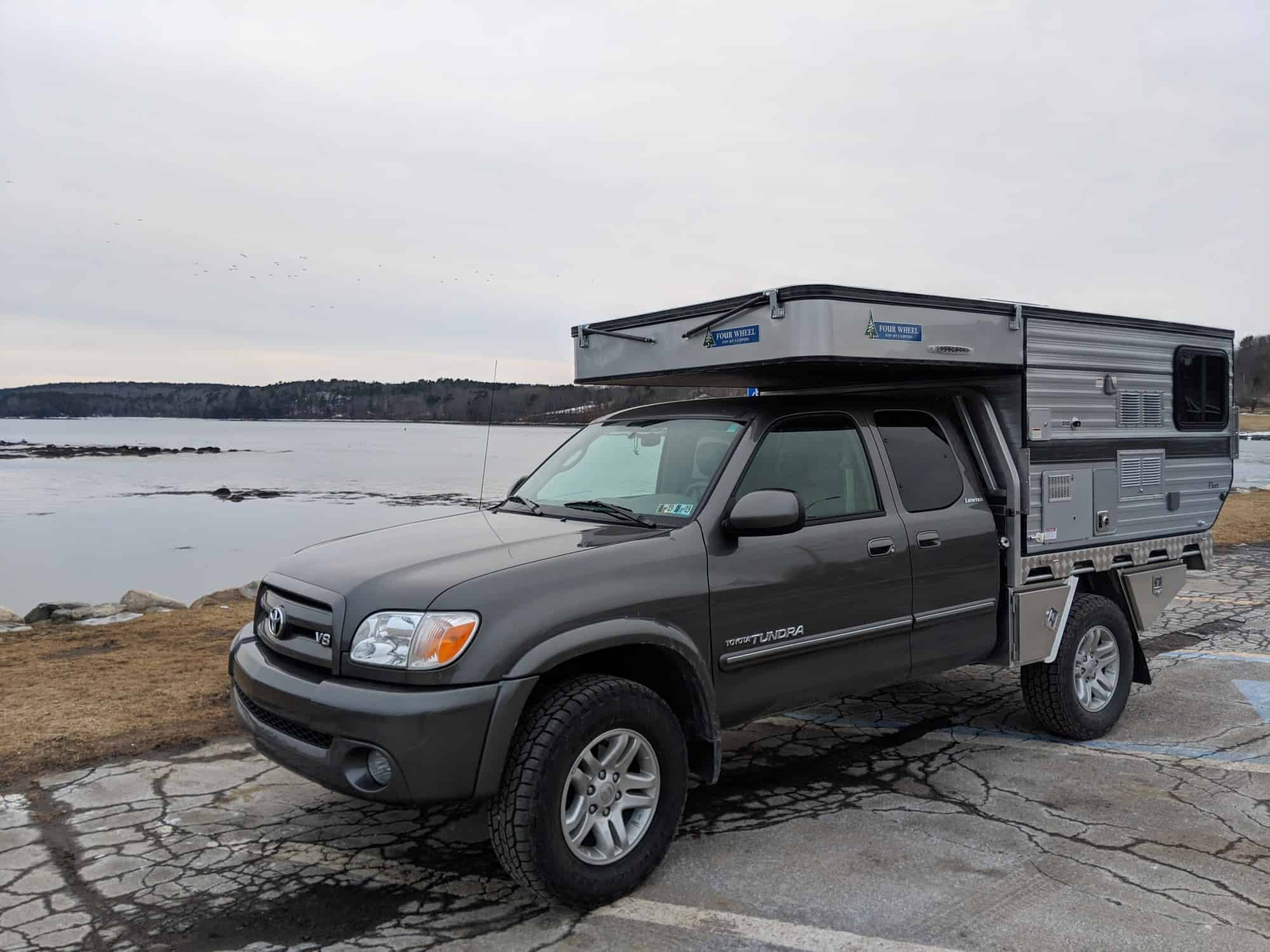 At first, Autumn and Adam didn’t know what type of vehicle to travel in next. They thought about vans, converting a schoolbus, teardrop trailers and Airstreams. But none of those rigs cut it.

They knew they wanted to do off-roading, and it really came down to the Four Wheel Truck Camper.

“We could work inside, cook inside, have a heater,” said Adam. “The camper would retain value, and it was rugged. The Four Wheel camper wasn’t going to break down and had longevity. Four Wheel Campers uses high-quality components in their campers, unlike some other companies that use particle board and cheap electrical and plumbing. The Four Wheel Campers use marine grade electronics and take pride in their product.” 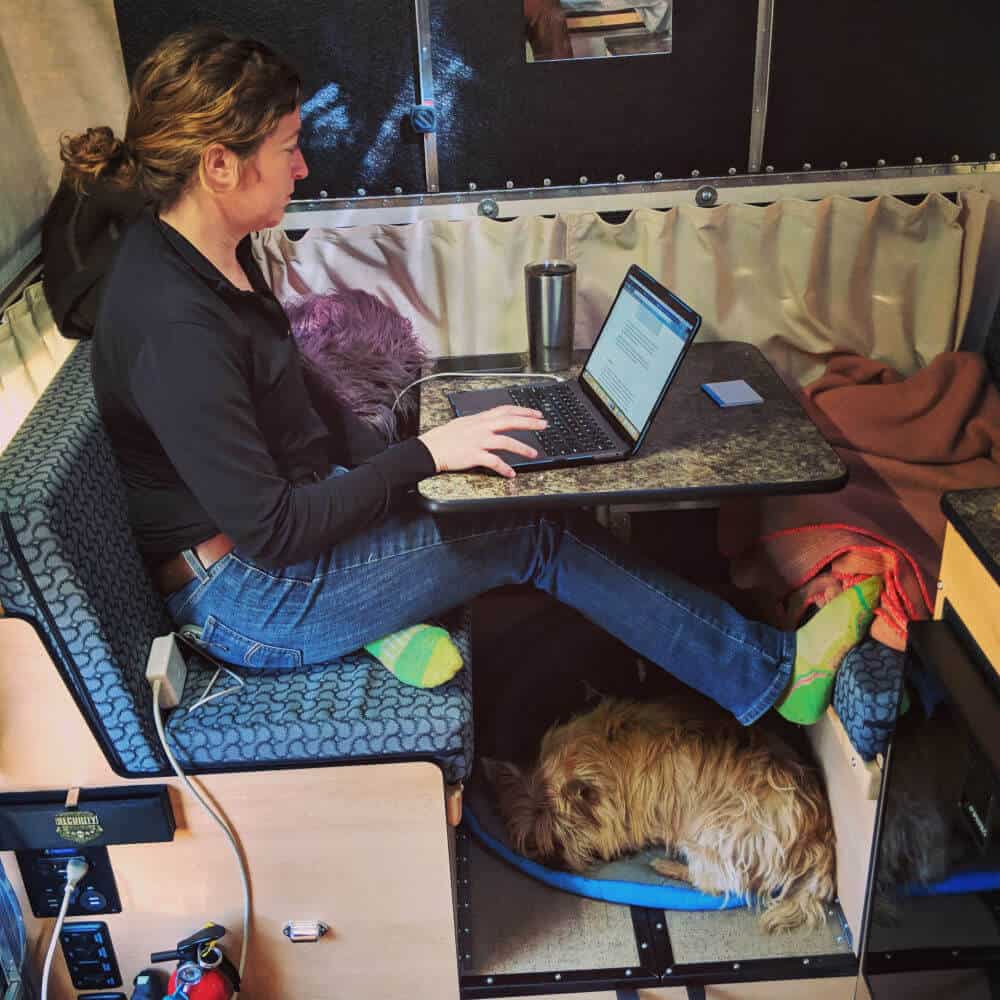 Autumn working at the table in her new truck camper

The two bought a 2005 Toyota Tundra flat-bed pickup and put the pop-up truck camper the back. So far, the couple says living in the truck camper feels like night and day.

“The worst part about the Land Cruiser is that I’d have to sit outside on a cold and rainy morning wondering what to do with myself,” said Adam. “There were two choices: stay in the tent or sit in the car. Now, with the Four Wheel pop up truck camper, I can work, surf the internet, relax in my pajamas.”

Autumn and Adam love that the Four Wheel Camper is rugged enough to go off-road, and the two plan to boondock in remote places.

Head here to look at the variety of pop up truck campers offered by Four Wheel Camper.

“We like that our pop up truck camper isn’t the size of a massive RV,” said Autumn. “It makes you want to go outside. It’s not too comfortable or huge and vast like you’re in a house. You’re looking out the window constantly. You’re still interacting with the outdoors and have a connection to being outside.” 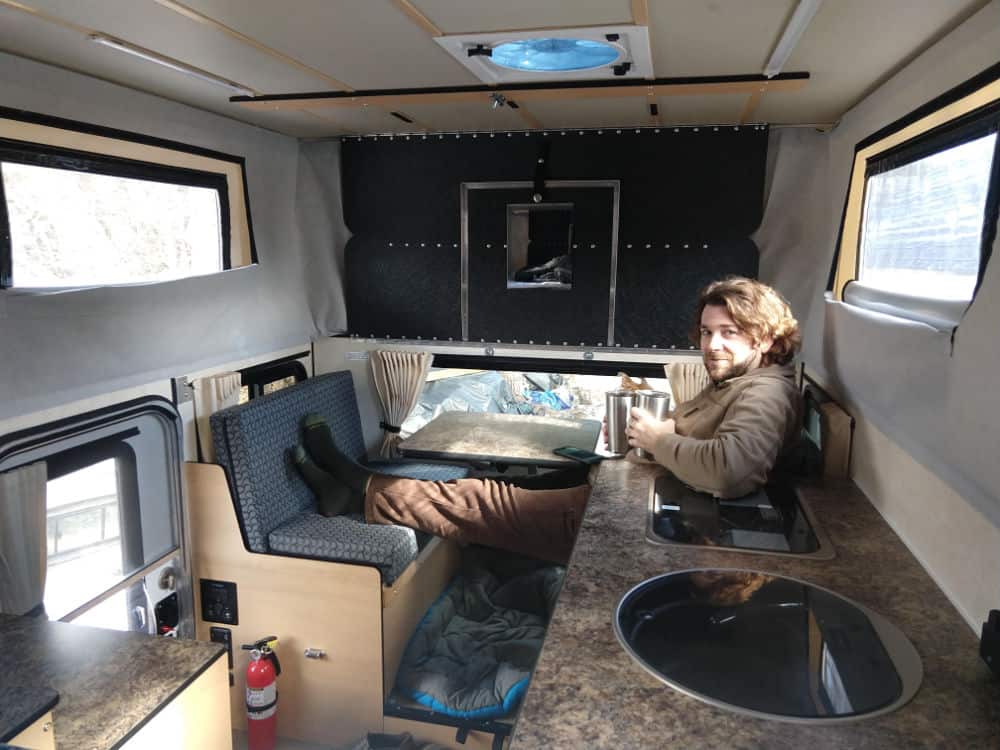 The interior of the truck camper by Four Wheel Campers

There’s a variety of ways Autumn and Adam make money on the road. Autumn is a published author and is always writing books.

They worked for the Overland Expo, and now they have temporary jobs working for a mobile surveying company.

Autumn said it is scary to quit your job and take the leap into full-time travel, but she and Adam have found opportunity everywhere.

“We’ve had so many offers to manage campgrounds for the summer,” said Autumn. “Then there was a cafe that tried to hire us for the season, a rancher that needed people to run tours and put in solar panels. There are so many wonderful people out there.”

Adam said it’s important to treat your travel like a lifestyle, not a vacation. 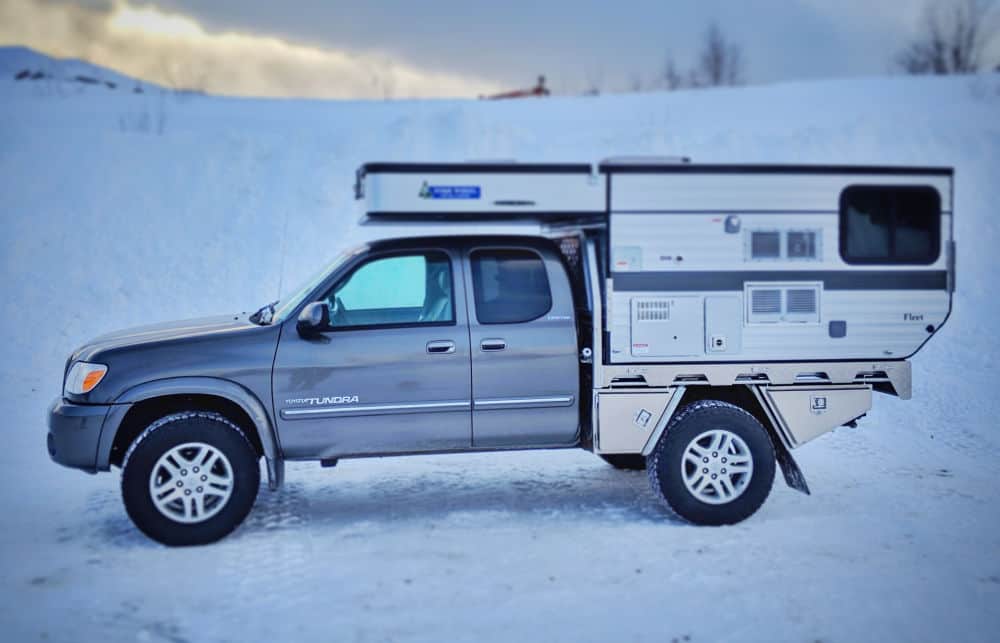 Sometimes, breaking away from societal norms can be hard. You’ll face judgment. Some people won’t understand. But Autumn said don’t let it get to you.

“Many people think we have two heads,” she said. “But there is a whole tribe of people out there who do this! You’ll meet them and it feels so good to be understood. People think this is a fantastic way to live. It’s so exciting seeing people moving away from the 9-5 and into contract jobs and the gig economy and building the lives they want. Not the lives they are forced into.”

Adam agrees. He can’t imagine ever going back to a 9-5.

“Travel changes you as a person. Once you get out there and live it, the idea of settling back down again and working in the traditional 9-5 becomes almost impossible. You have a whole new outlook on society,” said Adam.

Autumn and Adam plan on traveling as long as they see fit. They are currently working on starting their own online business where they’ll offer copywriting and web design services.

Check out their websites below:

And if you want to check out the Four Wheel Truck Campers for yourself, head over to the company website: