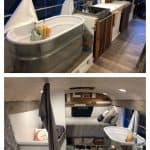 Converting a school bus into a tiny home gives people more flexibility when it comes to designing their living space.

School buses are built to carry children, which means they have an extra level of safety and hardy construction over traditional RVs.

Plus, a school bus conversion is upcycling at its best – taking something that’s no longer used for its original purpose and giving it a new one.

Living in a school bus is also the ultimate DIY project, which involves lots of learning, building and materials.

The result can be a gorgeous tiny home with your own touches, perfect for road tripping across the United States.

Why one couple choose a school bus conversion

Derek and Amy Cobia of The Frugal RVer didn’t start out with a school bus conversion.

Their first RV was a large 5th wheel camper hauled with a pick-up truck. They hoped to save money and travel, but soon realized it wasn’t going to happen.

“After living in it for a year we realized we weren’t cutting as many costs as we wanted and we weren’t traveling,” said Amy. “Plus, I couldn’t put my personal touch on the RV and that bothered me. Even hanging a picture wasn’t easy.”

Derek agreed: “The RV introduced us to the lifestyle so it’s hard to regret that move, but financially, it was a big mistake because we thought our RV could go anywhere. It couldn’t. We ended up paying $700 per month camping on top of the payment for our truck and RV.”

They wanted something off-grid and small enough to have a good turning radius.

So, they turned their attention toward living in a school bus conversion.

“School buses have steel-ribbed frames that go all the way the length of the bus so it’s almost indestructible in its design because it carries kids,” said Derek. “The more I researched, the more I realized we could have a quality school bus RV conversion for fairly cheap.”

How Derek and Amy designed their school bus conversion

They two started looking at school buses to convert and found one for just $3,000 and 27 feet in length. They started brainstorming ways to transform their school bus into a beautiful tiny home.

“We’re both bath people and that was a huge part of it,” Derek said. “We miss our bath from the house. We had a big garden tub and we’d sit in there and drink wine and it was a stress-reliever. That was a huge priority, which is why we have a massive bath that takes up 15% of our home.”

Their budget was $15,000, including the school bus, and the couple thinks they may have gone a little over, but still ended up under $20,000.

They have everything hooked up for solar for boondocking – the electrical system alone was $6,000.

“We went small (27 feet in length), because we wanted to get off the beaten path camping,” said Derek “Our biggest goal was to be self-sustainable and be able to live very cheaply. We realized quickly with RVs that we’d have to tie into the grid, so we decided to go off-grid indefinitely. Our solar panels can last three weeks.”

He said its harder to maneuver the bigger school bus campers, so some people who buy those feel frustration.

“We lived the RV lifestyle and knew we didn’t need much and were going minimalist,” Derek said. “So a school bus conversion was perfect for us.”

The school bus conversion even includes a little bed for their 2-year-old daughter, who so far is loving the skoolie life.

“She gets excited when she sees it,” Amy said. “We have her car seat set up on the school bus so she can see out the front windows and the side windows. The windows roll down and blow fresh air and she loves it.”

So far, the family of three has driven across the United States, mostly boondocking, or camping for free. They’ve only spent $50 on their journey.

“We’re still on a high so it’s pretty amazing right now,” said Derek. “It’s starting to sink in that this is our life now. For the most part, it’s felt like a vacation.”

They plan on traveling indefinitely and say if you’re thinking about doing it, do your research and understand the costs before committing to a school bus conversion.

“Overall, I’d want to encourage people to do it,” said Amy. “It’s been a breath of fresh air for me and Derek and our daughter, and it’s freeing. It’s so freeing to get rid of all your stuff.”

Patrick Schmidt of Skoolie Love was living in Seattle when he first wanted to buy a school bus to convert into an RV. He searched Craigslist for days, eventually finding a 34-foot blue school bus for sale in California. It had once belonged to a church.

So, he flew to get it and got a good deal.

“I bought it with just 68,000 miles on it. It was for sale for $5,500 initially, but when I told the pastor I wanted to travel and expand my life and have adventures, he was thrilled and sold it to more for just $4,500,” Patrick said.

To qualify as an RV, the school bus conversion needed a few key renovations.

A bed, a way to cook, a way to provide cooling and heating. Patrick decided to install a hot plate and plumbing for a toilet, water and a shower.

“I then traveled for two months,” Patrick said. “I saw 36 states and went 20,000 miles in my skoolie conversion. I didn’t want to do the rat race anymore, I wanted to see how else you could live. I wanted a place to call my own.”

The downside of living in a school bus conversion

While Patrick enjoyed his newfound freedom, he also found it challenging to live in a school bus conversion.

Many campgrounds only want RVs, or vehicles less than 10 years old.

School buses are conspicuous to park on city streets. If you want to settle down in a big city in a skoolie, it’s not easy finding a place to legally park it. Stealth camping is totally out of the question.

“Some big cities don’t even allow tiny homes. They want you to have a foundation and take the wheels off,” he said. “Then,  I looked into buying a plot of land to park the bus on. But you find other hurdles there. In some residential areas, you can only park for 30 or 90 days as its residentially zoned. They want you to prove you’re going to build something, not just camping.”

He said finding insurance for a school bus conversion is also a challenge.

“It’s such a heartache. For them, it’s a liability. They don’t know how you did the plumbing, whether it will light on fire at a campground, will it leak going down the road,” he said. “Initially I paid $500 for a year, but then they wanted $800 for six months, and they kept raising it or changing it. It became such a problem that I was telling people not to get into buying a school bus, it will be stressful and difficult.”

Patrick said he’d be the first to tell someone not to live in a school bus conversion.

“It’s because of the insurance, knowing that when you’re driving around you could get a flat tire,” said Patrick.

“You need to have savings. You have to be aware that you live in a bus and will have to park in weird areas sometimes. I’ve woken up a lot at night. One time these kids were walking by and wanted to climb a ladder up to the roof. I was wide awake, in the back bedroom wondering if they were going to climb it, but luckily, nothing happened.”

He said his school bus conversion only gets 7 to 9 miles per gallon, which is very expensive if he wants to keep moving and traveling. So, he started a business selling t-shirts.

He does hope that the more people who live in a school bus camper, the more that things will change.

Maybe cities will be more welcoming to school buses.

Maybe there will be better places to park.