Skip to content
*This post may contain affiliate links, which means I may earn a small commission at no extra cost to you. Please read our disclosure policy for more info.
1931 shares 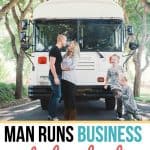 It’s not a normal situation for a family of five, but Brandon Trebitowski and his family wanted to do something a little different by living in a custom school bus for six months.

And if that’s not a big accomplishment, he also pulled in 7-figures with his start-up company, Pixegon. Impressive, right?

He and his wife Ashley first got the idea to move out of their beautiful, 2,100 square foot home in a suburb of Albuquerque when a couple of their friends starting living in a custom school bus. So, he tracked down a beat-up bus for $4,000 in Texas, and started making it into a tiny home.

“It was a straight-up school bus,” Brandon said. “All the seats were still in, the driver’s seat was nasty and dingy, it was disgusting inside. When we started gutting it we found old notes and pictures of kids and erasers and things you’d find in a school bus.”

How they created their tiny school bus home

They started building out their custom school bus by gutting the bus and noticed everything was rusted out and in disrepair. So they hauled out the seats, treated the rust and started building it out from there. They used spray-foam insulation and his wife built the coffee table, the tv stands and things like that. She did a lot of the woodworking and framing, while Brandon worked on the electrical and plumbing in their custom school bus.

“The bus is comfortable from a sleeping perspective,” Brandon said. “We put a king-sized bed in the back. The kids each have their own six-and-a-half-foot bunk. We have a composting toilet, a simple shower with a pan, a 12-gallon hot water heater, 100 gallons of fresh water on the roof and 400 watts of solar on the roof.”

He said the hardest part about adjusting to living in a converted school bus was lack of space. Their kids were 2, 5 and 7 when they moved onto the bus full-time.

“The kids were rowdy,” he said. “Our initial intent was that we’d spend most of our time outside, but that became challenging when the weather was rough. We spent a lot of time in Wal-Mart parking lots and would rely on finding parks and being intentional about doing things outside.”

Sign up to download seven of my favorite recipes for a small space! From chicken piccata, to shepherd's pie, to beef picadillo, these are sure to make your mouth water.

Success! Now check your email to confirm your subscription.

What they learned living in a custom school bus full-time

The family lived and traveled in the custom school bus for six months while Brandon ran his company, Pixegon, which raked in $1.3 million in revenue in 2016. He said his family has learned a lot of valuable lessons living on the bus.

“We learned how living small eliminates a lot of distraction and allows you to focus on relationship and family. Everything we owned was in 200 square feet, so it forces you to scrutinize everything you’re going to bring into your life and not just the physical things, but technology,” he said. “People are just mindlessly reading these news feeds with fleeting information, and we’re feeling tired and overwhelmed.”

The Trebitowski family has now settled in Albuquerque where they’re launching another start-up company, with plans to buy land build a home. The bus will be relegated to adventures and travel, which could go for months at a time.

He hopes now, they can take the lessons they’ve learned from living in the bus to living in a “right-sized” home.