Our problems began at minute twenty of our year-long trip. We pulled into a grocery store, and a woman working at a bakery across the street sprinted towards us through four lanes of traffic.

“What is this?” she asked as I loaded cans of chickpeas and soup into the drawer under our couch.

I turned to load the last can of soup, and when I turned back, the woman had climbed into our bus and was leaning by the driver’s seat.

“Do you mind if I take a few pictures?” she asked.

The woman had climbed into our bus. “Do you mind if I take a few pictures?” she asked.

Before I could find a way to politely say, “Actually I prefer not to interact with humans, please step ten feet back and forget I exist” she’d already pulled out her phone and was taking snaps of our kitchen, couch and toilet.

“One more,” she said, and she herded my wife and me outside to take a picture of us in front of our bus.

“I have a feeling that’s going to get old pretty quickly,” I told my wife after the woman left.

“Oh come one, she was nice,” my wife said, but my wife and I have two very different natural states of being. 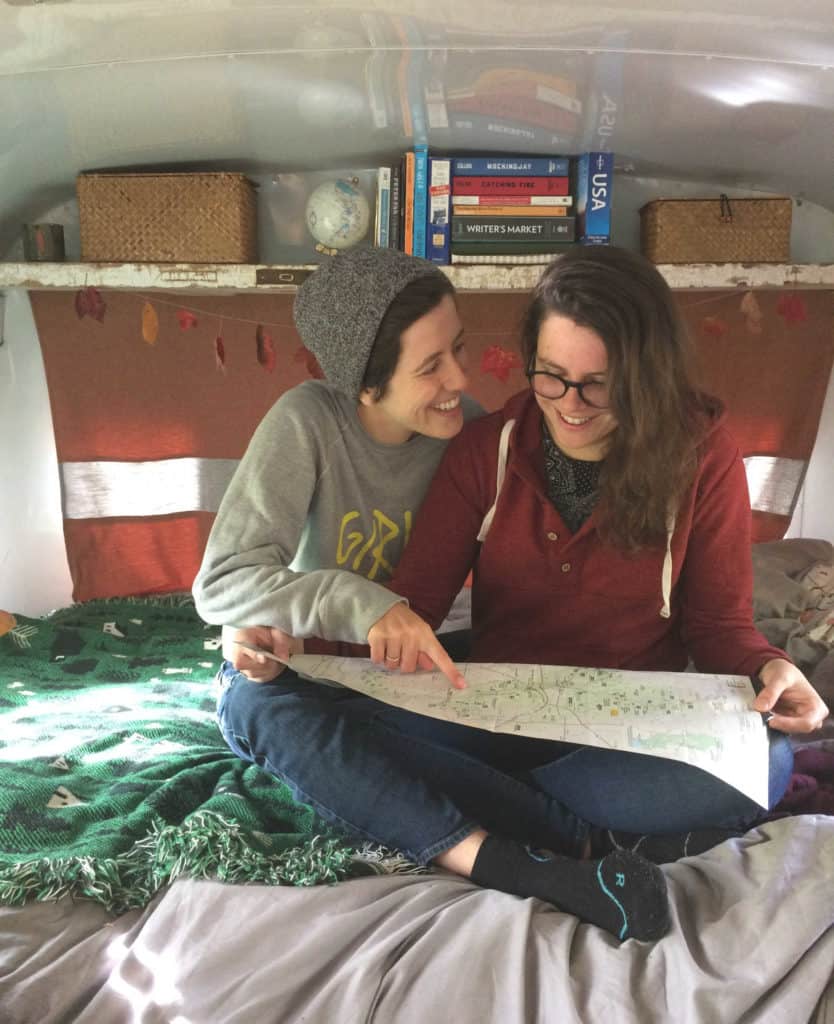 Jane and her wife inside the purple school bus. Photo credit: Jane Ozkowski

My wife is more like a golden retriever, full of energy and ready to make instant friends with just about anyone.

Meanwhile, I’m more like a troll that lives by the river and whittles horse figurines out of the garbage washed up onshore.

My wife pulled our bus onto the highway, and I watched drivers on either side of us do double-takes as they passed.

“Yes, it’s a school bus,” I felt like shouting out the window. “Yes, it has a kitchen inside.”

“Yes, it’s a school bus,” I felt like shouting out the window at everyone staring. “Yes, it has a kitchen inside.”

But at the same time, if I saw a purple school bus speeding down the freeway, I’d stare, too.

Stealthy in a purple school bus? I don’t think so.

The minute we bought our bus, we gave up all hope of being stealth. Firstly, the engine sounds like someone put a handful of nails and a couple of bulldogs in a blender together.

No matter how many coats of paint or what quality of black-out curtains we buy, nothing is going to hide the fact that two deadbeat vagabonds are clearly squatting in a sacred vehicle once used to transport innocent children.

The engine sounds like someone put a handful of nails and a bulldog in a blender.

So instead of stealth, we tried to find a way to make our bus look wholesome and non-threatening. We figured if we painted it purple with white mountains, people would be less likely to think we were there to abduct their children or turn their pets into loincloths.

It worked, sort of.

Fast forward to about a week into our trip and one of our first nights of stealth camping, which for us is just regular camping because there’s nothing stealth about a purple school bus.

The people stared at us the way you might not be able to look away from a man picking bits of gum off the sidewalk and eating them.

We were parked at a beach in a small town where the people there had obviously never seen a purple school bus with mountains painted on the side. Instead of curiosity, though, we instantly felt a vague sense of hostility towards everything we were and everything we were doing.

The people stared at us the way you might not be able to look away from a man picking bits of gum off the sidewalk and eating them.

We tried to close our curtains and later leave our bus completely, but we could still hear people talking about the purple bus that had shown up in the beach parking lot.

Even as the sun set and the beach traffic thinned out, the strange looks continued, and late into the night some teenagers started playing Nicky Nine Doors on the side of our bus.

Then we thought…do we have to change our skoolie tiny home?

“Maybe we should repaint our bus,” I said to my wife in the morning.

“Yellow again, or white with some slogan about the golden years like we’re from a retirement home?”

“We can’t make it look too much like a retirement home bus. What if old people get confused and climb on? Then we’d have to drive them to Aquafit and to look at the fall colors.”

“I wouldn’t mind. Those are the kind of friends I want to have.”

“Let’s give it a week or two,” my wife said. “It’s not like we’re going to repaint right here in the beach parking lot anyway.”

I shrugged, but I wasn’t convinced.

An hour later, we pulled into a gas station and the woman pumping gas beside us smiled.

“Thanks,” I said, looking away. I had barely gotten any sleep the night before, and we had about 400 miles to drive that day.

“No, I mean it,” the woman continued. “The paint job is beautiful.” 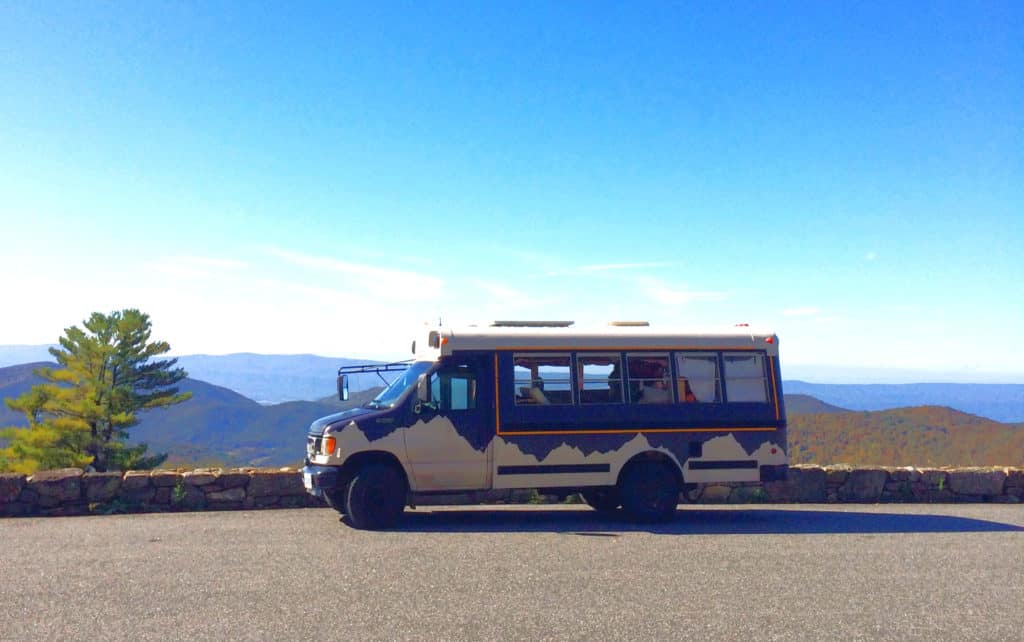 I thanked her again.

“Are they any particular mountains?”

I held back a sigh and went into my now well-rehearsed speech about how the mountains on our bus are based on a mountain range my wife and I saw in Iceland.

I was ready to climb back into our bus and drive away as fast as possible, but the woman had been to Iceland the summer before, and before I could get away, she went into telling me about her favorite hike, and three-day trek that my wife and I had wanted to do but hadn’t.

I pulled back and looked the woman up and down. She didn’t seem like the kind of person I’d have anything in common with, but maybe I was wrong.

She didn’t seem like the kind of person I’d have anything in common with, but maybe I was wrong.

It was a quiet gas station in a small town I didn’t know the name of, and with no one pulling in behind us waiting for the pumps, the woman and I kept talking. I told her about our bus build and the trip we had planned, and a few minutes later, I invited her into our bus to give her a tour.

Finding my extrovert in a purple school bus 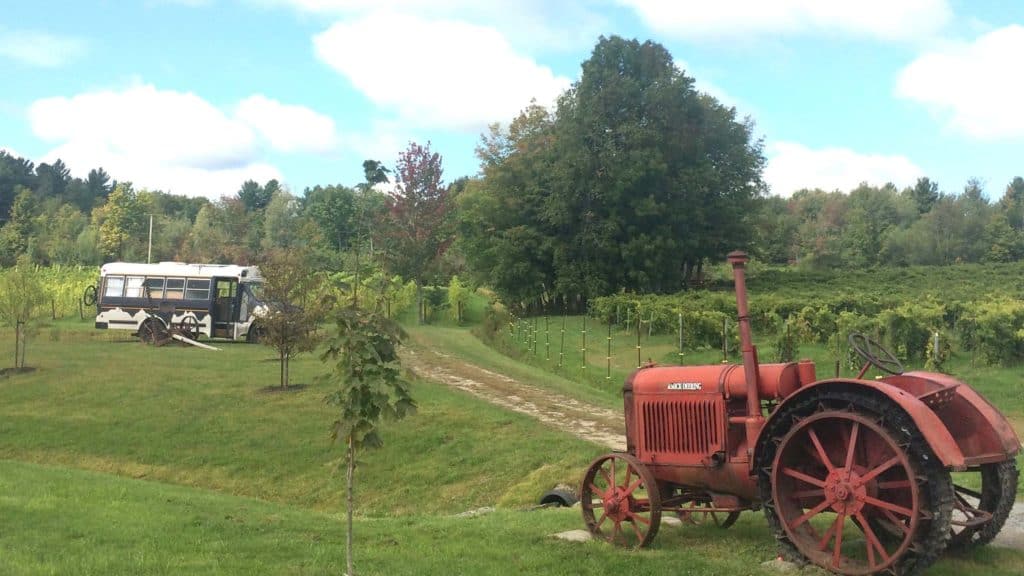 The whole interaction was only ten minutes maybe, but when the woman left, she wrote down her contact information and her address in Maryland.

“If you’re ever in the area and need a place to stay, let me know,” she said. “I’d be happy to show you around and make you a home-cooked meal.”

As the woman left, I looked down at the paper, and my wife raised her eyebrows at me.

We’ve learned to ignore the stares, and the attention we get is mostly good attention.

“Still want to paint the bus?” my wife asked.

Things got better from there.

There are still times when we feel like absolute idiots to be driving around in a purple school bus, but we’ve learned to ignore the stares, and more often than not, the attention we get is good attention.

Life on the road can be lonely at times, and what’s a better conversation starter than pulling up anywhere in a purple school bus?

We’ve been traveling for three months now, and if nothing else, living our bus is forcing me to discover my inner extrovert that must have been there all along.

Jane Ozkowski is originally from Ontario, Canada, but as she travels through North America, she calls her short bus, Marilyn, home. Her YA novel, Watching Traffic, was published in 2016. You can follow her travels at: www.camplovesick.wordpress.com.