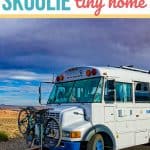 Heather Yandziak and Nicholas Underwood are living the dream traveling in their 120-square-foot short bus, which they bought off Craigslist and converted into a tiny home.

The two spent one year renovating the 1998 Thomas Vista 3600 into a school bus camper. The tiny skoolie runs on solar power, has a living room, dining area, office, guest bed, bedroom and storage.

The bus, dubbed Vicaribus, has been all over the United States in the past three months and is just the cutest skoolie I’ve seen.

So, I wanted to catch up with the couple to see how they picked their skoolie and what went into converting their bus into the perfect little camper.

What made you decide to live in a skoolie full time?

We both love to travel and have been fortunate enough to go to lots of places all over the world. A few years ago we moved to Denver from Atlanta just to try somewhere new as a home base.

After a couple of years in Denver, we started discussing what we might do or where we might go next and eventually decided we just wanted to travel the U.S for a while, since there was so much of it we hadn’t seen.

I always have at least some sort of DIY project going on, if not several, and the huge challenge of converting a skoolie was very appealing to me. Plus, we both loved the idea of having a vehicle that was designed exactly the way we wanted it and completely unique. Oddly, we never even considered any sort of traditional RV.

How did you pick this particular school bus?

After some consideration over what type and size bus would be best for what we wanted to do, we ultimately determined we should look for school bus of medium length to give us the perfect mix of maneuverability and interior space.

We opened up Craigslist’s Florida listings and started the hunt. We chose Florida because I was still technically a resident of Florida and that’s where we wanted to have the bus titled.

Two weeks later I was on a plane to Tampa to buy the first skoolie we looked at. That’s no joke. We immediately fell in love with what is now our 1998 Thomas Vista 3600, which happened to be the first one we saw on Craigslist.

At the time, the current owners had already given it its white and blue paint job, and had already ripped out the seats, replacing them with some cheap flooring and a couple of couches. The nice paint job and already removed seats combined with its adorable snub-nosed look were enough to convince us that this was the bus for us.

What advice do you have for people who are wanting to choose a skoolie to live in?

What should people watch out for when looking at skoolies?

What design did you use for the interior of your skoolie and how did you fit all that into 20-square feet?

In the very back of the skoolie, we have a queen-sized bed sitting about three feet off the floor with lots of storage under it. The storage can be accessed from the back of the bus or from inside the bus by lifting the bed.

It was quite a challenge fitting everything into 120-square feet. We pretty much just started with our basic idea and figured it out as we went. We built from the front to the back, section by section. We also made sure to use the minimal amount of material needed to not waste any space, and we were able to create all kinds of storage nooks as we went.

What was the hardest part about converting your skoolie, and what do you wish you’d known more about when you started?

One of the more tricky parts of the school bus conversion was custom building a waterproof wet-bath to house our composting toilet by Nature’s Head and on-demand shower.

The dimensions of the space we left for the bathroom were too small to use any off-the-shelf shower parts, which would have made the build much easier. We got everything to fit and work in the end, but is probably our least favorite part of the build.

Also, we have never used the shower! Our water tank is pretty small and a shower would use it up quickly, and pretty much everywhere we stay also has a shower, so we just use those and body wipes to stay fresh the couple days in between.

If we did it again we wouldn’t worry about the shower and waterproofing of the bathroom, which would have saved lots of money and time.

What are the best parts about living and traveling in the schoolbus? Do you ever wish you’d chosen an RV instead?

Without a doubt, the best part is the freedom. The whole point was and is the freedom. We get to go anywhere and do anything we want (within reason) and completely on our own schedule. If we like an area we can stay as long as we want. If we end up somewhere we don’t like, we just move on. It’s amazing!

There would probably be a couple of benefits to having a traditional RV, like a more comfortable drive and potentially better gas mileage, but so far having this completely custom and unique home has far outweighed those benefits.

How do you two make money while traveling in your skoolie?

We saved up as much as we could beforehand to make it a bit easier. I have been working as a remote freelance software engineer for quite some time now, so it was fairly easy to transition that to school bus life. I have dialed down to part-time, so we just have to make sure we have a good internet connection a couple of days a week.

Heather is on sabbatical during this first year, but eventually, we will slow down our travels so she can start doing 13-week gigs as a Travel Physical Therapist.