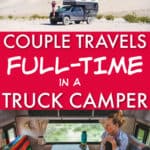 Mak and Owen are no strangers to living on the road. So far, they’ve lived in four different rigs over 3.5 years, traveled to 38 states, and now have plans to take their brand-new Four Wheel truck camper down to Mexico and South America.

But getting ready with their mobile lifestyle wasn’t easy for the couple, who worked corporate jobs and owned a home before pursuing a different type of American dream.

“Deciding to take the leap was scary,” said Mak. “Once we made it our goal to live the van life, we worked hard to make it happen. That meant learning how to work remotely and dealing with our accumulation of stuff.”

“Transitioning to freelance, remote work was the hardest part of preparing for life on the road.”

Mak and Owen spent two years preparing to live the van life. They bought a VW Westfalia they named Stanley and started their own businesses. 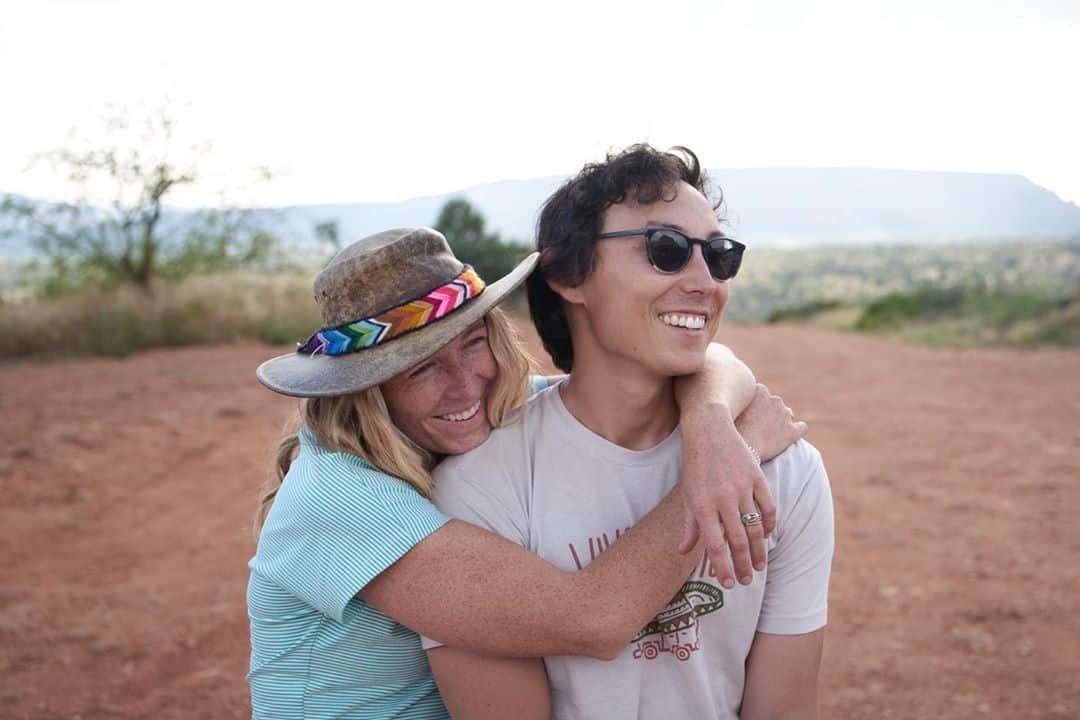 It took Mak a little over one year to get off the ground as a self-employed graphic designer, and Owen 6 months to start bringing in an income doing motion graphics, or animated design.

“Transitioning from a studio to a freelance career was the hardest and longest part of preparing for life on the road,” said Mak. “We also spent four months working at a tiny desk together to make sure we could work in such close proximity.”

Once they took care of the remote work hurdle, next, was stuff. They rented out their home and got rid of most of their belongings.

Finally, Mak and Owen were free.

Living the van life in a VW Westy 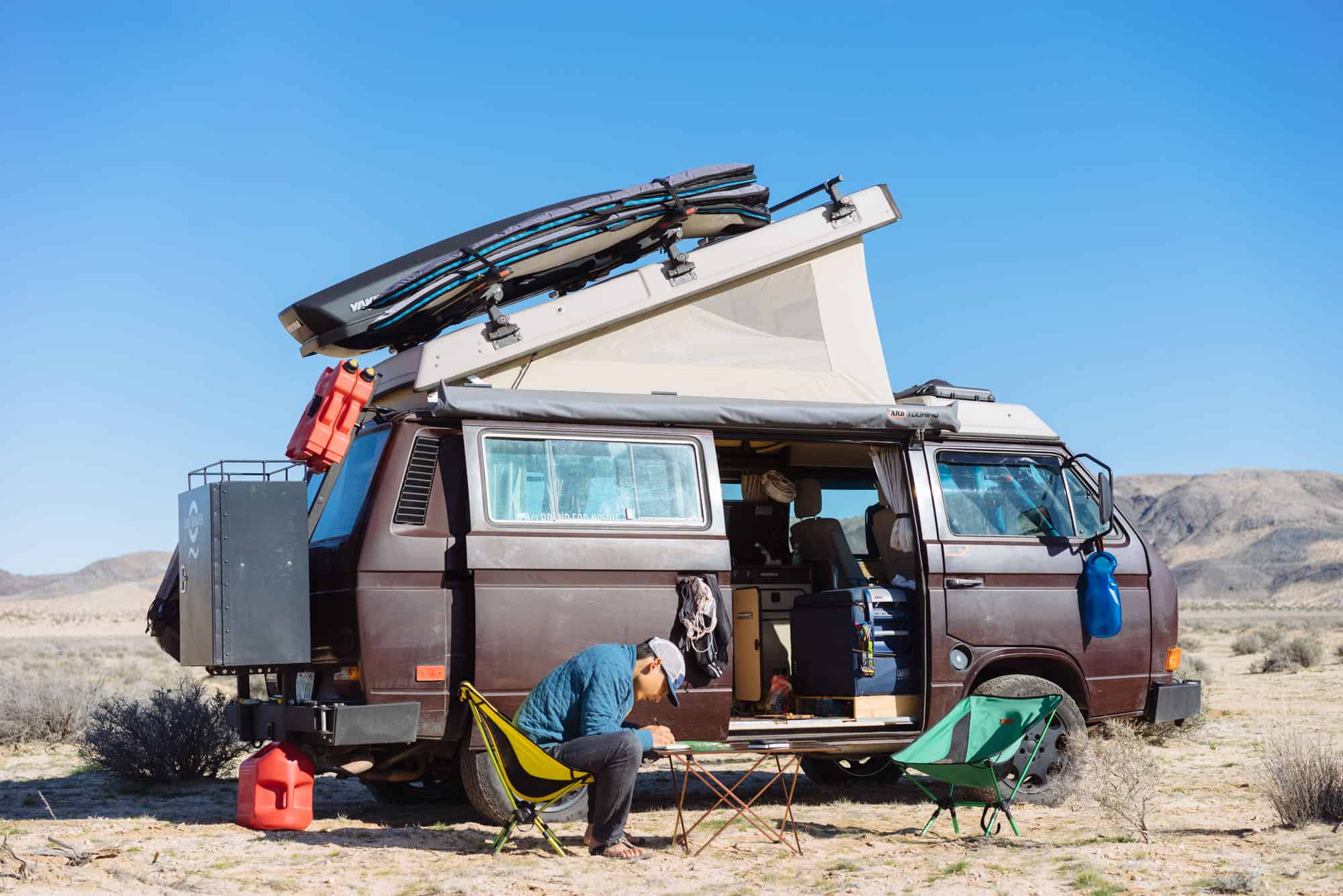 Living the van life was like a breath of fresh air for Mak and Owen. They worked when they wanted, traveled to national parks and enjoyed everything nature had to offer.

“There was no adjusting needed,” said Mak. “It was something we’d been looking forward to for so long that it felt like a sigh of relief when we finally hit the road. If there was anything REALLY to adjust to, it was just that we no longer had massive goals looming on the horizon, but that was only because we had achieved them.”

They loved being able to decide where they wanted to be, what they wanted to do with their time, and no one having any say or control other than them.

But the VW had its fair share of problems.

“I’m a firm believer that the Westy platform is the perfect living space for full-time life on the road, but we just couldn’t deal with the inconsistency from a mechanical standpoint,” said Mak.

“Stanley nearly bled us dry of all our money on more than one occasion,” said Mak. “Our symbol of freedom was the one thing that was holding us back.”

So, they made the decision to sell their beloved Westfalia. 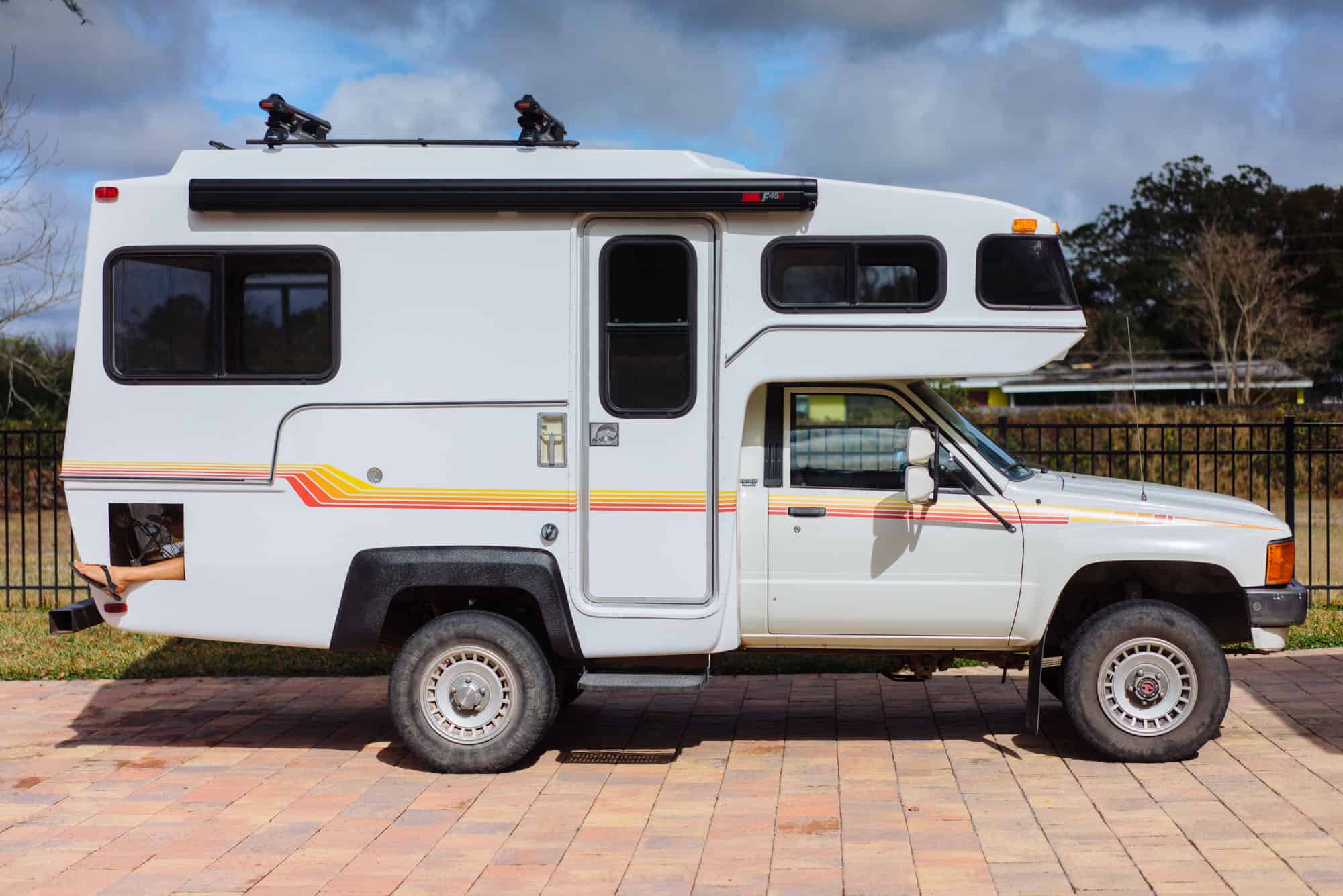 After the sale went through, Mak and Owen started working on another unique vehicle: a 1985 Sunrader 4×4 with just 90,000 miles. Sunrader only made 28 of these RVs, and the couple was thrilled to have one.

They spent nine months living at their parents’ house, building out their dream RV named Amelia.

“Being off the road that long, I started to feel like an animal trapped in a cage. Towards the end, I was miserable, which I feel bad saying. We were in Florida, surrounded by loving and supportive family, but I just couldn’t shake the feeling that I have living on the road,” said Mak.

But, when they started driving down the highway, Mak burst into tears. Something wasn’t right about the Toyota Sunrader. She was top-heavy and wasn’t going to be able to take the two on the off-road adventures they craved. Plus, Mak didn’t think it was the right vehicle for their long-term goals.

“It turns out both Owen and me had a sneaking suspicion that Amelia wasn’t going to work out for us. Vocalizing those thoughts while sitting in a home we’d spent eight months building was gut-wrenching,” said Mak.

So, they pulled over on the side of the road and made a really hard decision, to sell the RV they’d spent months turning into a home.

Up next……a Toyota Tacoma with a shell 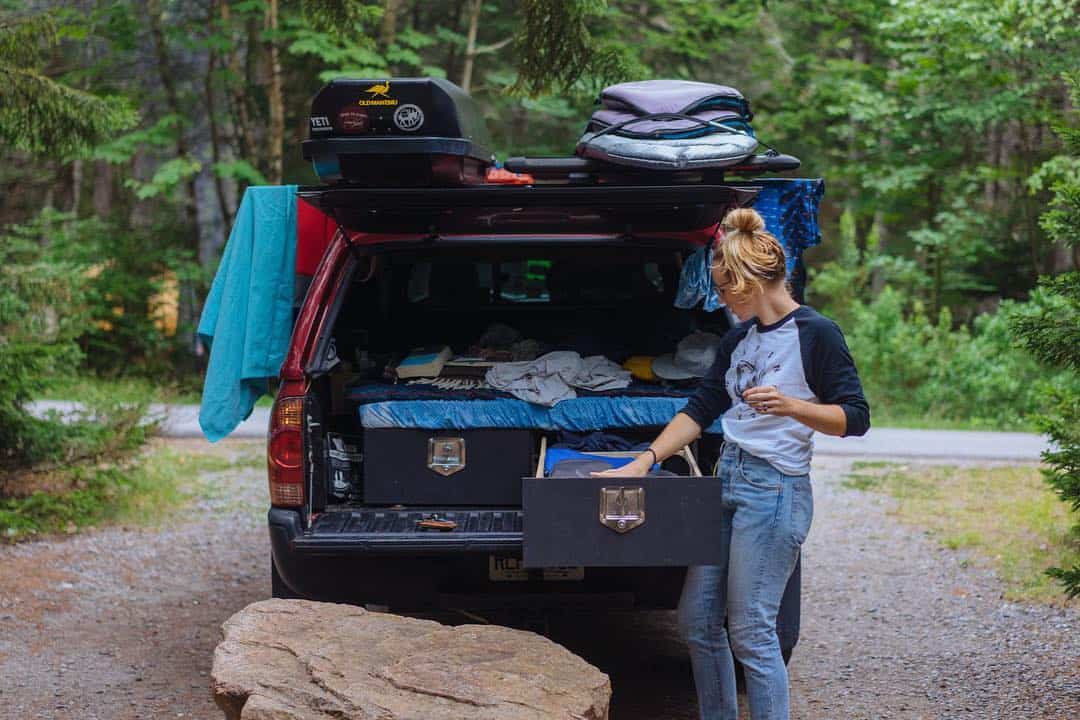 Mak and Owen’s next rig was a Toyota Tacoma named Lando with a shell camper. They spent just $400 turning the shell camper into a cozy home with a platform bed and storage.

“We needed something simple and fast to help us fall back in love with being on the road,” said Mak. “We needed to take some time to reflect on Amelia and why she didn’t work out for us.”

Once again, the couple hit the road, falling back in love with van life.

“Getting our sense of freedom back was amazing,” said Mak. “It was instantaneous. The minute we pulled onto the highway, and knowing that nothing stood between us and Newfoundland and Labrador. I wish I could give that feeling to everyone. Open highways and a capable and reliable vehicle can make you feel like anything is possible.”

“Open highways and a capable and reliable vehicle can make you feel like anything is possible.” – Mak

With their rig, they went from Florida, up the Appalachian Mountains into New Brunswick, Prince Edward Island, Nova Scotia, Newfoundland, the Trans-Labrador Highway through Labrador, all of Coastal Quebec, Ontario, then back into the States via Michigan and then all the way back to Florida!

“Our time in Lando brought us a world of clarity to our long-term goals and which home on wheels is right for us,” said Mak.

So, they moved over to their next, and hopefully final, home on wheels.

Their final home is a Four Wheel Truck camper 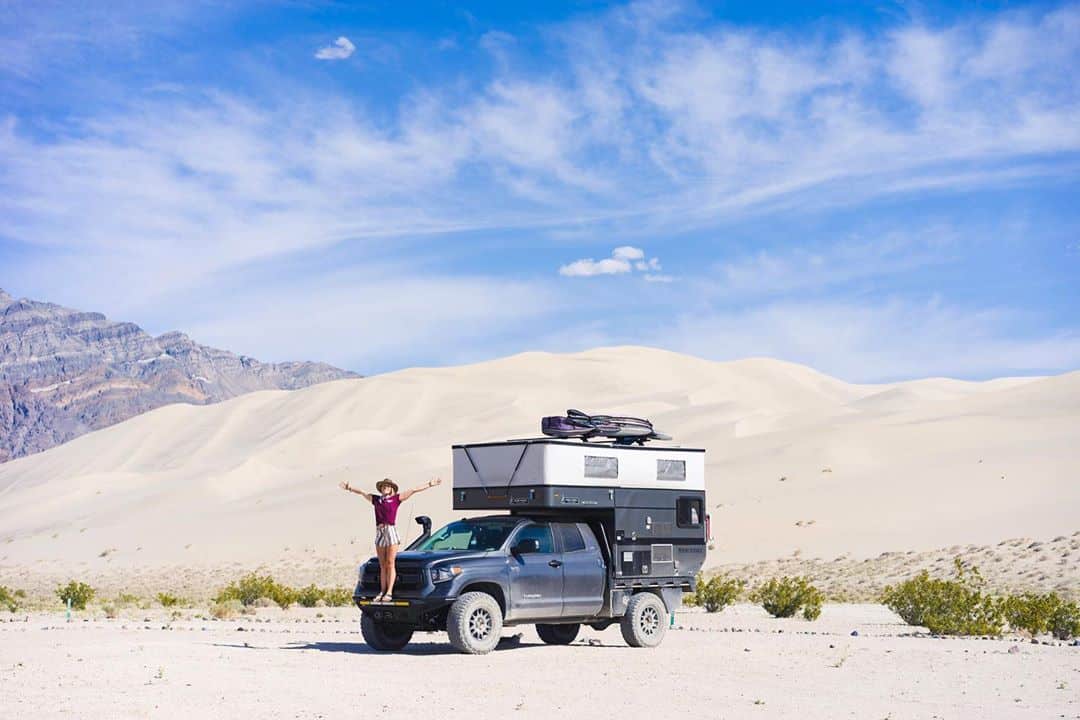 The camper is spacious yet rugged, meant to take them to far off, distant lands. It’s built on top of a brand-new Toyota Tundra and has all the amenities the couple needs to work remotely and explore.

“She is everything we hoped for and we’re so excited about this new chapter in our lives,” said Mak. “It’s really hard to describe how great of a feeling it is to end up with a rig like this.” 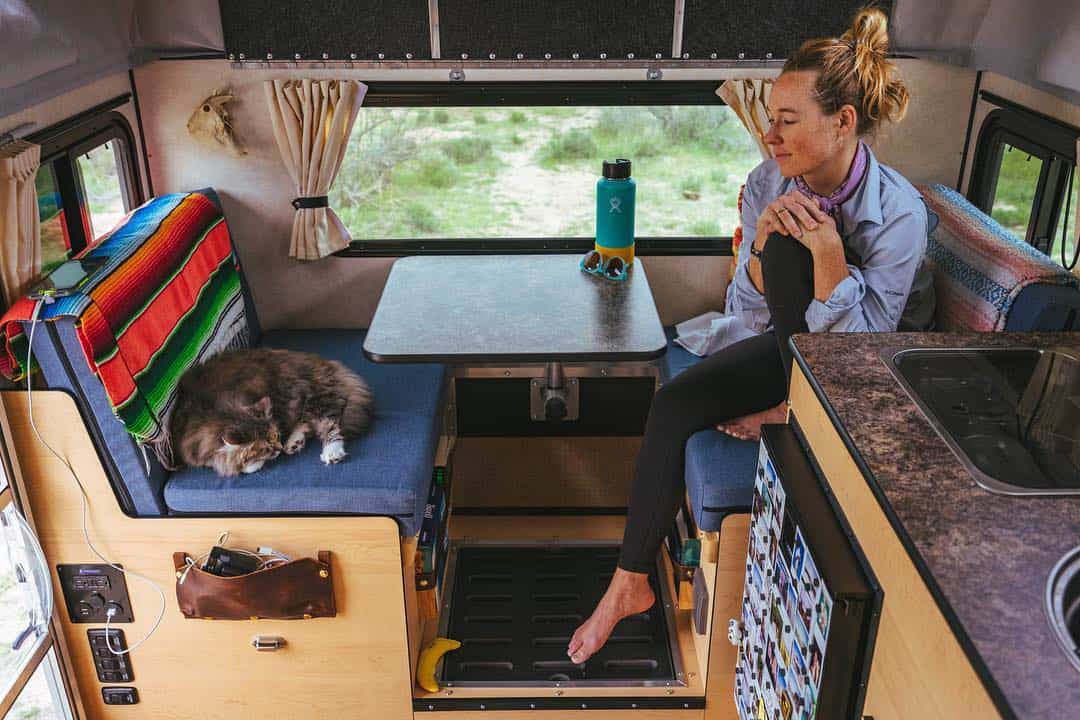 So far, Mak and Owen have explored Florida, Alabama, Mississippi, Louisiana, Texas, New Mexico, Arizona, California, Utah, Colorado, and a little in Mexico in their new truck camper and just love the way she handles off-roading.

Eventually, they’ll drive the Four Wheel Camper down to Latin America, or even ship their camper overseas.

There are no plans to stop traveling. The two love their life of freedom, adventure, and enjoying the outdoors.

Mak easily summed it up like this: “I’ll only stop doing this the day I don’t feel trapped by a house.”

“I’ll only stop doing this the day I don’t feel trapped by a house.” – Mak