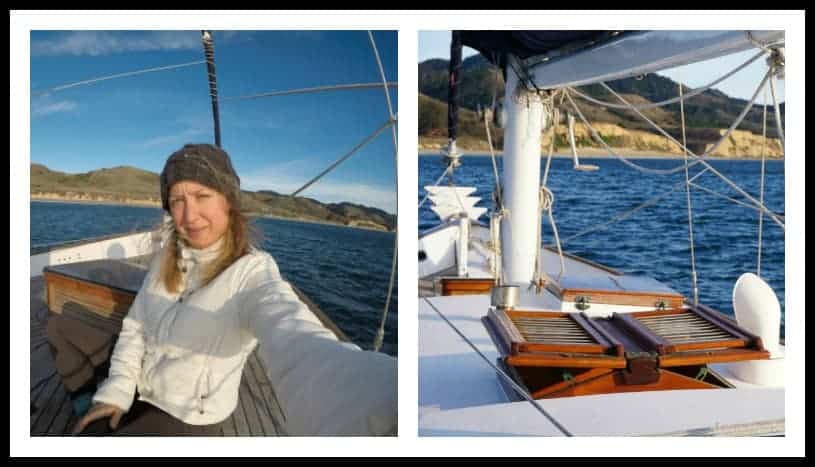 *This post may contain affiliate links, which means I may earn a small commission at no extra cost to you. Please read our disclosure policy for more info.
160shares 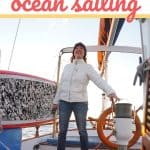 My first ocean sailing trip from the San Francisco Bay up to the Point Reyes National Seashore was nothing short of exhilarating, beautiful, exhausting and rugged. We wanted to test out our bluewater cruiser, a CT-41 sailboat, out on the open ocean. It was her first time going further than a few miles past the Golden Gate bridge, and we were excited to see how she’d handle in the swell and jagged offshore wind.

The winds were so strong just north of the Golden Gate that we put two reefs in the main, and the boat was still pointing her nose straight into the wind. It took a lot of steering to keep her on the right tack. We heeled over hard, and I was thrilled to be out there sailing in the ocean, with nothing but the rolling swell, the wind, and the barren land of northern California. Tom set up a makeshift jackline along the starboard side of the boat, and so he was able to clip in when he went forward to pull up the main. 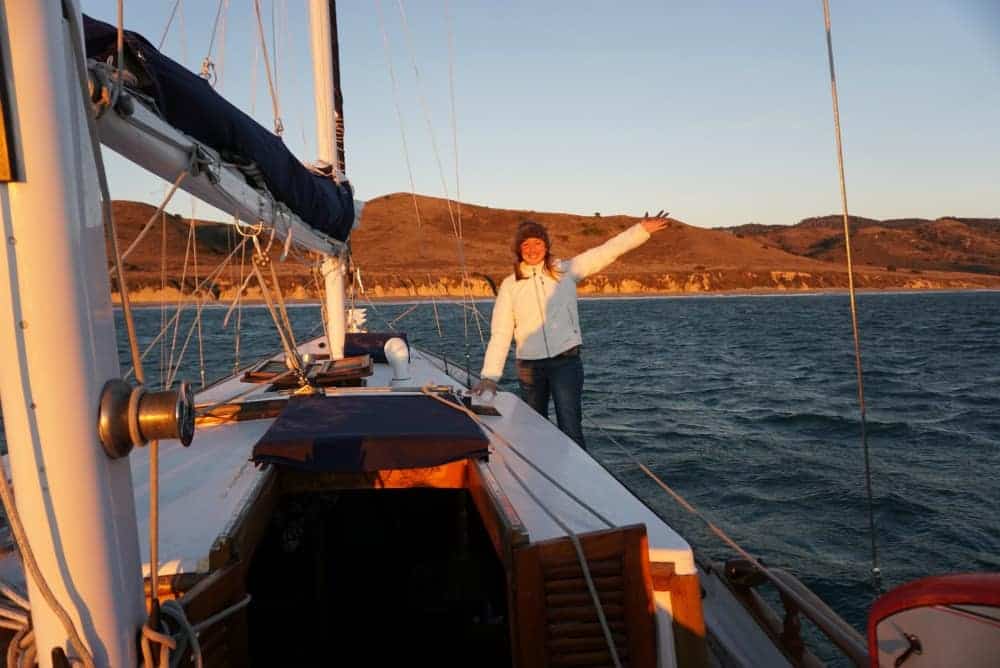 It took seven hours of ocean sailing to reach the Point Reyes National Seashore, and we realized the wind was coming dead east. Not a good direction for Drake’s Bay, where we’d planned to anchor, so Tom had to think on his feet and pick a new spot for us. We ended up anchoring in about 30 feet of water south of Limantour Beach, but the wind was strange as it moved over the hills. The boat couldn’t decide which way to point, so our anchorage felt rolly and wild.

I felt like I was in a new type of wilderness, far from any other sailboats, far from the Coast Guard, far from home. Everything out there felt intense. Every decision mattered. We could hear the surf break from the deck of the boat, which isn’t a soothing thing to hear when at anchor. Luckily, there was an offshore wind that first night, pushing us away from the beach. I stayed up on anchor watch until midnight, then Tom took over, waking up every 90 minutes throughout the night to check our position. The anchor held and the boat barely moved. We were safe.

Should we stay or should we go? 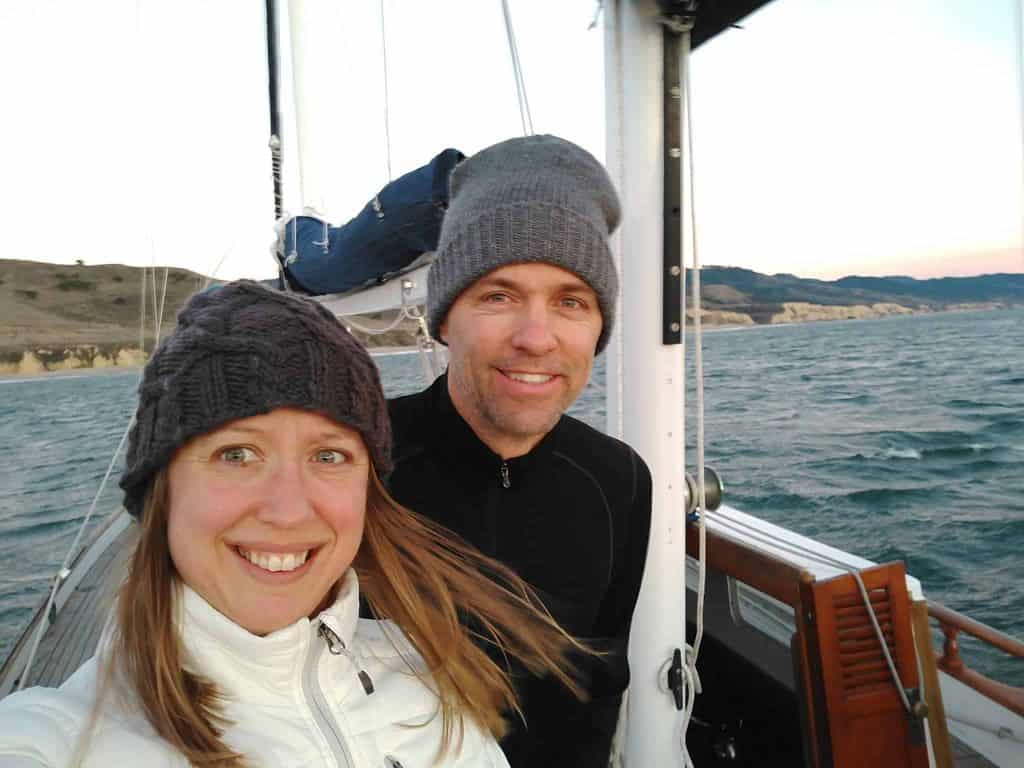 To say the least, we were exhausted when we woke up the next morning. It was still crazy windy, and we listened to the NOAA weather reports to decide whether to head back home, but the wind direction and tides dictated another 24-hours at anchor. We were both feeling a bit nauseated due to the rolling nature of the anchorage, and we drank ginger tea and watched a movie to take our minds off the motion.

That night, I made Italian sausage pasta in the pressure cooker from this cookbook I’m totally in love with, Pressure Cooker Perfection, and we ate a hearty meal before Tom headed to the stateroom to try to get some sleep around 7:30 pm. 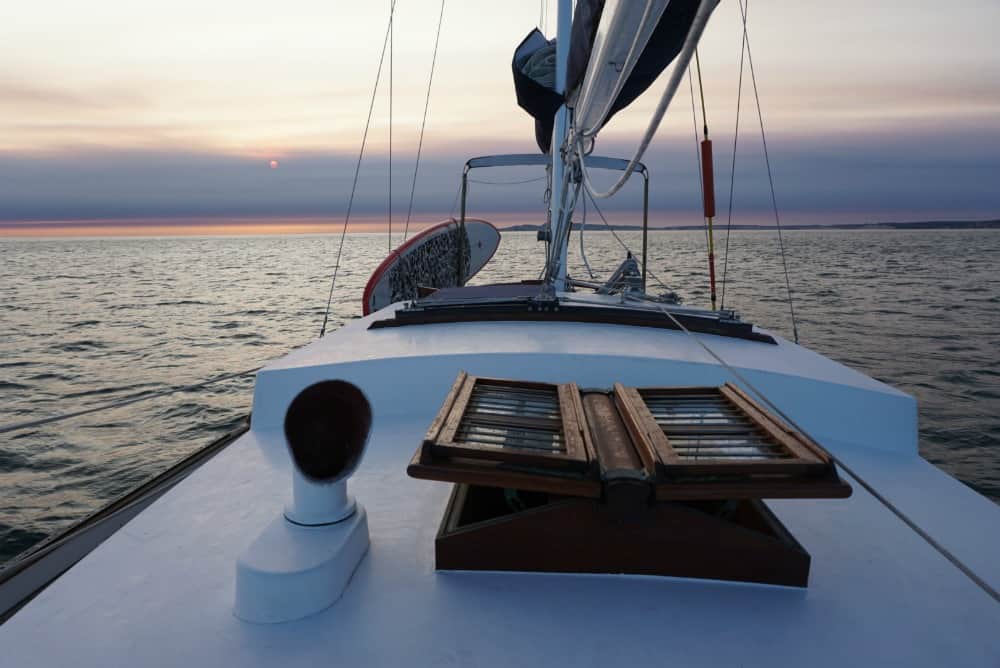 Once again, it was my turn to be on anchor watch until midnight. The wind had died down and the boat was parallel to the shore. We faced a four-foot drop in tides, so Tom was worried the boat could swing around the hook and end up in shallow water. It was my job to check the depth sounder every half hour to make sure we didn’t run aground. Not the most relaxing thing ever.

Around 9 pm., I brought out blankets and a pillow and made a little bed on the stern. I looked up at the spattering of stars overhead, the way the white anchor light carved a little circle in the sky as the boat swayed and rocked. The Milky Way streaked a trail of white across the sky, and I felt we were somewhere truly remote and rugged. The high-pitched yips of coyotes filled the air, and I heard an animal take a deep breath from somewhere near the boat. A sea lion, maybe, trying to find a place to sleep for the night.

I watched the depth sounder tick from 25 feet down to 18, and by 11 pm, Tom came out onto the deck. The shore break sounded louder than ever, so he decided to pull up anchor and move us out to 35 feet of water. Around 11:30 pm, we were situated again, and I went down to the stateroom to try to sleep while Tom spent the night on deck, checking the depth sounder every 90 minutes. 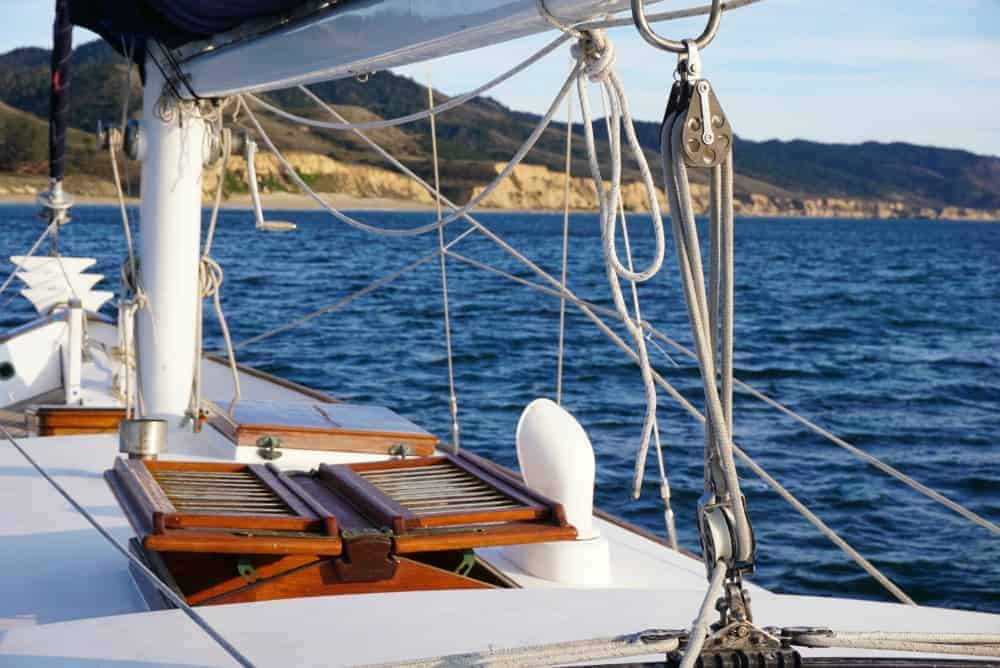 The next morning, we got up at first light and started heading back to San Francisco. We both felt bleary-eyed and exhausted, but were also happy by the way the anchor dug in and held. So far, the bluewater cruiser was doing a great job on her first off-shore trip, and I felt happy that she was the one keeping us safe.

Our trip back south was uneventful until we hit a section of the ocean dubbed “the potato patch.” Depths are very shallow there, which causes the swell to steepen and move quickly. One huge swell off our stern sent us back down so fast the boat heaved, and I wedged my boots against the bulwarks to stay in position. Tom wanted to get out of there, and fast, so he pulled in the main and turned on the engine in case we had to do a quick turn and ride up the swell head on.

Luckily, we steered out of the large swells and headed back toward the Golden Gate Channel, with everyone intact and happy.

I love this boat, the way she handles and moves while ocean sailing. It reminds me a little bit of riding a horse. The jib sheets are the reins, the swell is the canter. The boat pulls at the reins like a horse would, eager, excited. She becomes a living creature when we’re out there, dancing in the waves, playing with the wind. I feel the boat is truly in her element, in the wild wilderness of the sea. 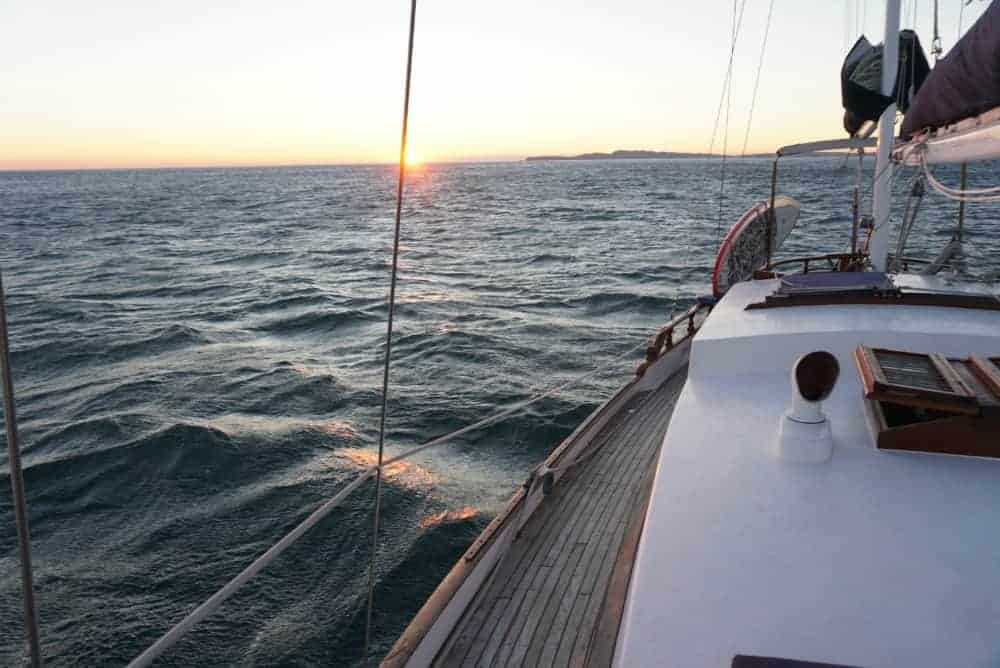 When we rolled past the Golden Gate Bridge, we headed toward Sausalito to anchor for the night. Oh, how peaceful it felt in the protected Richardson Bay. San Francisco lit up like a Christmas tree in the distance, all strands of white lights, with green and red tips on the tops of the buildings. The twinkling hills of Sausalito rose on our port side. It was one of the most beautiful spots in the San Francisco Bay area, and we got to stay there for free.

We both slept well that night, thankful to be somewhere safe. No anchor watches, no hazards, no shore break or wind or current. Just us the boat and a good hot toddy, and an uninterrupted night’s sleep.

It’s amazing how much I feel thankful for after experiencing a couple days at sea. It’s similar to how I felt after a few days of backpacking in the rugged Sierra Nevada. I felt thankful for a hot shower and a bed, a meal, a beer. Small things that were once insignificant are now huge, and I will never take them for granted.

Being on the sailboat is experiencing a different type of nature. It reminds me just how small we are, and how powerful the earth is. The wind, the sea, the crashing waves, the forests all deserve our respect and admiration.

I can’t wait to get back out there.

Success! Now check your email to download 7 recipes for a sailboat galley!

We participate in the Amazon Services, LLC Associates program. As an Amazon Associate, we earn from qualifying purchases.
160shares