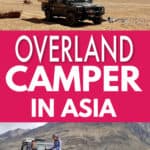 It’s hard to watch any of Leigh and Steph’s YouTube videos without walking away with a sense of wonder. The dramatic backdrops, the winding dirt roads, the river crossings in remote Central Asia.

The couple has been traversing these daunting roads in their overland truck camper for two years now. These are wild, desolate locations where you might not see another overland vehicle for days.

Leigh and Steph stop to rock climb in otherworldly valleys, and to experience culture in countries like Tajikistan, Afghanistan and Kyrgyzstan.

They do it all with their Land Rover Defender and a Four Wheel pop-up truck camper.

“We just got back from 2,000 kilometers of some of the worst roads we’ve ever seen in Afghanistan and Tajikistan,” said Leigh. “Even a major highway in Uzbekistan was horrible. The road was just sections of tarmac and you could never go over 15-20 kph. Sometimes, you couldn’t even see because of blowing dust.”

Their adventure in the overland truck camper is incredible to watch, with their YouTube Channel transporting you to distant lands you might never imagine or think about.

So who are Leigh and Steph? What is overlanding? We chatted on the phone when the couple just finished their tour of Afghanistan.

How Leigh and Steph started in their overland truck camper

Growing up in Australia, Leigh has always been into nature, adventure and the outdoors. He grew up on a small farm and often went camping in a 4×4 overland camper.

Leigh had already driven an overland camper trailer across Australia several times before he met Steph on a rock-climbing trip in Thailand.

She’s from Paris and had never rock climbed or overlanded before. But all that was about to change.

“After we met, I went to visit her in France, and then she made the decision to move to Australia on a working holiday visa,” said Leigh. “She got into rock climbing and became passionate about it as well. We share that along with a love of traveling and seeing the world.”

The two have now been overlanding and traveling for 10 years, with the last two years full-time in the overland truck camper.

They used to tow an overland camper trailer for years in Australia, but that didn’t work as well on narrow, crowded European streets. That’s why Leigh and Steph went to a Four Wheel truck camper.

They decided on a Four Wheel truck camper because it’s a capable, lightweight truck camper that can handle bumpy terrain.

The only dealer is in Germany, so they drove the Land Rover Defender to pick up their brand new tiny home.

When most people think about Afghanistan, they imagine snow-capped mountains, deep caves and the Taliban. But there’s so much more about this rugged Central Asian country.

Before Leigh and Steph took their overland camper into the country, they did plenty of research first.

“We planned this for a long time,” said Leigh. “You can’t just travel freely in Afghanistan. There are areas that aren’t safe. We traveled in northeast Afghanistan, in the Whakan corridor. It’s untouched by any of the fighting or conflicts with the Taliban.”

You can’t just travel freely in Afghanistan. You have to plan it out.

This region gets about 100 tourists per year, and Leigh and Steph said the landscape was stunning and the people friendly.

Roads in Afghanistan are extra rugged, so the couple left their truck camper in Tajikistan. For two weeks, they slept in a tent, then went with a horseman over to a remote village. There, they visited nomadic tribes who live at 4,000 meters up in the mountains. It was a remote and desolate place, a very isolated region.

“The people live traditionally off the land, living in yurts with yak herds,” said Leigh. “They mostly survive on yak meat and yak milk. We had a personal feeling that we shouldn’t have been there, that we were intruding on an ancient way of life.”

Why they chose a truck camper for overlanding

Leigh has always been a firm believer that the sleeping quarters should be separate from the vehicle when overlanding. This is why he’d never travel in a campervan or an RV.

As rock climbers, it’s important for Leigh and Steph to leave their truck camper behind and take the Land Rover to distant locations. That way, they don’t have to set up and break down camp whenever they want to head out on an adventure.

“The Four Wheel truck camper is really easy to take on and off,” said Leigh. “We can do it in about 30 minutes. And, we can sleep in it when it’s off the Land Rover! It lowers right down onto legs. It’s engineered to be completely righted even not being on a truck.”

For example, the couple parked their overland truck camper in a campground in Turkey, then drove the Land Rover Defender a famous rock climbing area for the day. Every evening, they returned to their tiny home.

“It pops up completely, so I can walk around without having to stoop or bend my knees,” said Leigh. “We have a kitchen, a living space, a fridge and an outside door. We have tons of space in this thing and plenty of room for our rock climbing equipment. We can’t think of a reason to go bigger.”

Another big draw of the Four Wheel overland truck camper is that it can fit into a standard shipping container. This will bode well for when Leigh and Steph explore the United States.

The weirdest part about overlanding in Central Asia

While most of their experiences in the overland truck camper have been positive, Leigh and Steph have noticed something interesting about the culture in Central Asia.

“We’re traveling through countries where having children is a huge priority,” said Leigh. “We are married without kids and its been a huge thing for us to deal with. As soon as you meet locals they ask if you’re married and have children.”

One time, Leigh and Steph stopped in a tiny farming community in Uzbekistan when things really got out of hand. The villagers wanted to take Steph up to a special place in the mountains where there’s holy water that promotes fertility.

“They were adamant that Steph go with them up to this springs and drink fertility water,” said Leigh. “We had to tell a white lie that our visas were expiring and we had to make it across the border. It was funny and stressful at the same time.”

He said it’s even worse for unmarried couples who also don’t have children, and is an interesting cultural difference to be aware of when traversing Central Asia.

What’s next for Leigh and Steph and their overland truck camper?

When overlanding across Central Asia, or even anywhere, it’s important to be flexible. Leigh and Steph are used to changing plans at the drop of a hat, or even expecting delays.

For example, they wanted to drive through Iran, but recently changed their minds based on the political climate in that country.

“You have to be up to date,” said Leigh. “There are so many social media platforms you can use to do this. A lot of people are against social media, but it can be used in a positive way and is a great tool for overlanders like us.”

He said you can spend hours on the internet researching foreign affairs websites, or you can just hop into an overlanding Facebook group and ask and people respond with up-to-date information.

Now that the couple isn’t heading to Iran, they are heading north into Mongolia, then will transit Siberia to put the overland truck camper on a ferry to South Korea. They’ll spend the winter in South Korea, then see what happens next.

If you want to follow along with their amazing overland adventures, check them out below: