The Toyota Hiace is a unique, charming little van with a vintage look. Launched in Japan in 1967, it has been one of the most-sold models by Toyota. It’s been nicknamed differently across the world, so some people know it as “Commuter” or “Quantum”.

Today the Hiace is still very popular in Asia, Africa and Australia. Here, it’s mostly used as a minivan or a work van; although it has also been manufactured with a camper interior and a pop-top.

The Hiace makes for an excellent adventure van, as it’s available in forward drive and it’s quite narrow and short. You’ll be able to get to many wild remote places on it.

In this article, we look at 8 cool Toyota Hiace camper builds. If you’re planning to buy a Hiace or a similar short and narrow van, these builds will offer you plenty of inspiration and smart room-maximizing ideas.

Check out campervan rentals by owner on Outdoorsy! These van rentals are a great way to test out a van before you buy. Test out Sprinters, Ford Transits, vintage VW and Dodge Promasters. All types of cool vans are on here. Use the coupon code WAYWARDHOME to get $50 off any van rental with Outdoorsy. 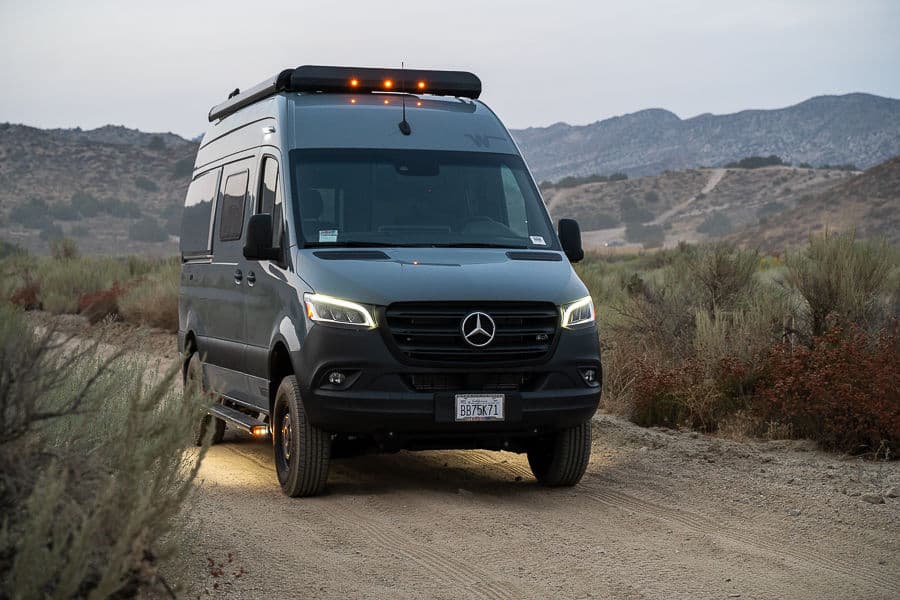 Is the Toyota Hiace available in the U.S.?

First, let’s answer this crucial question many aspiring Hiace owners ask. The Toyota Hiace has never been produced in the U.S., as it doesn’t fit the local requirements for safety crash testing.

However, some vans have been imported into the country through the years. This is why you will find used Toyota Hiaces for sale every now and then. It’s not easy to get your hands on one, but if you dig deep and are OK traveling across states to go see them, you will be rewarded.

If you’re not ready to buy a van yet and you’re quite set on getting a Hiace, you might want to hold off a little longer. There are rumors that Toyota will bring the minibus to the U.S. soon – possibly as early as 2022. Perspective buyers, keep an eye on the market news.

Pros and Cons of a Toyota Hiace camper

Before we start looking at some Hiace conversions, let’s talk about the advantages and disadvantages of using this particular vehicle as a camper van.

Ready to be inspired? Have a look at these Hiace conversions. Some were done DIY, while others were carried out professionally. They all include lots of clever ways to make the most out of the limited space offered by the vehicle.

Chris bought an old Toyota Hiace panel van and converted it into a camper with a buddy in just 4 days, which is rather impressive. The guys installed insulation in the body and covered it with plywood panels. Then, they attached laminate vinyl to the ceiling and floor.

Next, they created a platform bed with lots of wooden storage boxes underneath it and built cupboards, a chest of drawers and cabinets. Everything was built from scratch, so it fits perfectly in the van. Finally, the guys fitted solar panels on the roof.

One of our favorite features of this conversion is the hidden, slide-out desk. This pivots on top of the chest of drawers, so Chris can use it to work or eat on while sitting down.

2) An off-road office on wheels

Nate and Shannon imported a four-wheel drive 1995 Toyota Hiace from Japan to try out the van life. The couple says it was cheaper to import it than to buy a 4×4 in the US.

Although the vehicle was already set up as a camper, they decided to upgrade the interior to make it suit their lifestyle. This took them nearly a year to complete, as they did it in their spare time.

The white exterior looks very 80s. Inside, behind the passenger’s seat, there’s a storage box lined with a cushion, which also serves as a composting toilet and a seat. Near it, there’s a mini kitchenette with a small sink, fridge/freezer and a three-burner gas stove with an oven. At the back, there’s a decent-size bed and an office space. At the foot of the bed, they built a bench and installed a swivel table, where Nate and Shannon can work on their laptops. We love how they tried to make such a small van feel like home.

This Cruising Cabin Toyota Hiace was converted professionally into a true overland vehicle. The exterior features cross bars, a front cargo basket, and a snorkel, so you can get cleaner air into the engine. A side-mounted ladder leads to the roof, where three solar panels are mounted.

Inside, there’s a three-seater at the front, so it seats a total of 7 people. Behind it, there’s a kitchenette with a fridge, hob and sink on one side. On the other, there are some storage boxes.

In the rear, there are two passenger seat benches, which turn into a dinette with a removable table as well as into a bed. The vehicle also came with a pop-top roof, so there are two beds in total. Finally, this Hiace has been fitted with a diesel heater, so you can keep road tripping in the winter. If you want to be able to go anywhere on your small van, we recommend looking at this conversion carefully.

Charlene converted her old Toyota Hiace, together with her dad, from scratch. The interior is completely lined with white wooden slats, which make it look bright and modern. A hatch in the roof allows even more light to get in.

Behind the front seats, they built a platform bed, which allows Charlene to store lots of gear underneath. In the back, the pair built and fitted a kitchen work surface with cupboards underneath. There is a lot of space in front of it, so Charlene can comfortably cook in front of it. Everything in the van looks modern and cozy.

5) A Hiace camper with an office and lounge

Marcel and Vendula bought a 1994 Toyota Hiace Commuter and converted it into a camper to tour Australia. Their build is unique because it features a dinette with a table in the back and an L-shaped kitchen.

As Marcel is very tall, the couple designed much of the furniture so he can use it while standing outside. The sink is right in front of a window, so he can wash the dishes while standing next to the van. They also fitted a small pull-up table next to the gas burner, so he can prep food and cook without stooping inside.

At the rear, they built a kitchenette with two benches and a table, which fold away to create a bed. They use this area to work, eat, and lounge. In lounge mode, the couple puts the table away and chills out on the benches. All storage underneath the bed is accessible from the top, as well as the sides. When you open the hatchback, you can also access their emergency chemical toilet, which is stored under the bed.

6) A DIY camper van conversion with a stargazing sunroof

Madelaine and Caleb bought a 1993 Toyota Hiace Supercustom, which came with a camper interior when it was originally imported from Japan. The couple modified some of the interior features to suit their needs. They can move between the front and back of the vehicle by squeezing between the front seats, which is very handy while on the road.

The couple built a kitchen unit with a deep sink and automatic water pump. Next to it, there’s a chest in which they keep a top-load fridge. At the rear, there’s a platform bed with storage along one side. Above it, the guys installed nets to provide extra storage room.

Madelaine and Caleb love sunroofs, so they fitted two in the van. One is over the bed and features slide-out covers, so they can watch the stars at night and then close it off when they go to sleep.

Ryan rented this cool Toyota Hiace to go on a 4-day road trip on the Sunshine Coast, in Australia. Before taking it back, he took a video of the layout so he could offer some inspiration to those who want to get started with their own build.

What makes this conversion stand out is the slide-out kitchen, which comes out of the left-hand side of the vehicle. This has been custom-built completely and features a mini sink made out of a bowl and a single-burner camping stove. This cool unit allows you to cook outdoors. On its right, there’s a fixed fridge.

At the back of the van, there’s a platform double bed with drawers underneath. Next to it, there’s a little movable ottoman, which acts as a seat. At the rear of the vehicle, there’s a pull-out table, which you can use to make coffee or work. We love how many clever features were installed in this van.

Shannon and Kyle self-converted their Hiace into a tiny home to travel around Australia.

On the roof, they mounted solar panels and a side awning, which provides them with shade and weather protection outside.

Inside, behind the front seats, they installed an L-shaped kitchen with a sink and fridge. To maximize space, they built a platform bed that occupies all remaining space of the van. However, the portion of it next to the kitchen converts into a mini dinette, where they can eat or work.

The guys wanted to make the van feel like home, so they fitted shelves, hangers, a mini cork board and more. The result is a snug home on wheels with lots of storage.

Are you in love with the Toyota Hiace after seeing these incredible builds? Start looking for a used Toyota Hiace camper van for sale in the U.S. or wait to see if production will start soon. If you have the budget, you can even think of hiring an importer to bring a vehicle into the country.

Don’t have the time required to get your hands on one of these cuties? Check out these 5 amazing Honda Element camper conversions. The Honda Element is nimble, has off-road capabilities, and features a roomy interior for sleeping in. It’s the perfect alternative to the Hiace.

Other Articles to read:

I spent my childhood holidays exploring Europe on my parents’ motorhome. Now, I live, work and travel on a sailboat with my husband Ryan. If you like, you can follow us on our YouTube channel, where we’re documenting refitting and cruising on our Tayana 37.