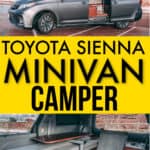 Living the van life can be exciting and captivating, but not everyone has the cash to buy a new campervan right off the lot. Fortunately, you can get creative and build a camper van out of an existing car. Or, in this case, a Toyota Sienna camper.

The Toyota Sienna is a reliable minivan that makes an excellent shell to create a small campervan. Toyota Sienna campers are fun to use and enable you to travel the country in style without high upfront costs and maintenance. In fact, some people have built a Toyota Sienna camper for just a few hundred bucks!

If you’re interested in making your own DIY campervan, you’ve come to the right place. Today, we’re going to show you how to convert a Toyota Sienna for your next van life adventure!

Why a Toyota Sienna Camper Conversion?

There are a few reasons to go with a Toyota Sienna camper instead of buying a brand-new camper van, including:

So, now that you know the reasons to convert a Toyota Sienna camper, let’s see how to do it!

Sometimes, the best way to learn how to do something is to see what other people have done. There is a large Toyota Sienna camper community online, meaning that it’s easy to discover new ideas and tricks on how to pimp your ride. Here are some of the top models we found on YouTube and Instagram.

This father-daughter duo built a Toyota Sienna camper together using standard power tools, lumber, and other accessories. This particular camper comes with:

Overall, this build only cost about $3,000, which is far less than anyone would pay for a new or used camper van. You can even borrow Jack’s design if you feel inspired to follow his lead.

Since Jason is a metalworker by day, it makes sense that his Toyota Sienna camper would be fully-loaded. He posts videos about the build regularly, and so far, it looks legit. Some highlights from this conversion include:

When looking at the various amenities, it’s hard to believe that this Toyota Sienna camper conversion wasn’t professionally-made. We’re getting jealous just looking at it, and it makes us want to start building right now!

Here we have another Toyota Sienna camper conversion that seems like the real deal. Bruce has taken great care and attention to detail to include all of the standard amenities, including a sink, convertible bed, overhead storage, LED lighting, and a roof storage rack.

What makes Bruce’s rig notable is that each piece is built to be modular, meaning that he can take them out and use the Sienna as a passenger van if necessary.

This setup also means that he can potentially swap new pieces more easily, either for upgrades or to replace damaged parts.

As with Jason, these Toyota Sienna camper builders have a leg up on most camper enthusiasts because they are expert craftsmen by day.

The folks at Pacific Cre built a custom Toyota Sienna camper van for a client of theirs, complete with a pull-out sink, refrigerator, cooler, and bed platform with a campervan mattress.

This Toyota Sienna conversion is one of the simplest, but that’s part of the appeal. You can add as many flourishes as you want, or you can go the minimalist route instead.

Last but certainly not least is this Toyota Sienna custom conversion from RenkLife. This build was extra-special because it was a commissioned project with a few guidelines.

RenkLife accommodated all of these requests and built a converted Toyota Sienna camper in just three days for a few hundred bucks. The results were stunning, and there are plenty of features and amenities, including a portable toilet with a privacy screen.

Adding any kind of plumbing to a camper conversion is challenging, particularly on such a tight budget. However, a toilet is an excellent addition for any hardcore RVer.

While the DIY route is perfect for those with the tools and know-how, there is a significant learning curve if you don’t fall into that category. Fortunately, there is an easier alternative for creating your own Toyota Sienna camper – conversion kits!

These kits provide everything you need to take a standard Sienna and turn it into a campervan that will become the envy of all of your friends and family. Best of all, they only take minutes to install and are removable for maximum versatility.

Here are our top conversion kit companies you can contact to get started:

Modular elements are typical for camper conversions because they allow you to customize your rig to suit your needs. The Nestbox from Egoe comes in three sizes: compact, medium, and large.

You can pick the equipment for your Toyota Sienna camper, including a cooker, refrigerator, mattress, collapsible sink, and storage.

If you want even more choices, Freeway Camper has you covered. You can choose from various conversion kits for a Toyota Sienna camper, including those designed for up to four people. In that case, you get a pop-up tent for the roof so that you can accommodate as many sleepers as possible.

For those who are a bit extra, the Sleeping Giant is a deluxe kit that works well for a Toyota Sienna camper conversion.

This kit comes with a power supply, built-in sink, folding countertops, camping stove, refrigerator, and folding mattress for two people. Best of all, it has a built-in slide-out feature for easier use.

RoadLoft only comes with one conversion kit, but it’s a doozy. You can buy either the two or four-person model, and you get a convertible bed, a bench with a pop-up table, a slide-out kitchen with stove and fridge, and tons of storage space.

This kit is another modular design, so you get to pick and choose which elements to buy and install. You can even buy them all and adjust your Toyota Sienna camper layout for each trip.

There are a couple of companies out there working on custom Toyota Sienna campers. These are more expensive than doing a DIY minivan camper, but they’re sleek and ready-to-use.

Although all-in-one conversion kits are simple and easy to use, they are relatively limited. If you want the ultimate Toyota Sienna camper without having to put blood, sweat, and tears into the build, you can get a customized conversion from Oasis.

Oasis Campervans has been doing custom Toyota Sienna camper conversions for years, and they’ve gotten really good at expediting the build process. Best of all, these jobs are much less than a new van, and you get to dictate how your new rig will look and feel. Oasis can install all kinds of equipment, including:

Get the camper van of your dreams without having to spend hours in a workshop sweating over every detail. Best of all, these projects only take a few days, so you can be on the road in no time.

Contravans campervan conversion company works on Toyota Siennas between the years 2004-2020. Due to design changes, the company is not offering conversions on 2021 and newer models.

Here’s a bit of what’s included in a Toyota Sienna camper van by Contravans:

You can also choose from a variety of options, like awnings, bike racks, an electrical system, a fridge on a slide-out and roof racks.

Pros and Cons of a Toyota Sienna Camper

Technically speaking, almost any minivan can be converted into a campervan, so what’s so special about the Toyota Sienna? Here are a few juicy benefits that you get with this specific vehicle:

While the Sienna does have some tangible benefits, it also has a couple of downsides, including:

Traveling in a Toyota Sienna camper van is lots of fun, particularly if you have all the right amenities. While a camper conversion doesn’t come with every modern luxury (i.e., a shower and toilet), it enables you to get out and explore without spending money on hotel rooms or camping equipment.

Now that you know how to convert your Sienna, we’ll see you on the road!