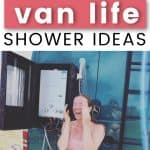 Figuring out where to shower when you live in small space like a campervan can be tricky.

We’re in a Chevy Astro van, which has no room for a portable toilet or a van life shower. What we usually end up doing is using a solar shower every day. Or, if we’re lucky, a nice campground shower.

If you’re looking for van shower ideas for showering on the road, go no further.

We’ve rounded up the top ways to add a van shower to your rig, whether it’s a solar shower, an indoor shower, an awning shower, or a makeshift shower made out of a weed sprayer.

Living in a van doesn’t mean you have to be dirty. We hope these van life shower ideas give you lots of food for thought for your DIY campervan build.

💡 Need help DIYing your campervan? Check out the Sprinter RV Conversion Sourcebook, which can be applied to any van build. You’ll find 378-pages of diagrams, photos and how-tos to build your best van!

We’ve gone through at least three iterations of solar showers, and to be honest, many of them suck.

However, we absolutely love the Sea to Summit pocket solar shower, which folds down into the size of a deck of cards when not in use.

We hang this van life shower from our back hatch or the front mirror to use as a handwashing station.

It’s 10-liters, which is more than enough for a shower for two people. It heats up quickly in direct sunlight, and we often rest it on the hood of our van, loosely connected to the wiper blades.

Our other solar showers seemed to rip and leak. This is the best van life solar shower we’ve found.

This is the van shower we use in our Chevy Astro campervan. It’s portable, heats up well in the sun, and is great as a hand-washing station, too.

You’ve probably seen those campervans driving around with a long, black PVC-type pipe along the edge of the roof.

You can see how the below Jeep Camper is using an awning shower below:

This van life shower is a pressurized awning shower, which is either DIY or purchased from a company like Yakima.

The Yakima Road Shower is easy to fill and includes a garden hose adaptor.

All you have to do is park your campervan in the sun and wait for the van shower to heat up. It even comes with a stick-on thermometer so you can tell how hot the water is.

If you don’t want to spend the money, you may want to consider building a DIY version of this van life shower. You can see an REI tutorial here.

This awning shower attaches to the side of your van for showering on the road. It’s solar-heated, with pressurized water and a thermometer. Choose between a 4, 7 and 10-gallon van life shower.

If you don’t want to stand around and wait for the sun to heat up your van life shower, you may want to consider one that uses batteries.

A van shower like the Ivation Portable Outdoor Shower pumps water from a bucket into a nice, steady stream.

This shower comes with a rechargeable, lithium battery. You can charge it with your car’s cigarette lighter, using a solar generator or with a wall charger.

A 2-5 hour charge lasts for 60 minutes of use. It also comes with a suction-cup holder for hands-free use.

The Ivation battery-powered shower is a convenient van life shower. The rechargeable lithium battery is good for 60-minutes of shower time after a 2-5 hour charge.

We were discussing van life showers over in The Wayward Home’s Facebook group when one of my readers brought up a DIY bug sprayer shower.

I’d never heard of this, and was blown away by the idea.

Here’s what my reader wrote, “We use a 2-gallon bug sprayer we got at Home Depot for our van shower. We buy the blue metal one and it heats up in the sun quickly.”

The couple sets the bug sprayer van life shower on the back hatch of their Sprinter van camper, where they use it for showering on the road.

Some people elect to put their own shower hose and an actual shower wand on their weed/bug sprayer shower. You can see what one couple did here.

Some people elect to build a van life shower from a bug or weed sprayer canister. You can even add your own shower hose, shower wand and low-flow showerhead. This is a great affordable van shower option.

This expensive but efficient Geyster System van life shower uses less than 1 gallon of water for 15 minutes of usage. For a hot shower on the road, all you have to do is add 2 liters of cold water and 2 liter of boiling water. Then, you have an instant van shower!

An LED dashboard tells you the water temperature, and a water level sensor tells you when it’s time to stop scrub-a-dubbin’.

Charge this small and efficient van life shower with a 12-volt outlet – either your cigarette lighter or a portable power station like the Jackery 500.

You can also easily use this van shower to wash your dishes – it comes with a replaceable scrub sponge. It seems like a pretty cool van life shower I’d love to try out one day.

The Geyster Portable Shower is a compact, efficient van shower that is easy to fit inside your rig. Use it for showering, washing your dog or washing dishes.

Do you feel like you need a van life shower inside your campervan? Having an indoor shower is a big personal preference and I’ve seen arguments go both ways.

Kristen Borr of Bearfoot Theory had a wet bath with a shower inside her first Sprinter van conversion, but now says she wouldn’t do it again.

On the other side, Zach of Van Life Outfitters put a DIY wet bath in his Dodge Promaster campervan.

He said having a private cassette toilet and shower was an absolute necessity.

There’s a mixed camp when it comes to adding a shower inside your campervan. This is an entirely personal preference and you’ll have to weigh the pros and cons. You’ll also need a large van for the room for an interior shower.

If you want a van life shower on demand, you may want to consider installing a tankless water heater in your campervan.

Propane is the logical choice here because heating up water using electricity takes tons of energy. You’d need to be plugged into a campground or have a huge battery bank connected to solar panels.

For those reasons, most van lifers go with propane.

You always need to install a tankless propane water heater outside your campervan for safety. The water heater needs to be attached to both a bottle of propane and a bucket of water to work.

The flow rate is lower than a typical shower, but when you’re living the van life, any time of shower feels awesome, right?

A tankless water heater is a popular option for a hot van life shower. You will have to mount this Camplux tankless heater outside your van and carry around a propane tank and container for water.

If you don’t want to deal with any sort of van life shower, you can rely on public showers.

We’ve done this quite a bit when we didn’t want to set up our solar shower.

Here are some places you can find public showers for showering on the road:

Another method van lifers use to stay clean on the road is using wet wipes and dry shampoo.

This really works in a pinch if you can’t take a shower on the road.

We always try to keep these in our van for emergencies. Here are my favorite brands of wet wipes and dry shampoo:

For an awesome van life shower, you’ll also need a really good towel that dries quickly and folds down tiny.

We used to use microfiber towels, but I hated the way they felt, and they never seemed to work very well.

I discovered something called a Turkish towel when reading some sailing blogs. The Turkish towel is made out of 100% cotton and dries as fast as a microfiber towel.

However, it feels much better on the skin and dries you off faster.

You can also use a Turkish towel for picnics, sitting on the beach, or as a lightweight lap blanket.

This is the exact Turkish towel we use both inside our van and on our sailboat. We have one each, and love how quickly it dries.

It also folds down really small as it’s made out of such lightweight material. I will NEVER go back to microfiber!

Looking for more shower inspiration? Check out this post on off grid shower ideas!

Want to learn even more about Van Life? Here are our favorite articles: