You are here: Home / Van Life / 8 incredible minivan campers you have to see 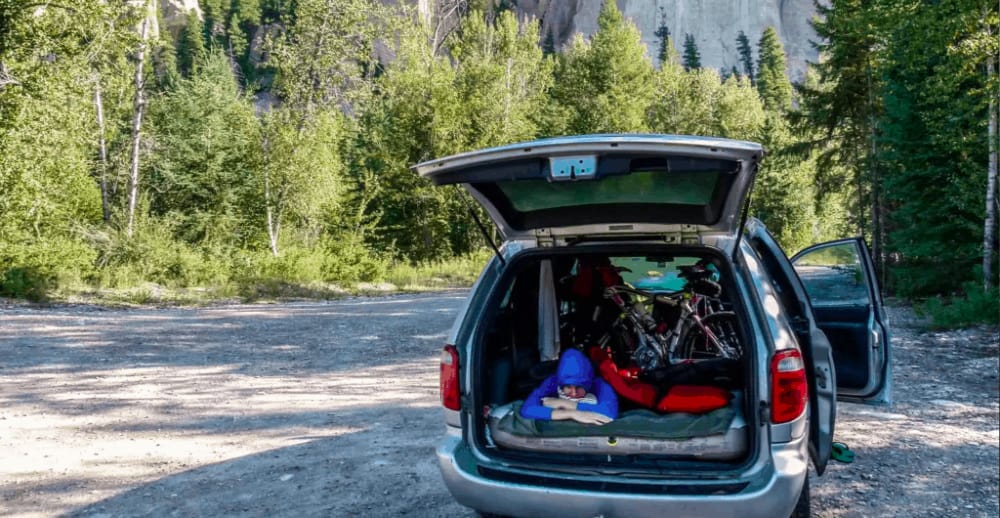 *This post may contain affiliate links, which means I may earn a small commission at no extra cost to you. Please read our disclosure policy for more info.
659shares 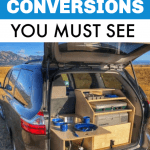 A minivan camper makes for the perfect stealth camping vehicle: spacious enough to fit a decent size bed, and so inconspicuous, no one will suspect someone is sleeping in it.

Minivans drive like cars and don’t require a special license, but they have the perk of having lots of space in the back.

By either folding the passenger seats or removing them, you can create a decent space to sleep, relax and cook.

They’re one of the cheapest campervans you can get and they’re also very fuel-efficient, so these are some of the best vans to live in for aspiring van lifers on a budget.

Some people go all out and transform their minivan into a full camper with a bed, sofa, kitchen, table and portable toilet.

Others choose to keep things simple and live a more purist camping life. There are pros and cons to both approaches, but which one you choose depends on your needs.

Can you really use a minivan like a tent? Or would you rather cook on a decent kitchenette?

The most popular models for minivan camper conversions are the Toyota Sienna, the Chevy Astro Van, the Dodge Grand Caravan, the Kia Sedona and the Honda Odyssey.

Ready to get inspired?

Check out these incredible minivan campers. We chose some of the coolest rigs out there, so you can start planning your own conversion, or daydream about living the van life on the cheap.

Amanda is from Sweden and has been traveling full-time since 2018.  Last year, she moved to Canada with her boyfriend on a working holiday visa.

To explore the country, they bought a 2004 Dodge Grand Caravan and converted it into a DIY minivan camper.

They removed all the passenger seats at the back of the van and built the campervan interior from scratch. The couple installed a double bed with storage underneath and shelves on both sides. The bed turns into a couch.

In front of the bench, they can hang a table platform by tying ropes to the coat hooks placed around the van. This is where they eat their meals and work.

Next to the couch, there’s a small kitchen with a sink, running water and a gas stove. The tap is electric and it charges off USB while they drive around.

They also installed a slide-out kitchen counter that extends outside of the vehicle, so they can cook outside and prevent steaming up the van. Between the driver and passenger seats, they placed a cooler that charges off the engine’s battery.

Find out more about the minivan camper conversion on Amanda’s blog.

Interested in the van life, but not sure it’s for you? Consider renting a camper van and giving van life a test drive.

Glenn used to own an iconic VW camper, and absolutely loved it, but the cute old van kept breaking down. Frustrated, he sold the VW camper and bought a Toyota Sienna to convert into a camper.

He did everything DIY for only $200. He took the completed Sienna minivan camper on a 12,000-mile road trip around the USA with his partner Francesca and their dog Pi.

At the back of the vehicle, there’s a double campervan bed that converts into a couch. In the middle, there’s a narrow table for eating meals or working on a laptop.

On the left-hand side of the minivan camper conversion, there are various shelves to keep kitchen utensils, fruit, and more. There’s also a big storage space under the bed, where Glenn keeps his clothes and cooking equipment.

He even added a front porch by installing a tarp which is held up by two bamboo sticks.

You can see more pictures of Glenn’s minivan camper on his blog.

This is a custom conversion by Colorado-based company Oasis Campervans. They transformed the Toyota Sienna XLE and the LE into adorable campers.

The minivan camper build features a dinette, which turns into a double bed, and a kitchen with a sink, a countertop, a fold-out table and storage.

The kitchen is at the back of the van for outdoor cooking. In it, there’s space to add a cooker and a cooler.

The design blends a modern camper with rustic colors. The full conversion costs $8,500.

Check out our detailed review of a Toyota Sienna minivan conversion.

Lisa moved to Canada from Germany to work and travel solo. Having decided to live in Vancouver – one of the country’s most costly cities – she chose to convert a minivan into a camper, rather than paying for expensive rent to live in an apartment.

Lisa went for a 1997 Chevy Astro Van – one of our favourite mini rigs.

At the rear of the minivan camper conversion, there’s a comfortable single bed, which also turns into a sofa or a double bed, thanks to a slider. Under it, there’s a slide-out drawer that offers lots of storage.

In the middle section of the vehicle, she installed a very simple but cute kitchen with a sink, water filter and foot pump. She also added a flip-up piece of ply to add to the kitchen counter space. In the cold Canadian winters, she uses a propane heater to stay warm.

Lisa’s minivan camper is full of clever storage ideas, such as the hanging hammock above the bed. What makes it extra cozy is the lovely soft furniture and blankets she decorated the interior with.

If you are looking for something small to tow, instead of a live-in vehicle, check out these adorable micro campers!

Maya and Michael were born in Slovakia, where they caught the travel bug. They’ve road-tripped thousands of miles in the USA and Canada in their minivan camper, a Dodge Grand Caravan.

When they moved to New Zealand, they bought the same vehicle (a Chrysler Grand Voyager) to keep living the van life there.

Maya’s and Michel’s minivan camper conversion is amazingly simple. They installed a platform bed at the back of the van, under which there’s lots of storage.

They cook on their camping stove and store their bikes either inside the van or on a roof rack.

This simple minivan camper conversion gives them the freedom to travel and cook anywhere. They don’t need many comforts inside, because they’re all about living outdoors and practicing lots of sports.

Find out more about the conversion on Maya’s and Michael’s blog.

Denver-based company Contravans convert Toyota Siennas and Chrysler Pacificas minivans into campers. Their builds typically include a bench that turns into a double bed and a rear kitchen with sink, storage and space for a stove and a cooler.

There are three minivan camper models available – base, standard and deluxe – and prices start from $3,498.

The minivan camper conversion company also sells various accessories, such as rooftop tents, refrigerators, awnings and bike racks. Depending on the model you choose, your minivan can have seating for up to five people.

Read up more about Contravans conversions on their website. They also convert cargo vans, SUVs and cars into RVs.

ForestyForest is a solo van lifer who travels the US and Canada aboard his minivan camper.

He started off by converting his Chevrolet Uplander DIY with a completely removable custom build. Then, he decided to go all out and install new equipment permanently.

Being a solo traveler and not being exceptionally tall, ForestyForest managed to get a lot out of the space available in his minivan camper.

Inside, he built various shelves, a single bed, and a table that serves as a kitchen, as well as a desk and dining table. He’s added a diesel heater and a cooler.

The whole minivan camper is closed off  by a wall and the passenger seat has been removed, so there’s also enough space to store a bike inside the minivan.

You can find out more about ForestyForest on his YouTube channel.

Do you prefer a minimalistic, modern look? Then you may want to consider buying a Freeway minivan camper kit.

The company is based in Canada, but ships to the US, too. Their designs are practical and sleek, and their build robust. There are five minivan camper models to choose from and prices start from $1,099.99.

Everything on board is easy to assemble, so you can swap the dinette for a double bed easily and quickly. There’s tons of storage and thanks to the numerous holes in the components, locating your adventure gear and camping equipment is painless.

You can choose from an array of gear and add-ons, including rooftop tents and solar generators. You could get yourself a luxurious minivan camper kit for just under $5,000, including shipping.

Their kit can convert most minivans to a camper – from Honda Odysseys to Hyundai Entourages. Find out more on their website.

Looking for a van, but maybe not so mini? Check out these great places to buy a Sprinter Van camper.

Whether you’re planning on converting your minivan into a camper DIY, or you’d prefer to hire a company to do it for you – there’s plenty of inspiration out there to get you started.

Most minivan RVs feature a kitchen and a double bed. Some also have storage space at the sides and a portable toilet hidden away. Make sure you go for a conversion that fits your needs. Happy minivan camping!

Renting a campervan before you buy is a great way to try out a van. Use the coupon code wayward40 to get $40 off any van rental with Outdoorsy. (Click here to browse campervan rentals near you) 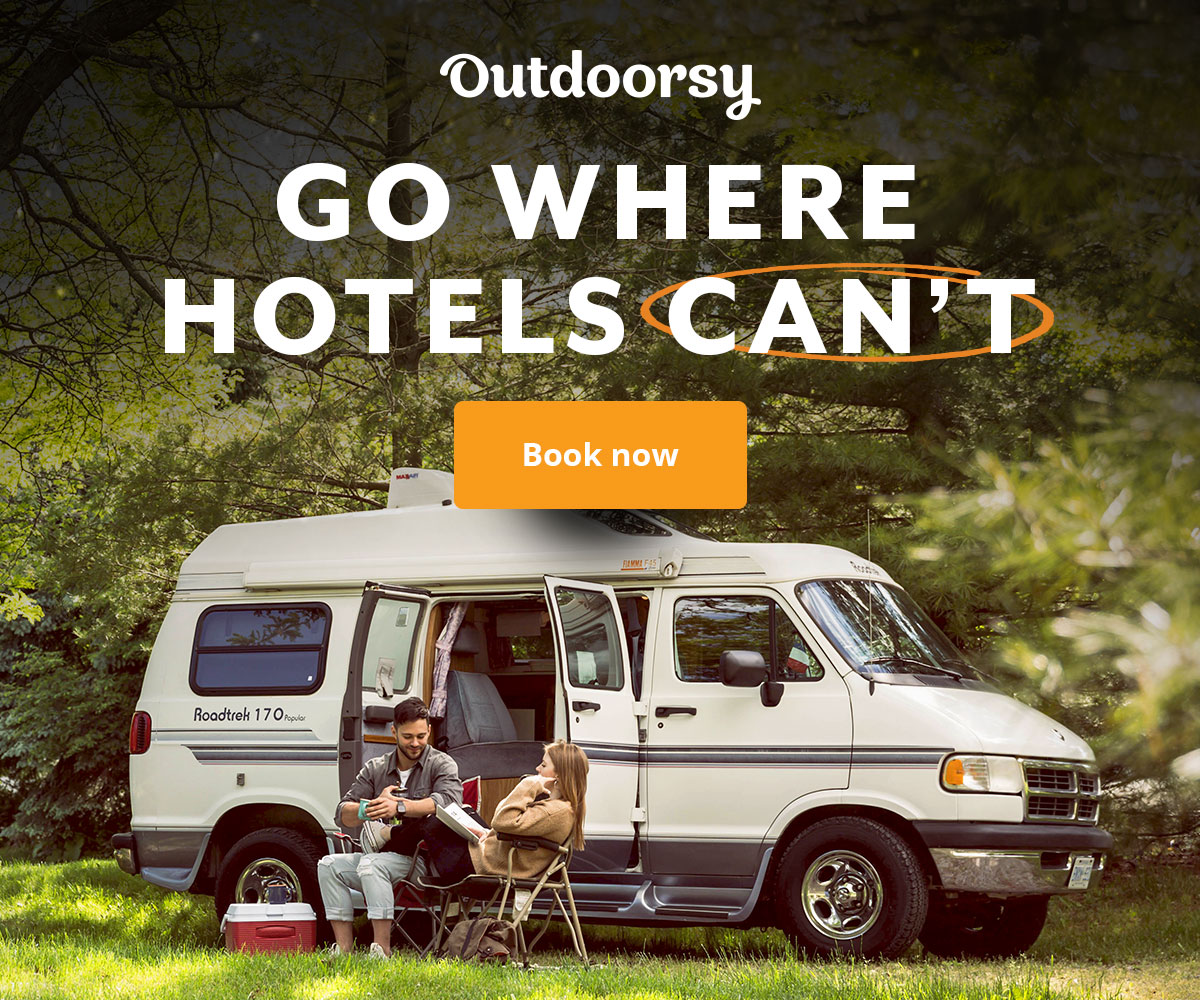 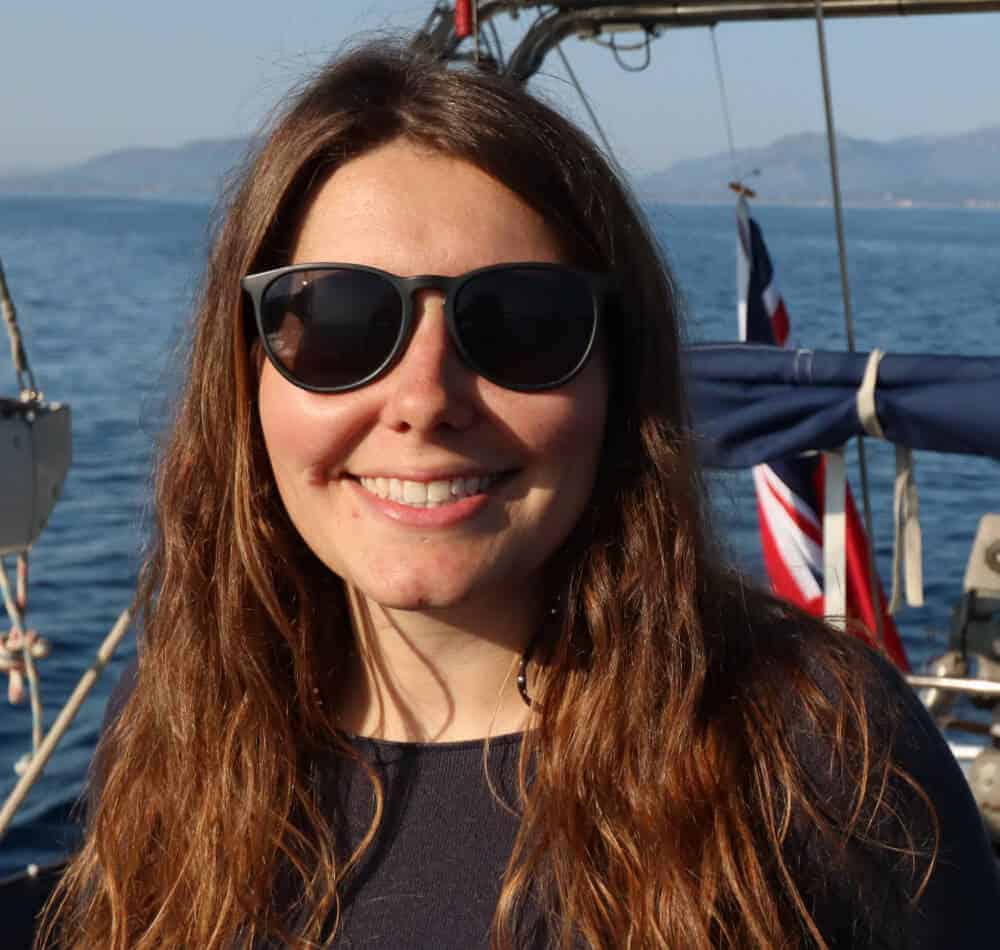 I spent my childhood holidays exploring Europe on my parents’ motorhome. Now, I live, work and travel on a sailboat with my husband Ryan. If you like, you can follow us on our YouTube channel, where we’re documenting refitting and cruising on our Tayana 37.

We participate in the Amazon Services, LLC Associates program. As an Amazon Associate, we earn from qualifying purchases.
659shares