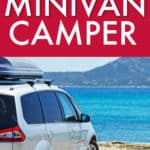 In 2013, Tamara Murray and Chris Trenchel started to feel sick of their life in San Francisco and started to consider a new way of life, one that involved a minivan camper conversion rather than a high-end city apartment.

Tamara worked for a public relations firm and Chris for the city, and both felt like they had to work too hard to pay the bills in the most expensive city in the United States.

“We felt like we were wasting our youth,” Tamara said. “We saw this TED talk about a guy who said to take five years of your retirement and spread them throughout your working years. So we decided to take a sabbatical.”

They started with a plan to take one year off and toured Latin America. After their whirlwind tour of South American countries, they’d become addicted to a life of freedom and couldn’t imagine going back to a 9-5 job.

So, they bought a used minivan, a Kia Sedona, with plans to do a minivan camper conversion and travel the United States.

How they built their minivan camper conversion on the cheap

The couple bought a cheap used minivan with plans to turn the car into a minivan camper conversion. They chose a minivan camper over a small RV because it was more fuel-efficient, easier to maneuver, less conspicuous and cheaper.

But the couple found a couple of downsides to the minivan….mostly that it’s not as spacious and has no built-in storage like some larger campervans.

They wanted to make a functional minivan camper conversion but didn’t necessarily want to make any permanent changes. They also wanted to keep the back row of seats to legally seat more people and didn’t build out a bed or storage in order to preserve fuel efficiency.

“We took out the middle seats and folded the back bench set into the floor. We put a foam mattress that makes a bed where we sleep when it’s cold,” Chris said. “At the foot of the bed there’s enough space for us to have storage, so we put milk crates that act as drawers. We put our clothes on one side and on the other side is our kitchen stuff. There’s also space for chairs and a table we bring out to the campsite.

Their costs to convert the minivan were crazy low, just $200 for the full-sized foam mattress, dairy crates for storage, curtains and a sunshade.

The bike rack tripled their conversion cost, which ended up being a little under $700.

You can tour their custom minivan camper conversion here:

Where they liked to stay in their minivan camper conversion

The couple spends a lot of time in campgrounds minivan camping, and typically plan their route based on weather.

“We really like hiking and biking, so we do that, but we also work when we travel in our minivan camper conversion,” said Tamara. “It’s important for us to have cell service and it’s nice to have a campground with electricity so we can charge our laptops.”

They also use the website Trusted Housesitters, where you can stay for free and watch over someone’s pets.

“The first one we did was in Cedar City, Utah,” Chris said. “We were taking care of someone’s house and their little Pomeranian, three cats and four chickens. We were right next to Zion National Park and did some good hiking.”

“We also did a short stay in Albuquerque with three dogs,” Tamara added. “It was nice being in a neighborhood versus a touristy area. Our favorite one was when we took care of a farm in Asheville, North Carolina.”

They’d get up in the morning and spend two hours taking care of over 100 chickens, geese, ducks, goats and a couple of dogs. They also learned how to milk goats and in the evening we’d collect eggs and put the chickens away.”

“There were chicks; we were hatching eggs,” Chris said.

“It was a great way to experience it without being a farmer forever,” said Tamara.

Next, they’ll live in a house in Boise for a few days and take care of a cat.

While the couple has loved their adventure in their minivan camper conversion, they’re quitting life on the road to settle down for awhile in Santa Barbara.

“When we’re not traveling we’re going to join recreational activities, start home brewing beer, hang out with friends,” said Chris. “Have a garden. It’s hard to build community when you’re traveling a lot.”

He said the two have learned valuable lessons while living in their minivan camper, including one to simplify stuff.

“Being in the minivan camper, you can only have stuff you really need. In San Francisco, we had all this stuff we didn’t use very often and it built up. Now we’ll make more deliberate decisions when we are in Santa Barbara in a house. It’s nice not to have clutter and spend money and time on all these things that aren’t important. That’s one of our main takeaways.”

The two have a blog of their adventures called NomadsWithaVan.com.

Other stories to check out: