Skip to content
*This post may contain affiliate links, which means I may earn a small commission at no extra cost to you. Please read our disclosure policy for more info.
1873shares 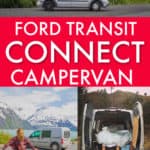 A Ford Transit Connect camper is a good choice for van life if you’re looking for an affordable, fuel-efficient rig that’s compact and easy to drive.

Keep in mind that these vans are truly tiny, so you won’t be able to fit as much inside as you would with a larger Ford Transit camper.

You can find lots of used Ford Transit Connects on the market as they were first introduced in the United States in mid-2009. However, Ford Transit Connect vans are known to have transmission issues, so it’s important to research the van you intend to buy and bring it to a trustworthy mechanic.

Some van lifers, like Josh Oakes of JustAManWithAVan, love the Ford Transit Connect: “The small size makes for an easy to maneuver vehicle, very similar to driving a car. Fairly decent gas mileage as well. Dual sliding doors make it nice to have entry point options in a camper and the height of the older body style (2013 and older) give you some extra headroom.”

We’ll tell you more about Transit Connect transmission issues and give you 6 awesome build ideas.

One of the biggest concerns with Ford Transit Connect campervans is the transmission.

According to CarComplaints.com, the 2012 Ford Transit Connect has the most transmission complaints of any model of year, with other older model years registering complaints as well.

On the flip side, man people in van life forums love their Ford Transit Connect campers and haven’t had problems.

As the years went on, the Ford Transit Connects saw fewer transmission complaints.

Which model year you pick for a Ford Transit Connect conversion largely has to do with budget and the amount of risk you’re willing to take with the transmission.

CarComplaints.com also registered complaints for issues with shifting in the 2011 Ford TransitConnect and the car dying while driving in the 2016 models.

“I recommend looking at the history of the van before purchasing one, if it was owned by a construction company at some point it was likely over used, which could cause problems down the line,” said Oakes.

He said some people overladed the Ford Transit Connects, which was tough on the transmission.

Pros & Cons of a Transit Connect for Van Life

Here are the pros of a Ford Transit Connect camper:

And the cons of a Ford Transit Connect campervan:

Morgan and Michelle had plans to travel to Hawaii; then Covid happened. The couple decided to embark on their adventures by road, rather than plane.

With a tight budget, they converted a Ford Transit Connect into a super cute DIY van conversion. They bought most parts off Amazon and other online retail stores.

The interior campervan layout features lots of storage room, two slide-out benches that turn into a double bed and a kitchenette.

Under the benches, there is plenty of storage space. The cooler is under the smaller bench. This bench can be moved to the back of the van to create more space behind the cab. The couple also mounted a roof vent to provide ventilation for the night.

Morgan and Michelle added a lot of clever touches to their Ford Transit Connect camper conversion to make it easy to enjoy the outdoors. On the side of the van, there is a big awning that rolls out.

At the rear of the camper, there are various wooden parts that pull out to create a table and outdoor sink. On the roof, there is a storage pod where they keep some of their gear.

For power, the couple has a portable solar panel. This allows them to park in the shade and leave it to charge in the sun, which is great in the summer. 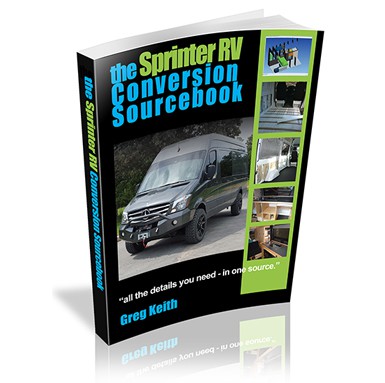 Learn how to build your own van with this detailed van build sourcebook. While the title reflects Sprinter vans, the concepts can be used on any DIY campervan conversion. You'll learn design considerations, how to plumb your van, choosing solar panels, installing water tanks and electrical and wiring systems. A great resource!

Roxanne is a 2013 Ford Transit Connect camper that has been converted DIY. It’s one of the few Transit Connects out there that can store a bike inside, which makes her pretty unique.

At the back of the van, there are two benches that are also a slide-out slat bed. They turn into a single bed at night. Under these, there’s lots of storage.

Next to the longer bench, there’s a slide-out compartment for a bike. It slides out at the rear of the vehicle, so you can store a bike inside. To fit the bike, you need to remove the front wheel.

That’s it. There isn’t much more to Roxanne, which makes her extra practical to take on any adventure.

Christina and Daniel do campervan conversions for a living. This 2017 Ford Transit Connect camper they built has a simple, yet solid interior. There are two benches and a kitchenette inside.

The longest couch turns into a double bed, which joins the other for added length. Under the benches are a refrigerator, a cassette toilet that slides out into the middle of the van, and plenty of slide-out storage boxes. There is a ceiling fan, as well as a skylight in the roof.

The kitchen looks fantastic. The worktop features a slide-out panel that offers extra surface for chopping, serving, eating or even working. The sink is solid and spacious with a pressurized water tap. The tap extends out and can be fixed into place on the rear door to create an outdoor shower.

Under the kitchenette, there’s plenty of storage drawers that lock in place when you’re on the road. At the rear of the van, there’s a slide-out table for cooking and eating outside.

Tristan is a 2011 Ford Transit Connect camper traveling around Europe. The wooden panels and dark tones of the soft furnishing give the interior a modern feel.

At the back of the van, there’s a platform double bed with lots of storage underneath. Next to the bed, there’s a big wall of wooden cabinets. These store a lot of the gear on board.

At the back of the cabinets, facing the rear of the vehicle, there’s a tap and mirror, which serve as an outdoor bathroom.

On the left hand side of the side entrance, there is a moving funnel sink the couple use to brush their teeth, as well as a storage area for toiletries and medication. Their cooler can be stored away on a stand, right up against the passenger seat, when they stop to camp.

When they can’t use a public toilet, Chad and Claire use a toddlers’ toilet and a big jar for going to the bathroom. For showers, they carry a solar shower

Chad and Claire work on the road, so they chose to build a sliding couch bed. This allows them to set up the couch during the day and sit on it with their laptops. At night, they slide the bed out to create a double bed. Rather than slats, they used plywood panels to create the platform. Under the couch, they keep their clothes, shoes and accessories.

At the rear of the van, they have installed a custom shelf that stores their batteries, food and cooking gear. It also contains a flip-out table, which extends further with a slider. They use the desk for all purposes: working, cooking and eating. Hidden behind the flip-out table, Claire stores all her kitchenware.

At the back of the van, they installed two flip-out tables on the doors. This is where they pop their water containers for doing the dishes and washing.

Pearl is a 2010 Ford Transit Connect camper. Laura and Erik converted it DIY into the perfect small camper van for a couple who lives on the road. The interior looks modern but rustic, with wooden panels and soft furniture decorated with geometric patterns.

Inside, there’s a platform double bed surrounded by cedar panels, even on the windows. This makes the back of the van extra cozy and dark for sleeping. Behind some of the panels, is some hidden storage for their clothes and accessories. For lighting, they use a magnetic light they can move around anywhere in the van.

Under the bed, there’s plenty of storage. The kitchenware, including the stove, is stored there.

They use a camping table and chairs to cook and sit outside the van. This gives them plenty of space where to prepare and have meals. Their Yeti cooler and generator are stored under the bed, too, on the left-hand side of the van.

Many van lifers swear by their cute and nimble Ford Transit Connect campers. If you get creative, there are lots of interesting and functional ways to build out one of these small cargo vans.

Downsides include transmission issues, 2-wheel drive and lack of space.

Other van life stories to check out!