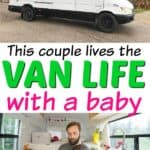 Jace Carmichael and Giddi Oteo love to travel and had the idea of giving up everything and living in a Sprinter van conversion for years.

That dream came true when Jace’s coworker decided to sell his 2003 Dodge Sprinter van, which had 329,000 miles on it. The high mileage didn’t stop the couple, who spent 7-8 months turning it into a Sprinter camper.

They hit the road in 2016, traveling from Arizona to Alaska, exploring the outdoors and working remotely on the way.

“The entire goal is to not live IN the van but to live OUT of the van – to take our passion for nature and the outdoors and turn it into a daily happening,” the couple writes on their website, Our Home on Wheels. “We hope to inspire those who follow along in our journey to join our travels, to get up off the couch, and to get out and breathe.”

After that trip, they sold the van, bought another, and prepared it for their newest addition: baby Juniper.

When their baby Juniper was born at the end of 2016, the new family took six months off, but are now back at it again, this time in a newly refurbished 2005 Freightliner Sprinter van.

This van had fewer miles than their original van – only 140,000 – and they spent three months building it into a camper van.

[You might also like: Single mom does a step van conversion on an old Canadian fire truck]

So far, the two love traveling as a family together with baby Juniper.

“I think the most positive is that we’re together all the time, which can be negative at certain moments, but it’s cool that Juniper has her mom and her dad, and we have each other all the time,” Jace said. “That’s been really cool to strengthen our family bond.”

“Jace has been around for Juniper’s life milestones, and it’s really great for him to be there through all her changes,” said Giddi.

You can learn more about van life with a baby in the below video:

How they built out their Sprinter van conversion

Their newer Sprinter van is a major upgrade from their original van. For this build, they opted to put in a bigger fridge, a freezer, more solar panels, a larger battery bank and inverter, a seat for their new baby and a composting toilet.

The two love their composting toilet and think it’s the perfect solution for van life.

“You put coconut husk or peat moss and over time your business turns into soil,” Jace said. “It doesn’t smell; it has a fan that’s constantly on that pushes air through, and it goes outside. When it fills up, you can legally dump it or dig a hole. The liquid tank you dump every three days depending on how much you’re going.”

The couple loves the spontaneity of their life. They don’t have to look for a hotel or set up a campsite. They come and go to various cities and forests when they please. And they support themselves with an online jewelry company, Carteo Handmade. Giddi makes the pieces.

“I love waking up in beautiful places,” said Jace. “It’s like owning a home in some of the coolest places except you don’t have a mortgage.”

Jace said someday, he and Giddi and the baby will probably settle down into a real house, but they’re not quite ready for that yet.

“We’re living in the moment and that’s what we want right now. We do have future plans of buying land and settling down, at least part of the year.”

For now, the couple is happy. They don’t know what the future holds. They might drive up the California coast in their Sprinter van conversion, head back up to Oregon, which they love. Or maybe they’ll continue on to Alaska. Right now, all that matters is where their heart takes them, and their love of their family. Sounds like such a simple, rewarding life.

You can follow Jace and Giddi’s Sprinter Van journey here.

OTHER POSTS YOU SHOULD READ: