You are here: Home / Van Life / Is a Sprinter Van Conversion Right for You? Our Ultimate Guide. 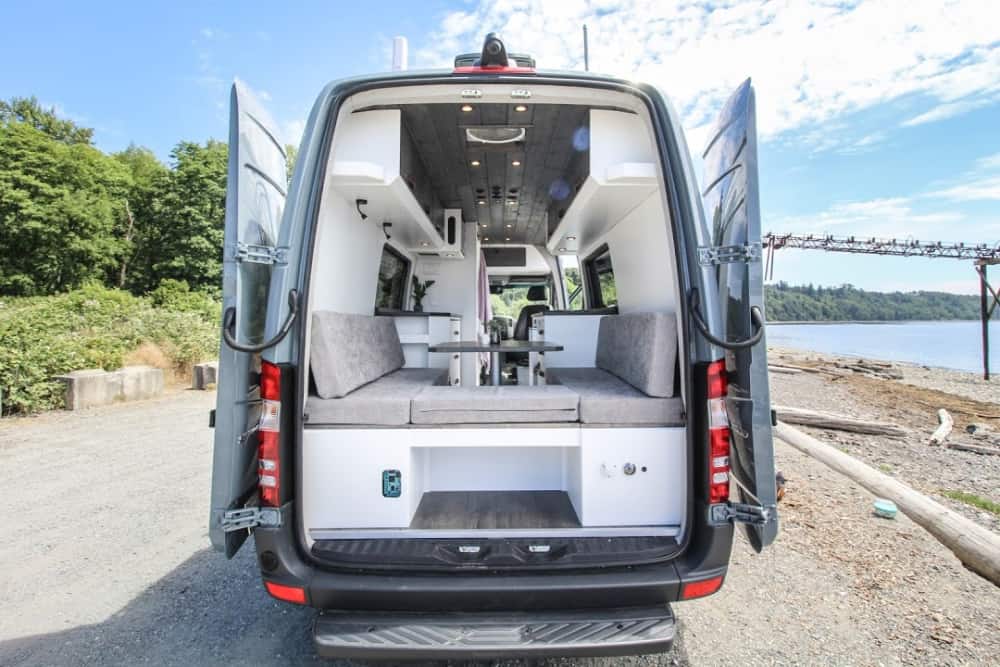 *This post may contain affiliate links, which means I may earn a small commission at no extra cost to you. Please read our disclosure policy for more info.
5037shares 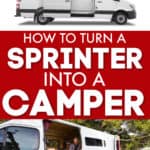 It’s easy to dream about a gorgeous Sprinter van conversion, ripe with all the bells and whistles you need to live the van life. Sprinter camper vans are good-looking, hardy and roomy – and get great fuel mileage – the perfect rig for immersing yourself in nature.

But are Sprinter van campers really worth the cost? A brand new Mercedes Sprinter van costs anywhere between $38,000 and $56,000, and that’s without the camper conversion.

What’s all the fuss about anyway?

In this article, we hope to give you as much information as possible about Sprinter van campers so you can make an educated choice about your camper van conversion.

Dodge vs. Freightliner vs. Mercedes Sprinter camper van – what gives?

You may have noticed a variety of Sprinter camper vans when you’re driving down the street, eyeing up what could be your next DIY camper van.

There’s Dodge, Mercedes and Freightliner Sprinters – so, what’s the difference?

There isn’t any. These are all Mercedes vans.

What happened is this: to avoid the 25% chicken tax, Mercedes would build its vans in Stuttgart, Germany, then take them apart to ship them to South Carolina.

That factory put the vans back together as “American made” vans.  The Sprinters were branded as Dodge between 2001 and 2007.

Then in 2007, Chrysler Split off from Daimler and Dodge Sprinters went away. From there on out, they’re either branded Freightliner Sprinters or Mercedes Sprinters.

Most recently, Mercedes-Benz announced it will finally start manufacturing Mercedes Sprinter vans in the United States. In 2016, the company broke ground on a new $500 million facility in South Carolina to build its commercial vans. 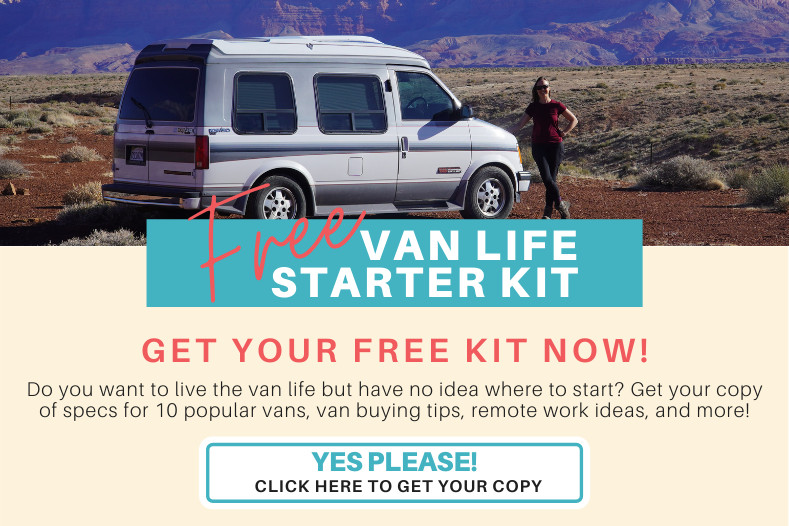 How to pick the right Sprinter van camper

Mercedes Sprinter vans come in a wide variety of lengths and heights. You have to decide just how much room you want inside the van for your camper van conversion.

Go to dealerships and spend some time walking around and exploring the various Sprinter cargo vans.

Maybe you’d be happier with the smallest, cheaper version (144” wheelbase with a living space that’s 11’ long by 6′ wide), or maybe you want to really go for it and get the longest wheelbase, high-roof van (170” wheelbase, with  15’ long and 6’ wide living space).

Once you have an idea of what you want, you can consider a buying a new vs. used Sprinter van.

There are tons of used vans out there, and some people rave about the Dodge Sprinter vans being some of the most reliable for van life.

People rave about Dodge Sprinter vans being some of the most reliable.

Sydney Ferbrache of Divine on the Road was on a mission to find a good deal on a Sprinter van camper. She searched the internet, used Gar Gurus, Carfax and Autotrader to find just the right Mercedes van.

“I was honestly just on a mission to find a Sprinter van with less than 100,000 miles that was also under $20,000,” said Sydney. “We just happened to find the Mercedes van that fit the criteria and had it shipped from Virginia.”

Sydney ended up with a 2011 Mercedes Sprinter with a 144” wheelbase. She didn’t want the longer Sprinter (170” wheelbase), because she wanted to easily fit into a parking spot.

Sometimes, you just have to look around until you find the right van. Click here to check out the various Sprinter van options on the market now.

Looking for a smaller camper? Check out the Mercedes Metris camper conversion.

Should you choose a Sprinter van camper? The pros and cons.

There’s a lot to think about when deciding if you should go with a Mercedes Sprinter van for your camper van conversion.

Here are the main negatives:

Want to rent a Sprinter camper before you buy? Use the coupon code wayward40 to get $40 off any van rental with Outdoorsy.

This is a great way to see exactly what you need in your Sprinter van conversion and what length and type of van you need. It’s way cheaper than buying a van you regret!

Building out your own Sprinter camper van is going to be far cheaper than hiring someone to build it out.

Kristen Borr of Bearfoot Theory chose to have a 170″ van built by Outside van. Check out her stunning conversion in this video:

For people who can’t afford that type of price tag, there are other options, like going with the DIY approach.

DIY will take you longer and may require a lot of reading and watching of YouTube videos, but it’s worth it to save thousands.

For a DIY Sprinter van camper, I highly recommend this book:

Then you’ll want to check out the Sprinter RV Conversion Sourcebook, a step-by-step guide to building out a campervan.

Don’t let the name fool you – this book works on any DIY van build.

Take a peek inside:

This amazing 378-page ebook has everything you need to know about converting any van into a camper. It doesn’t just apply to Sprinters!

Sydney Ferbrache of Divine on the Road built out her 2011 Sprinter camper van for just $6,000, and it looks absolutely gorgeous inside. The single biggest component of her build was the electrical system, which cost just over $1,300.

“We prioritized electrical first because it’s what makes you the most comfortable in the camper van,” says Sydney. “We have a 1500 watt inverter, two 96 amp hour batteries and 400 watts of solar”.

Here are a couple of Sydney’s budget tips for a DIY Sprinter camper van.

“There are always things you can work around and make less expensive if you get creative with it,” says Sydney. “You can always find alternatives to the expensive stuff for your Sprinter van conversion.”

If you’re looking for something between custom and DIY, check out 9 amazing Sprinter van conversion kits.

If you’re obsessed with van life like me, you probably love browsing through Sprinter van campers for ideas on what to do with your build.

Whether you choose to build out your own van or go with a Sprinter van conversion company, it’s great to jot down ideas as to what’s important and what’s not inside your campervan.

Here are some of the best Sprinter van conversions on the web.

I just love watching SoWeWent’s journeys in their rad Sprinter van camper. This San Diego couple travels part-time with their baby girl, and their photos are phenomenal.

The two facing couches in the rear make a great van bed design, and don’t those hammocks look just so relaxing?

You’d be amazed by how much cool stuff they fit in their Mercedes camper van conversion.

We Roll With It

If you’re jonesing to see what you can do with a 4×4 Sprinter camper van, you’ll have to check out these guys.

This overland Sprinter van with an interior by Tourig is built for heavy off-roading, with a solid axle swap out, 28-gallon reserve fuel tank, 40 gallons of water, 375 watts of solar and 600 amp hours of lithium batteries, this off-road rig is ready for anything.

What’s amazing is that We Roll With It’s van started out as a plain white cargo Sprinter van. Looks way different now, right?

We just love the modern and clean look of Freedom Vans Sprinter van campers. Plus, this bed design makes great use of space inside a smaller Sprinter van.

I love following Kristen’s adventures in her Sprinter van conversion by Outside van. She opted for a 170″ wheelbase, which gave her and her boyfriend plenty of room to roam around in their Sprinter van.

In this Sprinter van camper, I especially love the little work table that also serves as a lounge area for hanging out.

How much is a Mercedes Sprinter van camper?

Sprinter van campers can really run the gamut in terms of price. A DIY camper van will be much cheaper than a custom build. A new Mercedes Sprinter cargo van starts at $33,740. A new passenger van can get up to $41,290. Remember, those are base prices. You may be able to do a DIY Sprinter van conversion for under $10,000. Custom builds will cost you upwards of $20,000-$50,000 in many cases. 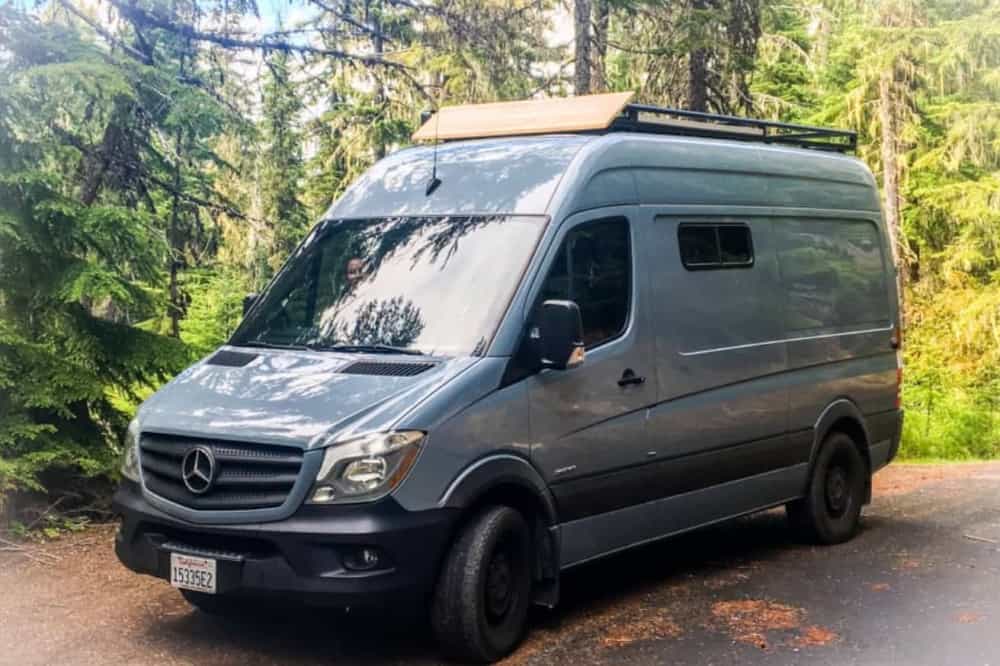 How much is a Mercedes Sportsmobile?

Sportsmobile has been converting vans since 1961, and is a reputable camper van conversion company. The typical Mercedes Sportsmobile costs about $95,000 for the van and the conversion. Of course, Sportsmobile offers other packages like a partial conversion, which is significantly less. Or you can design your own Sportsmobile van and those prices vary.

How much does it cost to live in a van for a year?

Living in a van for a year really depends on which type of van you buy and what type of lifestyle you lead. If you mostly camp for free on public lands, known as boondocking, you’ll pay significantly less than if you pay for a campsite every night. The cost of a camper van can vary between $8,000-$100,000. Your daily cost of living depends on how much you drive the van, whether you cook or go out to eat, how much alcohol you consume, and whether or not you pay for campsites. I think living in a van for a year can be as cheap as $15,000 if you live frugally.

How high is a Sprinter van?

If you’re serious about living in a van and want a hardy vehicle to do it in, a Sprinter camper van might be your best choice.

Sprinter vans conversions get good MPG due to their diesel engines, are reliable and have the right amount of interior space for a camper van conversion.

If you like high-roofed vans but think a Mercedes is a little out of your price range, check out similar-sized vans like the high-top Ford Transit, the Dodge Ram Promaster or any van with a pop-type camper van option, like the VW Vanagon.

Check out these other van life stories:

We participate in the Amazon Services, LLC Associates program. As an Amazon Associate, we earn from qualifying purchases.
5037shares