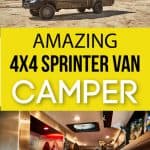 If you dream of taking a 4×4 Sprinter van camper off-grid and overlanding for days, you’ll want to check out this amazingly rugged rig.

We Roll With It’s 4×4 TouRig off-road van is ready for adventure, with suspension modifications, 37″ tires, a complete solar setup and plenty of interior living space.

This van isn’t only used for off-road adventures, though, it’s home to van life couple Kate and Levi.

I caught up with Kate to see what it’s like living in such a hardy Mercedes Sprinter 4×4 Camper, and how they found their home on wheels.

When Kate and Levi first met, they were both living and working in New York City. Kate worked in photography in the fashion industry, which required a lot of international travel, and Levi ran his own Jiu Jitsu school.

Both had an adventurous streak, with Kate growing up racing dirt bikes and van camping in Australia, and Levi spending his childhood in Alaska and living on boats.

So, they started a marketing company together called https://www.sweatequitycreative.com/, and started looking at a rig to call home.

Their first vehicle was a 2018 Sprinter 4×4 3500 with two sliding doors, which the couple built out as their first overland camper.

But once they landed TouRig as a client for 2020, Kate and Levi sold their first van and invested into a new Sprinter van camper, now called Bruce Banner.

Bruce Banner didn’t start as a 4×4 Sprinter van. It was a originally a 2wd and now has a 4×4 solid axle swap-out. The two wanted a rig that would bridge the gap between adventure van and large overland trucks.

“Once the solid axle conversion was completed in Florida, the Mercedes Sprinter 4×4 van had the look and the capabilities we were after, it pushed the limit of what was possible on the Mercedes body platform, but it was white. We don’t do white vans. So we drove it up to Portland to visit our friends at LineX The Coast,” said Kate.

LineX The Coast specializes in full-body sprays of overland rigs, and they did a two-tone paint job the couple’s new van.

“When he turned from a small white van to a big green monster truck, and that’s when we named him Bruce Banner,” said Kate.

The modifications on their Mercedes Sprinter 4×4 Camper

The exterior components on Bruce Banner are from Backwoods Adventure Mods, which make rugged front and rear bumpers for a variety of vehicles.

“They hadn’t yet made a roof rack, ladder or sidesteps but it didn’t take much convincing from us for them to start creating these,” said Kate. “We now have the first designs of each onboard and are doing R&D for the brand before they launch them to their product line.”

Then, the stunning interior of Kate and Levi’s new Mercedes off road camper is a TouRig design.

The Sprinter 4×4 camper van has a full shower, large bed, campervan kitchen, solar and lithium set up. Plus, TouRig Airliner Aluminum cabinets give the couple plenty of storage and latch shut when off-roading.

There’s also a kitchen with diesel cooktop, a heater and hot water powered by diesel and a 28 gallon reserve fuel tank.

“The TouRig team takes a lot of consideration into their builds to make something which is both practical, light weight, durable and also aesthetically beautiful as you want your home to be welcoming,” said Kate.

Bruce Banner is an 4×4 Sprinter van camper with some major off-road capabilities.

It has a Dana 60 front and 70 rear with 37 inch Falken MTs on Black Rhino Armory rims.

There are 600AH of Victron lithium batteries, which charge from both the alternator and 375 watts of solar. There’s also 40-gallons of water on board, which Kate and Levi use to shower, do dishes and wash down gear at the rear of the van.

The Mercedes Sprinter 4×4 Camper is also equipped with on-board air, which allows the couple to change tire pressure on the trails.

“We have lots of storage inside the van but also extra storage in Roam Adventure Co boxes on the roof and in the Backwoods Rear Bumper box,” said Kate.

They also have a lot of recovery gear on board in case they get in a jam while off-roading – everything from a winch, to MaxTrax, a HiLift jack and some gear from Factor 55.

“In the cabin we use the Garmin Overland to follow trails and we have Scheel-Mann seats to make the journey more comfortable.

Living the van life in their 4×4 Sprinter camper van

Kate and Levi love taking Bruce Banner out overlanding, exploring remote areas and finding solitude in nature. They can comfortably do a month in place in their overland camper, with possibly more time if near a stream.

“The best thing about van life is being able to experience so many beautiful locations and not having to commit to living in just one place,” said Kate. “With the van we can live by the beach one day and in a pine forest the next. This keeps me feeling creative and inspired, if I need a fresh outlook we just pack up and find one!”

Her least favorite thing is the lack of community. It can be hard having a lot of social time when everyone is on the move.

“We meet a lot of people and we are very social but I do sometimes miss some of the day to day routines of brick and mortar life,” said Kate.

One of the most challenging adventure they’ve undertaken in their 4×4 Sprinter van camper is when they were leaving Colorado during a blizzard and the highway was closed down.

They had to take Bruce Banner down an old logging road to get around.

“I don’t think that road would normally be terribly difficult but the weather conditions certainly made it challenging. We got some awesome shots that day,” said Kate.

The two don’t have any plans for stopping the van life anytime soon, and have this advice for folks thinking of trying it out:

Want to create an income stream before you live the van life? Check this out: 40+ ways to make money from a campervan