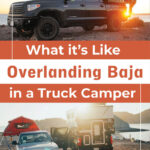 You may have seen him on the big screen acting opposite Tom Cruise in War of the Worlds, or on television on the show Shameless. But in his off-time, Justin Chatwin prefers camping and dirt biking to the glitz and glamour of Los Angeles.

Chatwin did extensive camping in a pickup truck camper shell before deciding he wanted something a little more comfortable for his backroads adventures.

“I wanted a fridge. I got tired of getting ice every day or two. I wanted water, a comfier bed,” said Chatwin. “So, on day I was scrolling Instagram and saw Bound for Nowhere’s truck camper by Four Wheel Campers, and it looked so cool, I just become obsessed.” 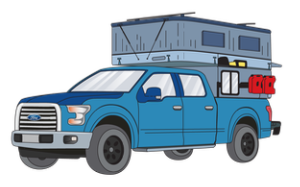 Four Wheel Truck Campers are lightweight, pop-up truck campers that fit on almost any truck. As with all sponsored content, all opinions and writing are our own.

He couldn’t stop looking at truck campers online and on the road, so decided to take the plunge and buy a Four Wheel camper called The Raven.

“I have a Toyota Tundra that was already built out with suspension, wheels and a light bar, and I wanted something I could just easily put on my truck,” said Chatwin.

Overlanding Baja in a Truck Camper

Chatwin’s first trip in his new truck camper was to Baja, California with his girlfriend. The two spent six months exploring the bays, beaches, mountains, towns and missions of the Baja peninsula.

“I’ve been going to Mexico for years,” said Chatwin. “I rode my Harley to La Ventana 11 years ago. I’ve really gotten to know Mexico and it’s totally won over my heart as one of my favorite places.”

The couple used the iOverlander boondocking app plus sailing guides to find the best secluded campsites.

“I had about 12 places on the map I’d never been to, like really remote beaches and little peninsulas,” said Chatwin. “I went to destinations I wanted to sail to, but I just drove there in my truck instead. Some people would stay for a couple weeks, but we’d usually stay 5-6 days.”

They also stayed on private property, paying locals between $2-$10 per night to park in picturesque settings. Locals would come over to offer fresh fish, fresh shrimp and even kayak rentals.

“The locals are so versed in knowing what gringos want and why gringos are there. They aren’t selling silver bracelets anymore, they are coming at us knowing what we are there to experience,” said Chatwin.

His Favorite Spots to Overland in Baja

In his years of exploring Baja, Chatwin has noticed a big difference. Where there once was complete solitude, there are now crowds.

“We used to ride our motorcycles down to Bay of Conception and we were the only ones at El Coyote. Now it’s jammed packed – it was a traffic jam down there,” Chatwin said. “I was bummed. But also inspired that people were getting out there and going adventuring. And the Mexican economy and Mexican people are being supported by this tourism, which is a positive thing.”

He won’t name one pristine beach which was 90 minutes from the main highway, down a dusty dirt road. It required 4WD and crossing a farmer’s private land.

The couple enjoyed paddleboarding, bought fresh goat cheese and vegetables at a local farm, and relaxed in the relative solitude. “There were only two vans and a few Four Wheel campers there,” said Chatwin.

He said everything has become so much easier now thanks to apps like iOverlander, where you can see pictures and read reviews of the road before you choose a campsite.

“The adventure is turning from let’s go down this road and see where it goes to let’s go on this app and see what’s available in this region. It’s opening a lot more opportunities for first time overlanders, it gives them courage to get down that road. A lot of the places we went – there’s a lot of people out there adventuring and it’s inspiring,” said Chatwin.

He recommends basing yourself around Loreto if you want to go overlanding in Baja.

“It’s a great hub for a lot of cool spots,” said Chatwin. “Plus, you can easily jump on a plane and be in Los Angeles in 1 hour and 30 minutes.”

Why full-time overlanding isn’t quite right for Justin

While on his epic pop up truck camper adventure in Baja, Chatwin realized living full time in a truck camper wasn’t quite right for him. He craved more community, stability and a sense of purpose. “If I don’t have somewhere to point my compass, I just end up spinning in circles, wondering ‘what’s the point of all this traveling?’” he said.

So, instead of putting his truck camper on a ferry and heading to mainland Mexico, he decided to buy a house in La Ventana, a winter hub for kitesurfing and other wind sports. But La Ventana is too hot during the summer, so he’s renting a house in White Salmon, Washington for the warmest months and the northern kiting season.

The couple will return to Baja in November, splitting their time between their home in La Ventana and truck camping in between. Chatwin wants to possibly drive down to Chiapas or Guatemala.

“We’ll just run into other people with Four Wheel campers on our way and they’ll give me advice on how to mount different pieces of equipment or various camper hacks,” said Chatwin. “They’ll also tell me about the best campsites. It’s a cool sub-culture and it actually made me re-activate my Facebook account so I can connect with these campers.”

The benefits of a Four Wheel truck camper

While some might prefer living the van life, Chatwin definitely thinks a truck camper is the best off-road rig for his style of camping.

Here’s a few reasons why he really likes his Raven truck camper:

It can go down rougher roads than a van.

He can take the camper off in about an hour and use the truck for other exploring or as a daily driver.

The camper is a pop-up camper, so is very low to the truck, creating hardly any wind resistance.

Chatwin can put quite a bit of gear on top of the camper. Four Wheel campers used extra heavy-duty struts’ on his Raven camper so he could put a Yakima cargo box on top, which holds kitesurfing gear and wetsuits. He can also strap the kiting board right next to it, and carry an e-bike on the back of the truck.

As mentioned before, he also loves the subculture of people who own Four Wheel Truck campers. “Those people living on the road are the craftiest, well versed mechanics and survivalists. It is a sub-culture community out there helping each other,” he said.

Next, Chatwin is working on shooting a movie in New Orleans, then will be back in the Pacific Northwest for summer, kiting in the Hood River area and doing camping trips in his Raven camper.

Life is definitely an adventure, one which Chatwin is grabbing by the horns.

Other stories about truck camping: