Skip to content
*This post may contain affiliate links, which means I may earn a small commission at no extra cost to you. Please read our disclosure policy for more info.
3278shares 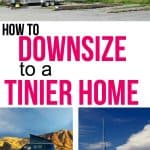 Have you ever walked through your house and wondered how on earth you got so much stuff? Do your eyes scan all those shelves in your garage, wondering how you’ll get rid of everything?

You’re not alone.  In fact, more Americans want to downsize than supersize their houses, with 37% of Americans saying they’d prefer a smaller house than a larger one.

But getting there isn’t easy!

As a society, we’ve accumulated so much stuff that the idea of going through it, sorting it, and donating, or throwing it away is so overwhelming that many never even attempt it.

Maybe you want to downsize to live in a tiny house. Or maybe your dream is an RV, a camper van or a sailboat.

Whatever the reason, downsizing and figuring out what to get rid of isn’t always easy.

All of us who live in a tinier home have done it, myself included. I got rid of most of my stuff to move onto my boyfriend’s sailboat in 2015, and now, all the clothes I own fit in the back of my Chevy Astro van.

I want to offer a few tips on how to get started paring down for your new life of freedom and adventure. These tips come from my friends Melody and Chris DiCroce of Saving to Sail, who downsized to move onto a sailboat.

They learned so much, and want to help people also live a tinier life, so they wrote a course called: How to Downsize to a Tiny Life: A Step-by-Step Process for Downsizing to Move into a Smaller Space.

The psychology behind getting rid of stuff

Getting rid of stuff can cause a lot of psychological turmoil. There can be real emotional pain behind getting rid of a family heirloom or your favorite toys from childhood.

Melody DiCroce said it was really hard for her to get rid of her nice clothes and shoes. To her, they were symbols of how far she’d come.

“A lot of times, you base your self-worth on things you own, because you worked so hard for those things and earned them,” she said. “For me, I felt like I was getting rid of everything I’d worked for. I had a killer shoer connection and a Chanel skirt I’d worked really hard to pay for, but there was nowhere to wear that stuff on the sailboat!”

Slowly but surely, she lost her emotional attachment to her stuff.

“It all starts with your mindset,” she said. “I wrestled with it and cried many times in the beginning, but after you rip off the band-aid, it gets easier. Then, it became more like a game, like how much can we sell on Craigslist today, who can sell the most, who can get the best price.”

Her husband Chris had a hard time getting rid of his drum set, but eventually he, too, broke free of his psychological attachments.

“We have so many memories attached to things, and we have to look at them with a critical eye and assess whether they’ll fit into our new lives,” he said.

Melody and Chris have studied downsizing so much that they want to help others pare down their lives. They’ve developed an online class and support group for people who want to live in sailboats, vans, RVs or tiny homes.

Check out their course here: Downsizing for a Tiny Life

The cool thing about their course is that it comes with a Facebook group so you can post questions and ask for support when you’re starting your downsizing journey.

Start with the simple stuff when it comes to downsizing

Downsizing your house to move into a sailboat, tiny home or RV can be a time-consuming ordeal, especially if you’ve been stacking things up and keeping things for years.

In order to make this transition less overwhelming, it’s a good idea to start small.

Go into your bathroom, for example, and just starting throwing away and recycling the junk. Go through your drawers and find empty shampoo and lotion bottles or makeup you no longer wear.

You can do this in most rooms in your house, because more likely than not, you’re holding onto stuff that can be thrown away.

The downsizing secret that could save you thousands

My boyfriend Tom still has a storage unit that costs him over $200 per month. He’s constantly lamenting the yearly cost and that he wishes he could just get rid of his stuff. But there are costly items in there, things he doesn’t want to just throw away.

A lot of people face this same issue, of putting their most prized possessions away in storage.

Melody and Chris also shoved a bunch of things into storage for one year, until they realized they should downsize even more.

The DiCroce’s got rid of even more stuff, and put some original art in a family member’s basement. They said they were so happy not to worry about paying for a storage unit every month.

“Money and the ability to pay becomes an issue, especially when living on a sailboat,” said Melody. “There were a couple times we couldn’t get online to pay our storage unit and it was a few days late. Then we were paying a late fee, and just throwing money away.”

Budgets are typically limited when cruising, so it’s good to think about all the different ways to save.

My boyfriend’s storage unit costs him $2,400 per year! Think of all the ways that money could be spent and used toward a traveling lifestyle.

You can learn more about downsizing tips and techniques in Melody and Chris’ course: Downsizing for a Tiny Life.

If it seems expensive to you, remember, if you sell just one thing, it will pay for the course! Melody and Chris offer all sorts of tips on how to sell your stuff, including how to write awesome ads, how to take good pictures, and where to post your stuff to sell.

Do you need help downsizing?

There are several stages to getting rid of stuff and figuring out what you want to bring to your tiny home.

Here are a few of the steps you’ll have to take:

1.) Identify and get rid of junk

Again, if you want a cheat sheet to help you out, don’t forget to download Melody and Chris’ Room-by-Room Junk Checklist! This is just one of many checklists you’ll find in their course: Downsizing for a Tiny Life.

7 thoughts on “How to downsize to live in a van, RV, sailboat or tiny home”