Home » My Life » Minimalist living on a sailboat: How I got rid of stuff 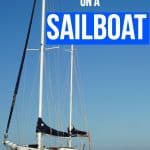 If you want to get started with minimalist living, a small space is what will kick you into gear. That’s exactly where I found myself in San Francisco, newly laid off from my job at KGO radio and about to move onto a 41′ sailboat with my boyfriend, Tom.

But I lived in an apartment and still had way too much stuff to start living as a minimalist, so it was time to go through the process of getting rid of stuff.

A year before I moved onto the sailboat, I lived in a car with Tom and that was my first step to minimalist living, but I knew I’d had to dig down yet another level this time around.

Getting rid of stuff for minimalist living isn’t always the easiest thing in the world. You may have lots of memories attached to your stuff. Or maybe you bought it for a high price and now feel guilty giving it away. Maybe it was a gift from someone you love. Maybe it’s clothes you want to love, but can’t fit in, can’t get around to wearing.

There are a lot of barriers to getting rid of stuff and becoming minimalist, and I’m glad moving into a sailboat forced me to do just that.

How a sailboat forces you into minimalist living 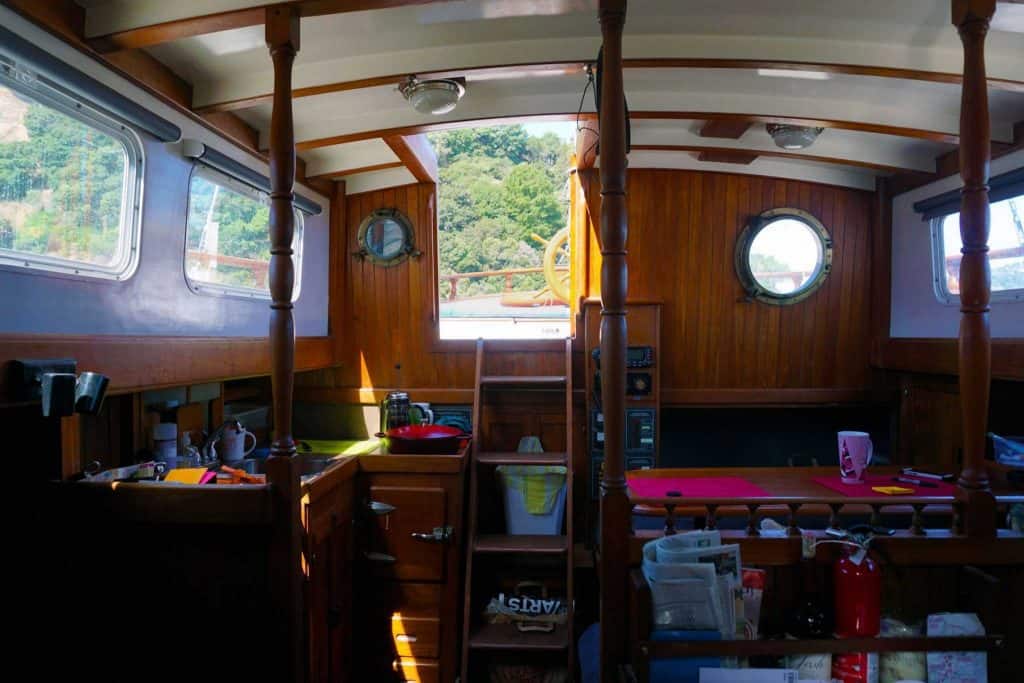 A sailboat is a very small living space, and when you account for tools, cooking ware, life-jackets, bedding, there isn’t really a lot of room for personal items.

There are no huge closets, no chest of drawers, no place to display knickknacks or photos, no cabinets in which to stuff endless kitchen supplies. In fact, anything sitting “out” would get thrown around the cabin during a battle with ocean swells, so best to keep the stuff to a minimum, and what you do have, tuck away and batten down.

My plan was to keep all of my clothes and shoes into the trunk of my small car with one tiny cabinet of clothes on my liveaboard sailboat.

So, I started getting rid of stuff and beginning my journey into minimalist living.

[You might also like: Couple sick of San Francisco rent gets rid of stuff and moves onto sailboat]

Slowly but surely, I began to lose my emotional connection with Stuff, even Stuff I’d hauled around for years. I don’t need this, or this, or that, I’d think as I chucked yet another item into the donation pile. I thought hard about each item, what it meant to me, its role in my life.

In essence, I was doing what Marie Kondo recommended before I’d even heard of her popular book, The Life-Changing Magic of Tidying Up. But I’d taken it to another extreme. In reality, I was living with almost nothing. And it sure felt good.

How getting rid of stuff made me feel 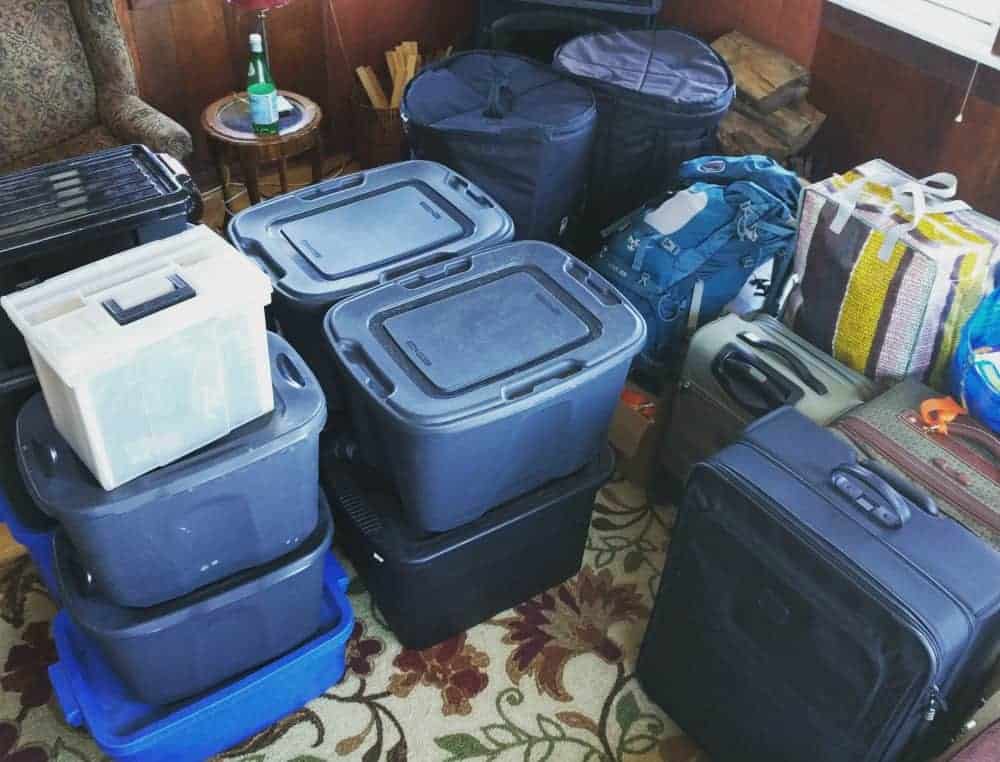 All I have left are a few bins containing childhood mementos, namely two boxes of Breyer horses I can’t bear to get rid of (I haven’t released my emotional connection yet), two conga drums, and a couple suitcases I will leave in my car as my current “closet”. Even looking at this photo, I feel I have too much Stuff for a true minimalist lifestyle.

I’ve come to realize that Stuff bogs us down. It makes our lives and our energy cluttered. It ties us to one place. It becomes a nag, a force, something to reckon with. It seems like Getting Rid of Stuff is the back of everyone’s mind. Even at a recent party crammed with 30-somethings in the Silicon Valley, the topic came up over and over again. “Does it bring you joy?” People asked one another. The usual resounding answer is “No.

I know that Stuff doesn’t bring me joy.  I have Stuff, but I use that Stuff to find pleasure and deep meaning in nature and dance and music. I have hiking boots and a backpack, which allow me to hike through the redwoods and desert and for 230 miles on the John Muir Trail. I have slippers that I wear while doing ballet. I have a car that drives me to see friends and go to the gym and see new, interesting things. My stuff is just an accomplice to my joy.

Through giving up Stuff and becoming minimalist, I have gained freedom. Independence. A clutter-free life, both visually and energetically.

I feel like a part of myself is hollowed out, ready to accept new experiences, new joy. Getting rid of stuff has helped me feel free.

How to start the minimalist lifestyle 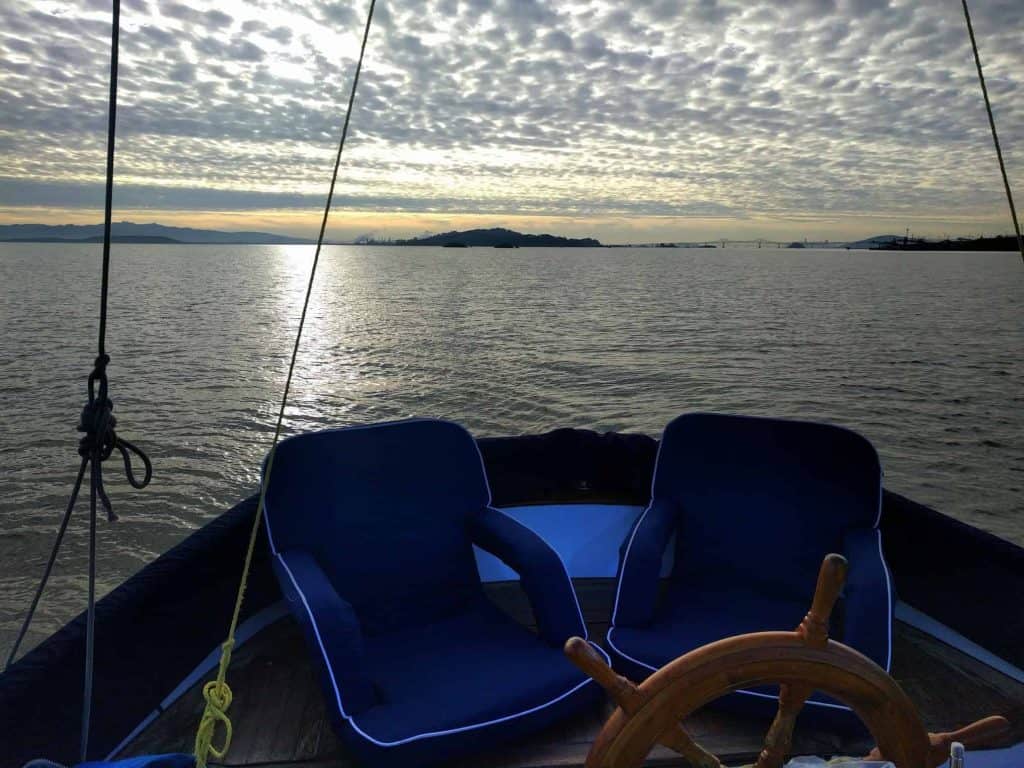 Moving into a sailboat doesn’t have to be the only impetus to getting rid of clutter and becoming minimalist. Even if you live in a house, there are things you can get rid of, cabinets to empty, a garage that is probably overloaded. Slowly but surely, you can distance yourself from stuff and open yourself to new experiences and adventures.

You don’t have to get rid of everything at once. Pick a box a week to sort through. Maybe a drawer in your bedroom. A cabinet in the kitchen. This can be a long process, so don’t overwhelm yourself with getting rid of everything right away.

2. Use Craigslist, eBay and Facebook Marketplace to sell stuff

If you have items of value or that you paid a lot for, consider selling them online. There are a lot of great resources out there for selling, and you can sell locally to not deal with shipping.

3. Give stuff to a charity

You can give stuff away to specific charities that you feel good about. My Mom donated a lot of her stuff to her church, which then donates the clothes to migrant workers. This could make you feel better about giving stuff away.

4. Give stuff to friends and family

I gave some of my cast iron pots to my Mom to look after. I don’t know when or if I’ll ever need them back, but I knew she’d use and love them. If you’re not quite ready to give up something completely, maybe someone would hold onto it and use it for awhile. Then, you can see if you actually miss it 🙂

5. Unload stuff on Goodwill or the Salvation Army

Everywhere, there is someone who needs your stuff more than you do. It feels really good to drop stuff off at Goodwill. I know someone else will use what I bought and will give it a renewed chance in life. I still donate regularly to Goodwill, even though I hardly have any stuff!

Why getting rid of stuff is so liberating

Getting rid of stuff helps us get away from the rat race. Once stuff loses its value, we’re no longer trying to “keep up with the jones'” or talk about what we have or don’t have. We have more time to breathe, read, and enjoy nature. We notice smaller things in life and appreciate them, instead of thinking about our next new car or outfit.

I’ve learned so much during my journey to a clutter-free life. Now, before I buy an item, I carefully think about it an analyze its costs and benefits. There is just so much we don’t need in this world, and sometimes, it’s hard to buck the consumeristic culture and become a minimalist.

But I think once you do shake the shackles of stuff and live the minimalist lifestyle, you won’t ever go back to owning more, wanting more, buying more.

I hope you, too, can experience the joy of decluttering and getting rid of stuff for good.