Home » Tiny Homes » Micro Homes: What are They and 3 Options to Check Out 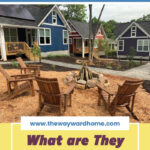 If you’ve been wondering which features define each structure listed above, you are not alone.

It seems like everyone we talk to is confused about what differentiates one small structure from another. Is it the interior? The method of construction? The site it’s built on or the cost to build? How about the lifestyle of the people living inside?

There is a lot to tackle here, but today I’m focusing my efforts on micro homes.

The Beginner's Guide to Tiny Houses: What You Need to Know About 400-Square-Foot Living

If you want to live in a tiny house but have no idea how to pull it off, check out tiny house expert Alexis Stephens' new book on tiny living. You'll learn:

I hope this helps with your tiny living dreams! What are Micro Homes?

Chances are, when I ask, ‘what is a micro home?’ something comes to mind.

Maybe you picture people living in a cozy home with efficient appliances, who are enjoying a quality lifestyle. Or maybe you envision a cool development with big windows and modern interior design located in an urban environment.

These types of small spaces are what I think of too. But what specifics can we look at regarding construction, design, or bedroom requirements to make our definitions more official?

There are many definitions of micro homes out there

The Urban Land Institute defines what they call a ‘micro unit’ as follows:

A working definition [of a micro unit] is a small studio apartment, typically less than 350 square feet, with a fully functioning and accessibility-compliant kitchen and bathroom.

I like it, but I was hoping for more. Then I found another, more thorough definition courtesy of modular building manufacturer Vesta Modular.

Vesta Modular’s definition also references kitchens and bathrooms but expands from there. So here is their definition of what micro homes are in their own words:

Micro homes are the “next step up” from tiny houses; they range from 400 to approximately 800 square feet and must encompass an independent kitchen, bathroom, and at least one window. These dwellings can be modular, pre-fabricated, or custom builds, and use materials and finishes comparable to traditional homes. They are spatially-evolved from apartment living with no shared walls, ceilings, or floors, and each unit has an independent outdoor living area such as a porch or piece of land.

We know from these two definitions that kitchens and bathrooms are essential, but sizing is at odds here. And we’ll need a square footage requirement to define these small houses.

I scoured the internet, but as you may have guessed, the answer just got murkier.

My search uncovered everything from ‘tract house’ to ‘vacation home,’ but nowhere did I find official documentation of what defines a micro home’s size.

Ironically, in the end, the most helpful definition of a micro home came from a guy on the internet named Dan.

Dan Cavallari, a writer/photographer from Denver, Colorado took a stab at defining micro homes, and I have to say, I think he did a pretty good job.

Dan wrote a whole article, but here is a bullet-point breakdown of the highlights:

What definition of micro homes would I choose?

It seems that micro homes are smaller than traditional houses, can be pre-fabricated or stick-built, must include features like kitchens and bathrooms, and are minimalist, energy-efficient structures intended to have people living in them.

We seem to be getting closer, but if I were to push the envelope just a little bit, I’d want to include verbiage that nails down a square foot range and addresses the life people are after when they try to buy a micro home.

So if you’ll indulge me, here is my own working definition:

Micro homes are standalone homes that are up to 800 square feet and built on permanent or semi-permanent foundations. They are carbon-neutral or low-impact homes that may include smart technology and are designed for well-being in a modern world.

Alright, I promised you all some houses, so are you ready to put the details aside and check out the micro/tiny/small space houses that are taking over our Insta feeds?

So now that we’ve decided what a micro home is, I wanted to list out a few companies currently making these small houses.

After working in the field of sustainable energy, Washington turned to real estate investment- and found some problems.

Washington was disappointed by the traditional approach of investors to view themselves strictly as money makers rather than problem solvers, so he began to explore another way- one that quickly turned decades of tradition upside-down.

What ensued was a quest to build micro homes, and indeed, he is.

South Park Cottages, in College Park, Georgia (just south of Atlanta), is a community of micro homes ranging in size from 335 to 615 square feet.

The homes have been constructed to include smart technology, and because Washington was willing to share the profits with those helping to design and build the homes, he spent much less money than he otherwise might have.

So what is he going to do with the additional profit? Pass the savings on to the people living in the homes.

These micro homes sold out in just fifty days.

The Cottages on Vaughan

Are you reading this article at your office? If so, go raid the supply closet for a pencil because this next micro home community- and the team behind it- will have you taking notes!

The Cottages on Vaughan are a series of eight micro homes built on a half-acre piece of land. The location of the site is Clarkston, Georgia, where a push for tiny homes was being made.

These micro-homes are the result of a collaborative effort between the city of Clarkston, Georgia, and the non-profit education and development firm, the MicroLife Institute, to create housing solutions with an emphasis on well-being.

In a press release following the approval of this experimental housing plan, City of Clarkston Mayor Ted Terry had this to say:

“We recognize that the past 50 years of urban sprawl has segregated communities, contributed to global warming, and exacerbated housing inequality. By experimenting and innovating with new development ordinances, we are able to allow a greater range of housing options.”

So the city partnered with the MicroLife Institute, and in 2021 The Cottages on Vaughan were born.

This pocket neighborhood of micro homes includes community green space and energy-efficient features like solar panels. It also integrates regenerative landscaping that serves as an additional food source for residents.

To say that these five-hundred-square-foot micro homes have been a success would be an understatement. And not only are they wildly popular, but they are also all owner-occupied.

This community serves as the MicroLife Institute’s calling card to show the world what’s possible.

And if they have it their way, more sustainable micro homes with edible gardens in walkable neighborhoods will be heading your way soon!

Alright, are you ready to hear about option number 3?

Excellent. Then let me tell you about a tiny house I heard about in California. Actually, there are three.

Robert Abasolo and His Three Tiny Houses in California

Robert Abasolo is a YouTuber, short-term rental expert, and co-host of the real estate investment podcast, The BiggerPockets Podcast.

He is also the mastermind behind three foundation-built tiny houses that are giving me micro home vibes.

LA Tiny House was Abasolo’s first tiny home build, and the cost of construction was 72k.

This price does not include land, and he acted as his own general contractor to build this living space, but still, LA Tiny House is an impressive feat!

It’s two stories tall, with a concrete and cedar siding exterior to die for.

This next house is called Casita Conejo!

Casita Conejo or rabbit house, if you don’t speak Spanish, is a 300 square foot luxury tiny home on a foundation.

With the cost of tiny houses now, you might not blink, but when Abasolo built Casita Conejo in 2020, he spent 165k. Oh, and it was modeled after his first tiny home.

This HareBnb (get it?) is a short-term rental with a second-story stand-up bedroom, a gallery wall, and a kitchenette you won’t forget. Honestly, if your family is tired of the cabin or vacations by the sea, this HareBnb is the ultimate getaway.

There is even a sofa bed for the kids!

Casa Mariposa, or butterfly house, is Abasolo’s second Joshua Tree build. And it is 800 square feet of design excellence!

Floor-to-ceiling windows line the front of the exterior, and pendant chairs dangle from the covered porch (or carport if you prefer to use it that way).

Casa Mariposa was originally intended for use as an Airbnb, but in 2021 Abasolo and his family decided to sell the property to focus on other tiny homes and upcoming projects.

I heard he’s in the process of building a premium glamping space concept in Gatlinburg, Tennessee!

We may not have solved the mystery of what defines a micro home, but maybe there’s no mystery to solve. Maybe it’s just another piece of the tiny home movement that we are all creating together.

If you are as interested in small-space living as we are here at The Wayward Home, be sure to subscribe, so you don’t miss a thing. We’ve got a lot more tiny houses and tiny house content coming your way.

Oh, and since everyone else weighed in, we’d like to invite you to comment below! How would you define a micro home?

Alaska is a millennial who wasn’t having it with the American narrative. So after a three-year breakdown and deep dive for meaning, she quit her life and started over in a tiny house. In 2021 she founded The Tiny House Concierge, a company that provides writing and speaking services throughout the tiny home industry. When she’s not conducting tiny house experiments or encouraging the public to examine what they value, she is adventuring and enjoying a life filled with tiny house magic.