Pro mountain bike racer Russell Finsterwald loves the thrill of pedaling through alpine scenery at a break-neck pace. Every day, you’ll find him in the Colorado mountains, training for his next epic race.

A few years ago, Russell decided he needed a rig to accompany him on these high-octane adventures. He looked at vans, but decided they didn’t have enough clearance to get him down remote mountain roads.

“We have a lot of 4-wheel drive accessible roads, and I do all this mountain biking and hiking,” said Russell. “The 4-wheel drive Sprinter vans are insanely expensive, so I knew that was out of the question.”

When he stumbled on pop-up truck campers from Four Wheel Campers, he knew that was the right rig for his lifestyle.

How Russell found his pop up truck camper 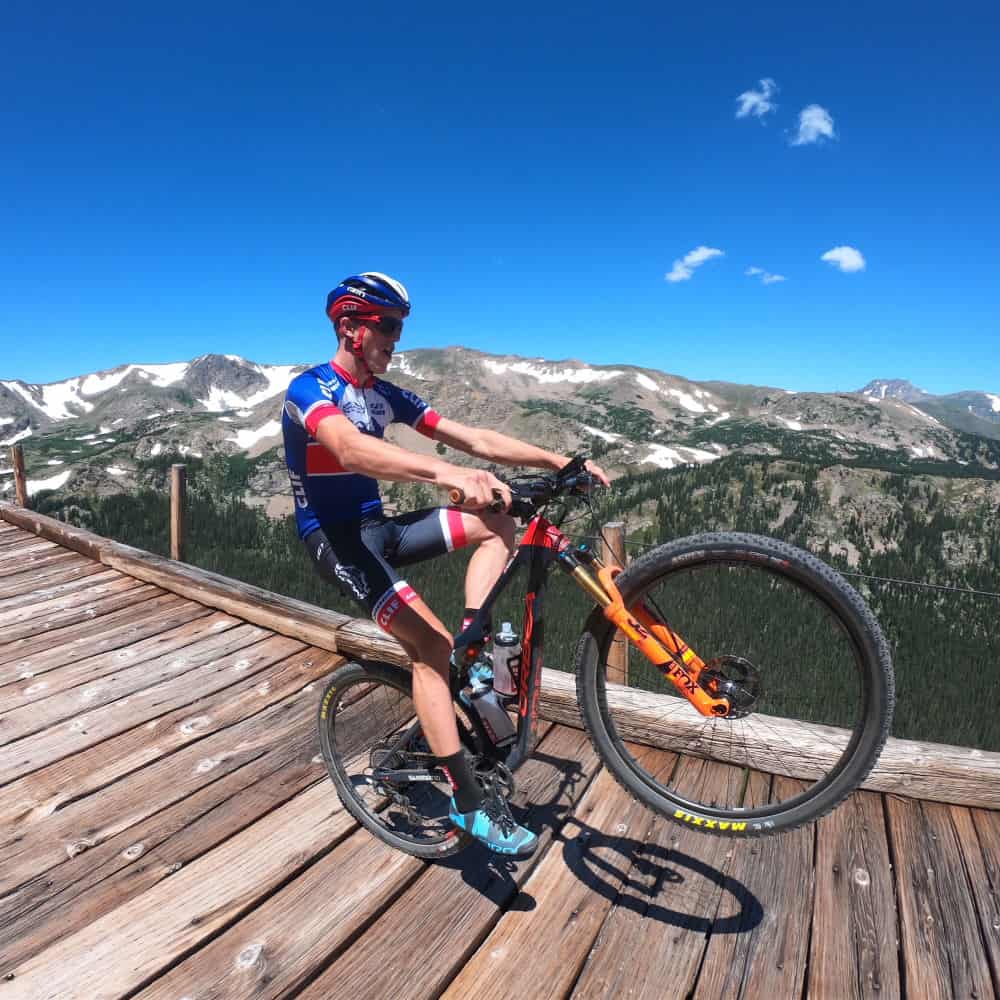 Russell looked near and far for the perfect pop up truck camper for his Toyota Tacoma. Finally, he found a used Four Wheel Camper out in California, so flew out west to buy.

“Four Wheel Campers is known for building a superior product,” said Russell. “There are some out there from the 70s and 80s that are still roaming around.”

He purchased the Eagle camper, which is similar (just a bit narrower) to the new Four Wheel Campers Fleet truck camper.

“It’s got plenty of room for our needs,” said Russell. “We’ve slept three people in there plus my small dog. It’s so cozy and works great as a spot to have shelter, cook dinner and enjoy the beauty of nature.”

His pop up truck camper has a heater, stove and an overhead fan. He also bought a 12-volt portable refrigerator that runs off solar panels, plus a portable outdoor shower.

But, the sky is the limit when it comes to options on a Four Wheel Camper. The truck campers are fully-customizable to your needs and type of travel.

Russell’s camping trips in his Four Wheel pop up camper 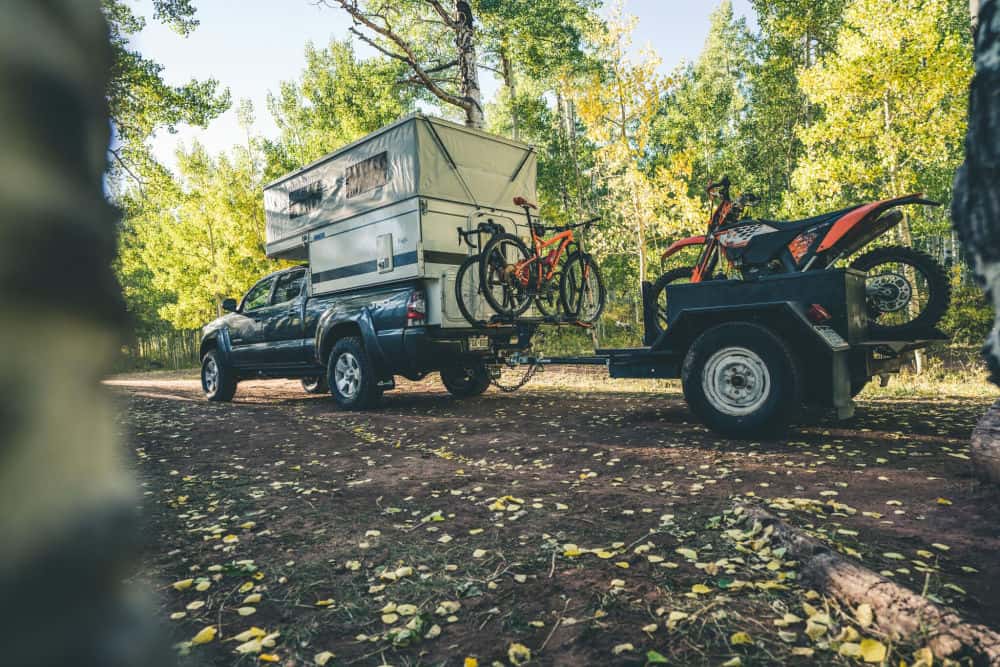 The pop up truck camper is perfect for Russell’s bikes

So far, Russell is loving his Four Wheel camper that fits snugly on his Toyota Tacoma. He’s taken it boondocking down bumpy roads in Colorado.

The pop-up truck camper is lightweight and goes anywhere the truck can go. The first trip Russell did with his girlfriend in the camper was right after they picked it up in California.

They traveled for two weeks from California to Colorado, stopping in Death Valley, the Alabama Hills and Zion National park before camping in the Colorado mountains.

“Telluride is my favorite mountain town so we hung out there for quite a while and did some hikes, then brought hte camper home.” 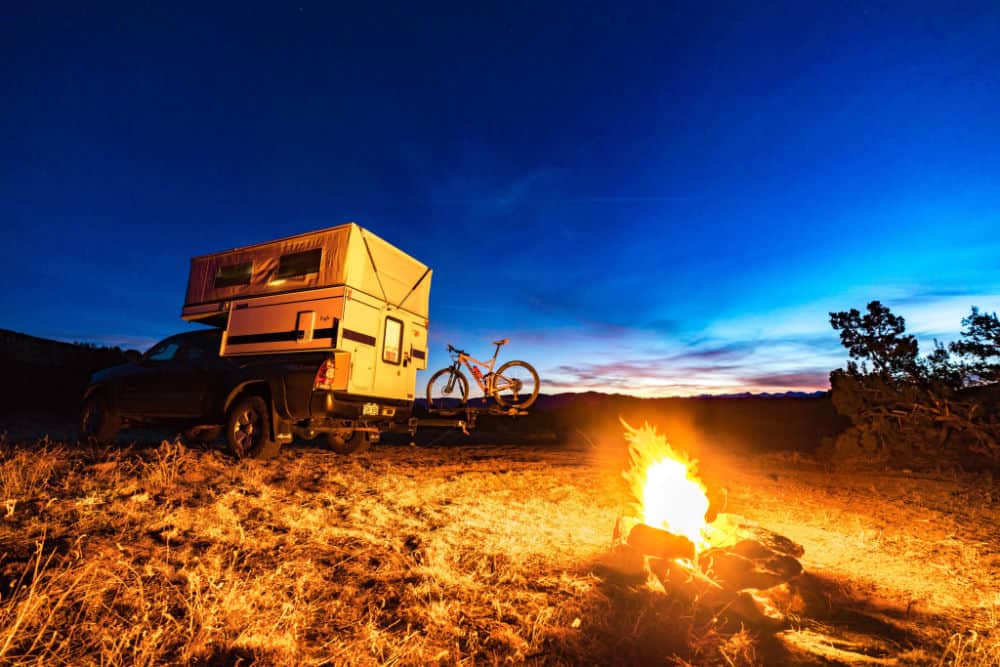 “But if I did want to take it off, it only takes 30 minutes to put back on. When I go camping, the pop up is really easy to set up. I just undo six buckles and push it up and it’s good to go. Takes about three minutes,” said Russell.

Russell and his girlfriend do weekend camping trips all summer long, with big road trips planned for fall when the competitive cycling season is over.

“It’s also perfect for the racing season because I take it to scope out tracks and more remote races,” said Russell.

Although he isn’t ready to live in his truck camper full-time, Russell is considering a larger trip with his off-grid rig.

“One thing we’ve talked about is taking the Four Wheel Camper down to the southern tip of Chile,” he said. “We’d probably do that over the course of four or five months. That trip sounds very appealing.”

Check out pop up truck campers from Four Wheel Campers.