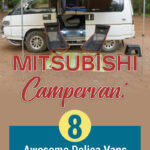 The Mitsubishi Delica (pronounced DEH-luh-kah, not Duh-LEE-kah) is a truck built in the early 1990s in Japan. Being boxy and compact, it has that irresistible 90s vintage look. This is precisely what makes it a much-loved vehicle among van lifers and auto enthusiasts alike.

The Delica features right-hand drive and swiveling seats. Some models have forward drive and have had a pop top installed, but not all of them. They are a go-anywhere, fairly stealthy van. Like many foreign-made vehicles, successful conversions make the most of the space available inside and focus on comfort rather than storage.

Check out campervan rentals by owner on Outdoorsy! These van rentals are a great way to test out a van before you buy. Test out Sprinters, Ford Transits, vintage VW and Dodge Promasters. All types of cool vans are on here. Use the coupon code WAYWARDHOME to get $50 off any van rental with Outdoorsy. Why a Mitsubishi Camper?

If you’re attracted to this little minivan but you’re still not sure if it’s for you, here are the main reasons why other vans lifers chose it.

The Delica is pretty small, especially compared to other American trucks. This makes it very easy to drive and park anywhere. You won’t need to spend lots of time maneuvering and it’s fun to drive.

Like many minivans built in Japan, the Delica is a very sturdy van, which means it keeps really well.

Mitsubishi campers look retro and will likely be spotted from far away everywhere; there is no question about that. Fans of mangas and Japanese culture, as well as auto enthusiasts, simply love the look of these tiny trucks. And who can blame them? They are charming and super cute.

The four-wheel drive version of the Delica is a legitimate off-roader. It features a 4×4 transfer case, a low center of gravity, a 5-inch ground clearance, and good approach and departure angles. These little guys can travel through muddy, sandy, and snowy terrain alike.

Thanks to its size, you can easily use the Delica as a car during the week to go to work. If you work shifts, you can park outside and hop in for a nap. Fancy a micro-adventure? Just pack dinner and head somewhere nearby to spend a night camping. There are so many ways to make use of it.

Is Mitsubishi Delica Legal in the US?

That’s a complicated question. The short answer is: you can register and drive the Delica on the road in some states. Let’s delve into the matter further.

In 2021, Delica owners across Maine and Rhode Island received a letter from the Department of the Secretary of State’s Bureau of Motor Vehicles informing them that their registration was no longer valid; the vehicle needed to be pulled out of the road within 30 days.

The reason? They did not meet federal safety and emission standards. Delicas can now only be used as off-road or farming vehicles in Maine. This goes against the famous 25-year rule, according to which foreign-market vehicles over 25 years old are not subject to the US safety and emission regulations.

According to VansFromJapan, it’s not possible to register a Delica in California either. The same laws apply there.

So that makes it three states: Maine, Rhode Island, and California.

While the limitations have been publicly confirmed by the spokesman for the Maine Secretary of State, we can’t find any official information for other states. However, the regulations are fairly new, so they could be applied elsewhere someday.

So if you hope to buy a Mitsubishi Delica, you’ll need to get in touch with local authorities to make sure it’s legal to drive on the roads in your state. Ask them if they know of any upcoming legislation, too.

Still interested? We’ve selected the best conversion ideas and examples we could find on the web. Not many of these van lifers are American, but their clever designs can certainly be imported by any Delica owner.

Josh and Vanessa travel around Canada aboard a 1992 Mitsubishi Delica. The guys have tested the Gertie’s off-road capabilities fully, as they have often driven on snow in winter.

The interior is in its original gray. The furniture they built is made out of ply and they added color with some blankets. The couple created a bed platform that turns into a bench; next to it fixed put a cooler stand and some shelves.

Gertie’s equipped with a skylight and motorized shades, which allow them to do some sweet stargazing before closing the curtains and going to bed.

Anne and Dan travel around Australia with their pooch Margot aboard Fern, a 1988 4×4 Mitsubishi Delica. Their self-conversion almost looks professional. Everything inside is either white or wood, giving it a very bright but cozy look.

They installed a system that can turn into a bed, a forward-facing bench, or a couch looking towards the back of the van. When the rear door is open, it offers amazing views. This has to be the best feature on board.

The kitchen pulls out on the side of the van, so you can cook indoors or outdoors. It features a sink, double burner, flip-up table, and a spacious counter.

Brett spent three months turning his Mitsubishi Delica into the ultimate solo camping adventure vehicle to tour the US. He left the interior in its original color: gray; but he added a lot of warm tones via the soft furnishing and wooden cupboard tops.

The layout he chose maximizes storage over everything. The numerous lockers he built are arranged in a U-shape and turn into a bed. He uses some of them as a table. The kitchen is at the back of the minivan, but it doesn’t have a sink – Brett keeps a 10L water jug in the van and uses wet wipes.

Droner Life s based in Brazil and owns a Mitsubishi Delica 1994 SWB High Roof. He decided to put his 3D design skills to use when planning the interior.

He planned and built a bench, which turns into a bed. Next to it and in front of it, there are storage cabinets. The kitchen is at the rear. It features a two-burner stove, a collapsible sink, and plenty of storage.

The whole design is very clever and sleek. It maximizes all the space available in the vehicle, with comfort in mind. The furniture is all white with light wooden covers, which makes the interior very bright.

Thomas is a landscape photographer living in the UK. Having a camper to travel to stunning places to photograph was a must for him, so he decided to convert an old Delica DIY.

The whole interior is taken up by an L-shaped bench, which he also uses as a bed. He decided not to extend it, so he has space to sit up anytime. Next to it, Thomas built a decent-size cabinet that acts as a table, workspace, and kitchen. He chose a modern rusty finish for all the cupboards and cork laminate flooring for better insulation.

Hutch Campers are a camper conversion company based in Australia. They work on a huge variety of rigs, but we thought this Delica looks particularly cool.

The room inside is divided into two. On the right, there’s a bench that turns into a bed. It’s the shell for a slide-out kitchen, which comes out at the rear. The unit is as long as the back of the minivan, so it offers a very decent space on which to cook.

On the left-hand side of the van, there is a storage room with two cabinets. It features a slide-out table, which lands right in front of the bench. This is a great, tidy setup for a solo camper.

Alex and Michaela travel around the world aboard Vanda, a Mitsubishi Delica. As they are on the road long-term, they added a second storey to their home: a big rooftop tent. This allows them to keep the van in day mode most of the time.

Like many other van lifers, they built a bench-bed. Next to it, there is a storage area that extends upwards all the way to the roof. The fridge is mounted on tracks, which slide all the way to the side door, so they can access the fridge from outside. The kitchen is at the rear.

Alberto travels around Europe with his girlfriend in a 4×4 Mitsubishi Delica L400. As the name of his Instagram and YouTube channel suggests, he loves going off-road and that’s what he mainly does with his Delica. He’s been off-road in Spain, Albania, Greece, Turkey, Slovenia, and more.

He self-converted the van himself, starting from scratch. He upgraded tires, mounted a snorkel, and improved the suspension. Inside, he installed laminate flooring and a kitchen with a fridge and sink. Next to it, he fitted a bench, which turns into a bed. All the furniture is in white.

Pros & Cons Of a Mitsubishi Delica

If you know anything about van life, you’ll know that every vehicle comes with its advantages and disadvantages. Choosing the perfect truck for you means understanding the compromises you’re willing to make. Below you’ll find the pros and cons of a Mitsubishi Delica.

The Mitsubishi Delica is a durable, reliable, and sturdy off-road truck that can take you pretty much anywhere. If you love boondocking in remote places and don’t mind living out of a very small vehicle, it will allow you to live the life you dream of.

Got a bigger budget and don’t want to crouch? Have a look at something bigger. These rad 4×4 Sprinter vans and these hardy 4×4 motorhomes will take you on plenty of fun adventures. Some of them even have a bathroom!

I spent my childhood holidays exploring Europe on my parents’ motorhome. Once I hit 30, I traveled the world on a sailboat with my husband Ryan. We've now settled in the Italian mountains but we're preparing to live the van life part-time with our pooch Ziggy.