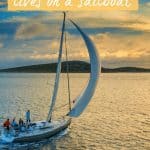 Beccie and Steve were farmers in Tasmania, off the coast of Australia, when they decided to look for a better life. They always had to tend the flock and couldn’t go far from home, so drastically changed their living situation by moving aboad a sailing yacht.

They purchased a 43′ Roberts Mauritius sailboat and moved their entire large family aboard.

“We had never been sailing before and it’s not in our families,” said Beccie. “We just realized it was the best way for a family as large as ours to travel. To learn, I went on a small sailboat race in Hobart, Tasmania, which was fun. Steve went on some overnight sailing lessons but that was the extent of our learning. The rest was done on the go.”

The family sold all their stuff and moved aboard with 10 kids at the time. Number 11 was born into the sailing life.

Settling into the sailing life on their boat 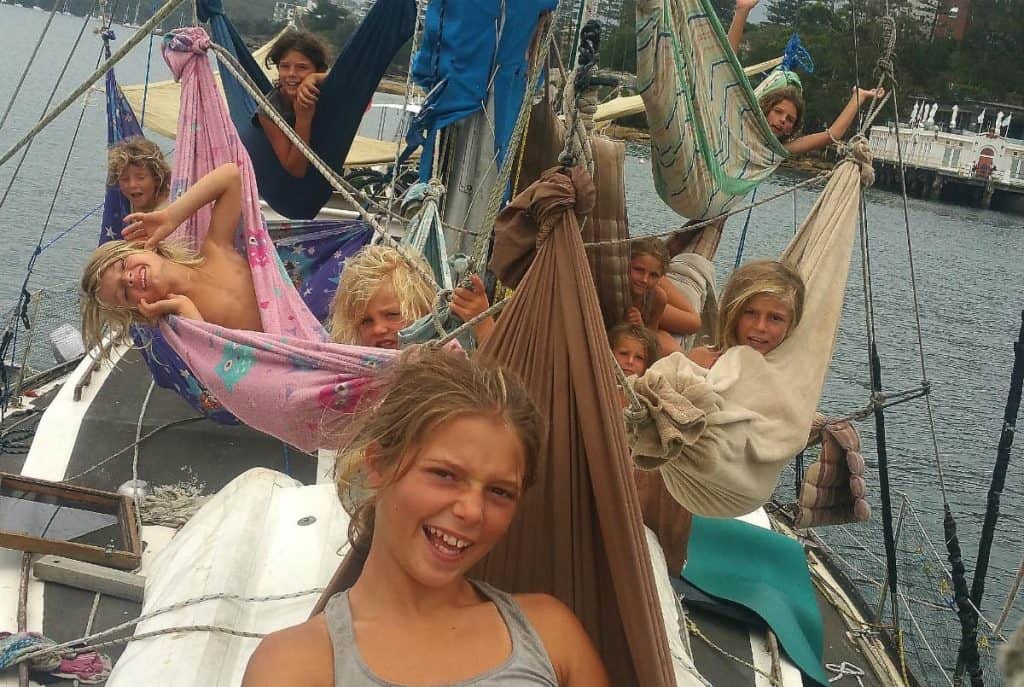 Squeezing such a large family onto a narrow, monohull sailboat wasn’t the easiest thing in the world for the family. They had to adjust to the lack of space, lack of a yard to run and play in.

“It was tricky at first as we were all settling in,” said Beccie. “We would always be on top of each other as we were used to a big house. The best thing was that it was summer, so the kids went swimming a lot. We had our car in the area, too, so took trips out of the small sailboat which also helped. But now, we’ve been on the sailboat for a year and are sailing up the coast, and we are all used to it. It’s our normal now.”

She said living on the sailboat has been really great for the kids so far, which range in age from newborn to 14 years.

“When we were farmers in Central Tasmania, we were surrounded by a community of only about 100 people,” she said. “It’s not very multi-cultural. Now, the kids have met so many different people from many cultures and they love it.”

Also, the kids have learned so much on their sailing adventure.

The family is also learning about star formations, how to read the sky and navigate by sextant. The kids know how to listen and communicate via marine radio, and have learned about motors and wiring from their dad.

The challenges of living on a sailing ship with kids 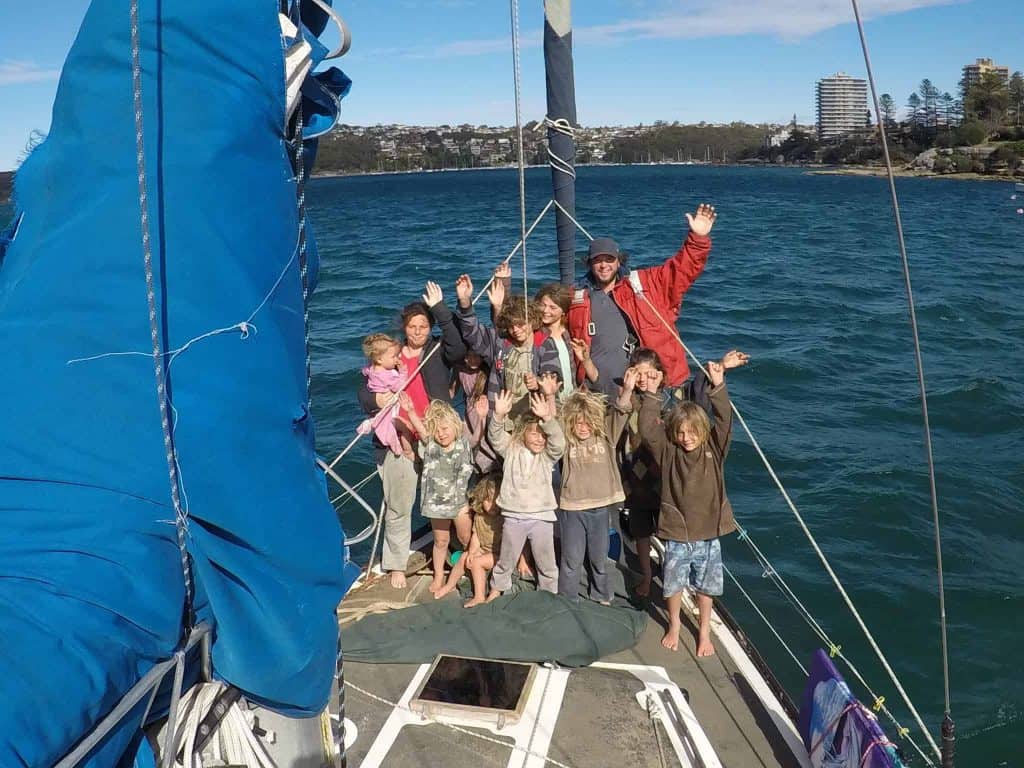 The biggest challenge for such a large family on a small sailboat is laundry.

“We have yet to discover a great system,” Beccie said. “We don’t have a washing machine and only wash in seawater. Drying also depends on the weather. Our sailboat always has washing hanging off it.”

It’s also hard for Beccie and her husband Steve to get alone time so they can connect over quiet conversation. Two kids sleep in the sailing yacht’s bow cabin, two in the port cabin, two sleep on couches in the main living area and four sleep on the floor.

“So whether during the day or at night, there are kids at our feet,” Beccie said. “Our cabin is the stern cabin, so unless we go to bed, there is nowhere else quiet to talk. The lack of quiet can be frustrating to us but we are getting used to it.”

The family also has to deal with storage, so clothes often sit on beds. Food, engine parts, paint tins, oil and lumber is stored on cabin floors. The couches are full of hoses, electrical gear and tools, and the parents’ cabin is full of sails and sail repair tools.

So, there isn’t a lot of spare space on their small sailing ship.

Beccie said the last biggest challenge is keeping the youngest ones entertained while under sail. The oldest five help with sailing and are always tethered on deck.

“The younger ones hang out below deck and they color, draw or play with Legos,” she said, but added sometimes, the kids do get antsy.

The entire family goes to shore every few days and they all take backpacks and stock up with food and walk around.

Why they love their aventurous life aboard their sailing yacht 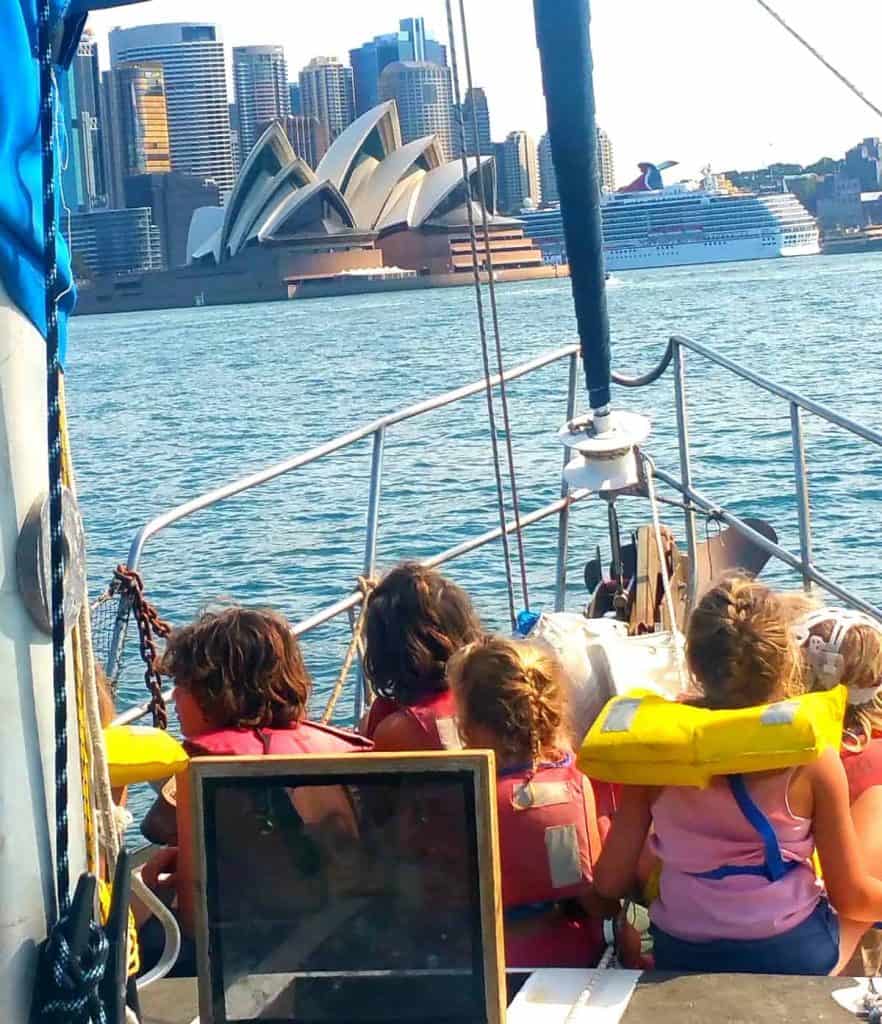 One day, this family of 13 hopes to buy a sailing catamaran so they can sail around the world on an even greater sailing adventure, to see as many people and places as they can. They want their children to see and experience the far reaches of the world.

Beccie said they love their sailboat lifestyle on the water and didn’t want to be caught up in a Groundhog Day type scenario, where every day is the same.

“On the water, everything changes daily. The water is never the same, the wind is different. We can move whenever and wherever we want – based on the weather of course. It’s a life of freedom and adventure. We know where our next destination is, we have checked all weather conditions, then we leave. Yet in doing all that, we never can tell exactly what will happen. It is a continuous step into the unknown. We feel a bit like Jack Sparrow when he said ‘Show me that horizon.’ Sailing is addictive,” Beccie said.

The family homeschools their children aboard the sailing ship, and right now, are living off savings until they can figure out a way to fund extended travel.

But in the meantime, the family is having a blast on their sailing yacht. Learning, exploring and being together.

“We all get along really well. We all are loving this life and enjoying ourselves. We are learning to live in a confined space, to let go of things, to laugh more, to love more and just be free. Living in a small space has its challenges but it has massive rewards for all of us. We are not looking back,” said Beccie.