Home » Van Life » Choosing a Van » Sprinter vs Transit: Which Is Best For Van Life? 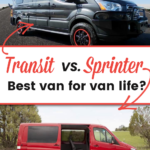 Whether you’re new to van life, and looking for the ultimate adventure machine, or a seasoned full-timer thinking about an upgrade, you’ve most likely encountered the great Sprinter vs Transit debate during the course of your research.

The Ford Transit vs Mercedes Sprinter argument has been dividing van dwellers for years now, and shows no sign of being resolved any time soon.

Before we weigh in on this touchy subject, though, let’s get a couple of things straight: both of these vans are particularly well-suited to van living, and either van can be converted in pretty much any way you can imagine.

Still, there are significant differences between Mercedes Sprinters and Ford Transits, and choosing which one is best for your van life needs is very much a question of personal choice.

In this article we’ll take an in-depth look at each van, weighing up the pros and cons, as well as taking things like cost, fuel economy, and suitability for van life into consideration.

Let’s start our own Ford Transit vs Mercedes Sprinter debate by taking a closer look at each van!

Until fairly recently, Mercedes Sprinters were the van of choice for DIY conversions. Sprinters have been around for a long time, with the original Freightliner introduced to the North American market in 2001.

This was long before the Dodge ProMaster and the Ford Transit vans were introduced, so Sprinters got a real head start on gaining a dedicated following.

Sprinters are available in three different size options, and come as cargo vans or passenger vans.

Most Sprinters have diesel engines, and are available with either 2WD or 4×4 drivetrains. You can find older used Sprinters for around $20,000, but you’ll pay upwards of $60,000 for a new 4×4 version.

With a sleek silhouette and clever branding, there’s no doubt that Sprinters have an irresistible appeal that has made them the darlings of Instagram.

Social media is full of images of sexy Sprinter conversions that have helped propel van life into the popular consciousness.

The Ford Transit van was introduced to the North American market in 2015, quickly becoming a dominant force in the commercial market.

Today, Ford claims around 30 percent of North American cargo van sales, and it looks like this popular workhorse is going to stick around.

It’s only in the last few years that the Ford Transit has started to make waves in the van life community, but more and more people are beginning to see the Transit’s potential for part-time or full-time van dwelling.

In 2020, the Transit went through a major overhaul, and Ford introduced the long-awaited AWD drivetrain as well as a raft of high-tech upgrades, including adaptive cruise control and pre-collision assist.

The majority of Fort Transits have gasoline engines, although 2020 also saw the release of a 2.0L EcoBlue diesel option.

Without a doubt you’ll pay way less for a Transit than a Sprinter.

Ford Transits don’t have the Sprinter’s perceived “drool factor,” and there aren’t as many resources for Transit conversions, but that’s changing fast.

Quite a few popular companies such as Vandoit are beginning to offer Transit conversions, which is only adding to this vehicle’s popularity.

Sprinter vs Transit: Things To Consider

Looking for the right vehicle for van life can seem like a daunting task. Whether you plan on converting a van to live in or having a van professionally converted, there are so many things to take into consideration that it can feel pretty overwhelming.

When it comes to Ford Transit vs Mercedes Sprinter, there are a few important points to think about that’ll help you decide which van might work best for you.

Sprinter vs Transit: The Nitty Gritty

Let’s take a closer look at how these two awesome vans compare in a few important areas.

Let’s face it: at some point every vehicle needs repairs, and getting issues taken care of is extra important when your vehicle is also your home!

Aside from budgeting for regular oil and tire changes, you’re well-advised to have some extra savings for when something unexpected needs to be addressed.

A Ford Transit is not only more affordable upfront, it’s also way cheaper to maintain.

Replacement parts are not only affordable but also widely available, which is a huge bonus.

You’ll also have extra peace of mind knowing that Ford dealers and mechanics can be found in almost every town, should the worst happen.

Things are a little different when it comes to owning a Sprinter. Internet forums are full of horror stories about DEF sensor failure, black death, and the dreaded limp mode.

When a serious problem arises a dealership is often the only place that can help, so you’ll have to find your way to the nearest big city.

Add in the fact that repair costs can be substantial and you may have to wait weeks for parts to arrive, and it’s no wonder this a major sticking point for many people in the Ford Transit vs Mercedes Sprinter debate.

For those who plan on traveling the back roads, especially during winter, a 4×4 Sprinter is definitely the most attractive option.

A 4×4 Sprinter has a much higher clearance than a standard 2WD model, and it can go just about anywhere, making it ideal for off-grid adventuring.

Although you’ll need to spend a lot upfront for one of these awesome vans, it will hold its value in case you ever want to sell it in the future.

The AWD Transit is becoming more and more popular, though it’s only available with a gasoline engine.

Although it’s a big step up from the 2WD Transit, you’ll need to pay for a lifted suspension if you want more clearance.

Another option is to pay for an after-market 4×4 conversion.

Although you’ll pay around $13,000 for a Quigley’s conversion from Sportsmobile, the overall cost could be less than what you’d pay for a 4×4 Sprinter, leveling the playing field in the Sprinter vs Transit game!

Sprinter vs Transit: Suitability For Conversions

As we’ve already seen, there’s much more interior standing space in a High Roof Transit, which could be the clincher for taller friends.

Although there’s less space in a Transit, overall, the square shape makes it easy to do a quick and affordable conversion.

Another big plus is the Transit’s interior width, which makes it possible to install a bed width-ways, freeing up more living and storage space inside the van.

When it comes to converting a Sprinter, the biggest advantage is the amount of space inside, especially in the 170″ wheelbase extended model.

If you’re planning on living in your van full-time or with kids, the huge amount of space inside a Sprinter will mean a lot.

Although you’ll probably have to sleep length-ways in your van, there are loads of ways to integrate storage space in your design.

Sprinter vs Transit: Diesel vs Gasoline

When considering the Sprinter vs Transit question, one of the most important differences is the fuel that each van uses.

Most Sprinters have Diesel engines, which not only means better fuel economy, but also a longer lifespan.

That said, diesel is more expensive at the pump, and locating the Ultra Low Sulfur Diesel (ULSD) that Sprinters require could be a real problem if you plan on traveling to Central or South America.

If you do plan on extended foreign journeys in your camper van, you’re probably better off going with a Ford Transit, in spite of the van’s inferior fuel economy.

Sprinters have been around for such a long time that there’s a wealth of information available when it comes to conversion ideas, layout plans, and problem solving.

Not only that, but thanks to the Sprinter’s popularity as a conversion van, there are loads of companies dedicated to providing Sprinter-centric toys, gadgets, add-ons, and extras.

Because the Ford Transit is much newer, there’s much less information and conversion support.

That’s changing, though, as more people decide that they sit on the Ford side of the Sprinter vs Transit debate.

Several companies are now offering Transit conversions, with companies like Vandoit and Modvans dedicating themselves exclusively to converting Transits.

Conclusion On Sprinter vs Transit

If you’re hoping for a verdict on which vehicle is better for van life, you’re out of luck!

Both of these vans are excellent choices for van dwelling, and each has its own set of pros and cons.

The Sprinter vs Transit debate rages on, so you’ll just have to decide which one best fits your needs and pick a side!

We hope you’ve found this article interesting and helpful in your quest to find your dream van. Please feel free to leave any questions or comments below!