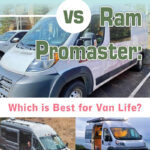 If you’re still in the planning stages of your van life adventure, it’s likely you still haven’t bought the van of your dreams. For many people, a 4×4 Mercedes Sprinter is the rig of choice. However, the costs involved in buying and converting this darling of Instagram can be jaw-dropping at best.

Fortunately, there are plenty of other fantastic vans out there, which brings us to the Ford Transit vs Ram ProMaster debate. We’re long past the point when these vans played second fiddle to the Sprinter. In fact, many people are starting to ignore the Mercedes altogether in favor of picking one of these vehicles.

That said, deciding between a Ford Transit and a ProMaster isn’t easy. Both vans are particularly well-suited to van life, and there are tons of awesome examples of Transit and ProMaster conversions out there.

Still, there are plenty of differences between these two popular vans, and it’s best to take them all into consideration before committing to one or the other. With that in mind, we’ve put together a Ford Transit vs Ram ProMaster article. We’ll look at both vans in detail, weighing up the pros and cons of each as well as loads of other factors.

Want to rent a Sprinter camper before you buy? Use the coupon code WAYWARDHOME to get $50 off any van rental with Outdoorsy. This is a great way to see exactly what you need in your Sprinter van conversion and what length and type of van you need. It’s way cheaper than buying a van you regret! 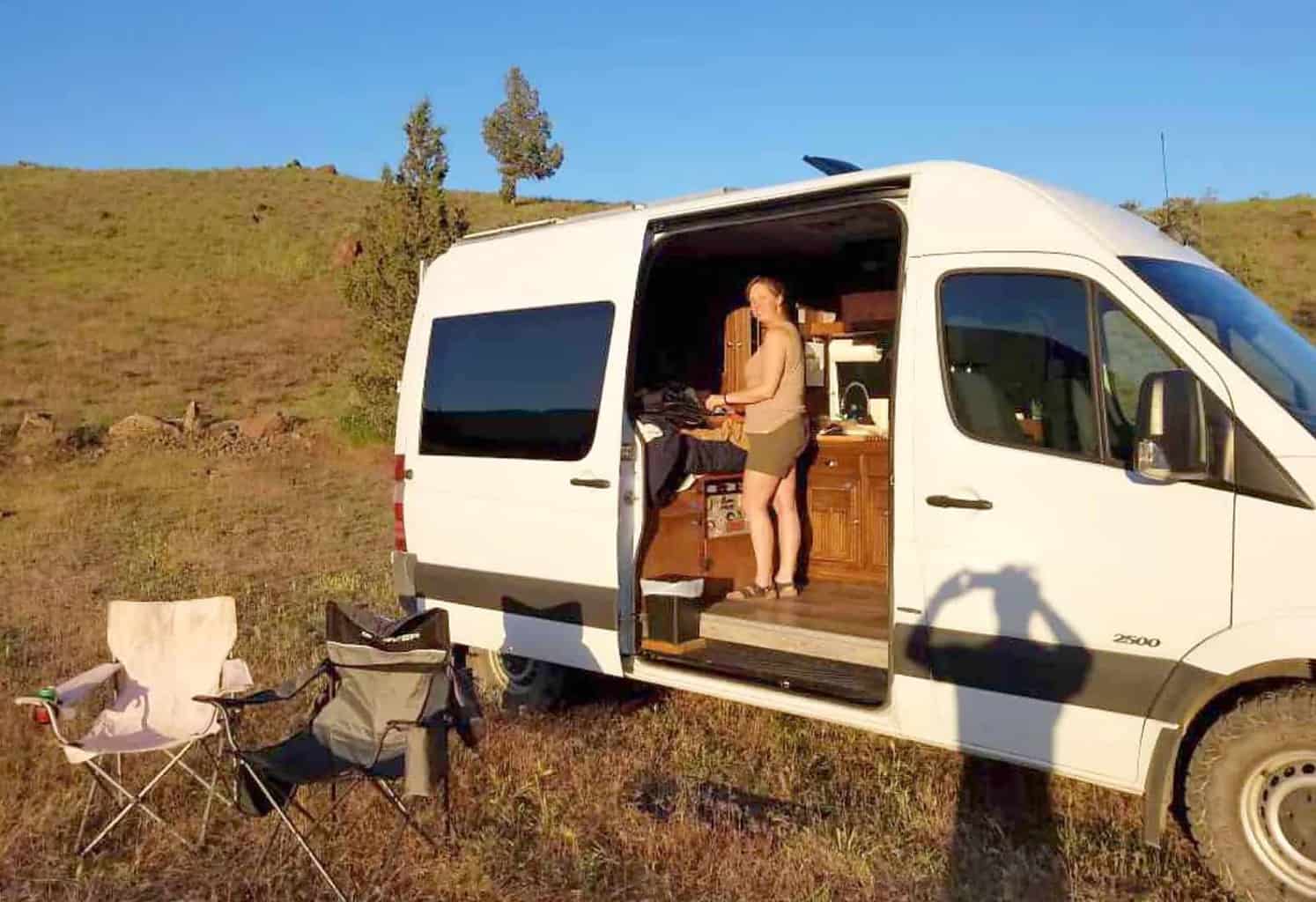 Although it feels like the Ford Transit van has been around forever, it was actually in the North American market in 2015. Nevertheless, it didn’t take long to gain a firm foothold and now accounts for 30 percent of all van sales in the United States.

Needless to say, van dwellers quickly began to realize the potential of the Ford Transit for converting to a camper. Although the Mercedes Sprinter and Dodge Ram ProMaster are still the most popular options for van life, the Ford Transit is catching up fast.

The Transit became even more appealing in 2020, when Ford completely overhauled the van. Aside from adding safety and comfort updates like pre-collision assist and adaptive cruise control, the manufacturer also released an AWD Ford Transit.

This particular model had been eagerly anticipated and went a long way to leveling the playing field in the Sprinter vs Transit debate.

Although Ford had planned to launch a 2.0L EcoBlue diesel Transit, plans were sidelined due to the coronavirus pandemic. Unfortunately, the manufacturer has since decided that there isn’t enough demand for a diesel van in the United States.

On the bright side, Ford plans to release an all-electric E-Transit van in mid-2022. We can’t wait to see how that turns out!

Price-wise, the Ford Transit is one of the more affordable large panel vans around. You can find an older van for as little as $10,000, while a brand new Transit will set you back as much as $40,000.

The Fiat Ducato has been one of the most popular cargo vans in Europe for decades, and was launched as the Dodge Ram ProMaster in North America in 2013. Since then, the ProMaster van has become a familiar sight across the country and is known as a solid and dependable work vehicle.

The Ram ProMaster is second only to the Mercedes Sprinter in terms of van life popularity. This affordable and reliable van is an excellent choice for van dwellers, which is why van conversion companies like Glampervan work only on the ProMaster.

Plus, you’ll see a lot of popular Class B camper vans such as the Roadtrek Zion and Winnebago Travato built on a ProMaster chassis.

The Ram ProMaster is definitely more “bare bones” than a Sprinter van or Ford Transit. There are fewer tech and safety features involved, but the ProMaster still delivers good fuel economy and a fairly smooth ride.

Although all new ProMasters have gasoline engines, you can find plenty of pre-2020 diesel powered models on the used market.

In terms of what you’ll pay for a Ram ProMaster, prices are comparable to those of the Ford Transit. The most you’ll end up paying for a brand new van will be around the $40,000 mark, while used ProMasters can be had for as little as $10,000.

Before we venture any further into the Ford Transit vs Ram ProMaster debate, let’s take a look a a few things you should consider before buying any van.

Without further ado, let’s take a closer look at how these fantastic vans measure up when we look at a few important areas.

As you head out on the road in your camper van, the last thing you’ll be thinking about is something going wrong with your vehicle.

However, things do break and it’s a good idea to budget for any repairs you may have to make. Plus, you’ll need to budget for regular maintenance so your home-on-wheels stays in tip-top condition.

If the Ford Transit vs Ram ProMaster debate was based solely on maintenance costs, there wouldn’t be clear winner.

There’s a good network of Ford and Dodge dealerships across the country, and replacement parts are affordable and easy to come by. Anyway, if the worst happens and you have to visit a small-town mechanic, you can be safe in the knowledge that either van is easy to work on.

The Ford Transit is available as a rear wheel drive or AWD van. Obviously, the AWD option is most attractive to those who want to get off the beaten path and explore the backwoods.

On the other hand, the Ram ProMaster is only available as a front wheel drive van. Interestingly, ProMaster owners see this as either a blessing or a curse. Some folks will tell you that, when equipped with the right tires, the ProMaster will get you anywhere you want to go. Others will advise against driving up steep and rough roads, as the ProMaster is likely to get stuck.

We’ve already mentioned the fact that the Ford Transit suffers from relatively low clearance. That can definitely be a problem if you’r thinking of tackling unmaintained back roads. Anyway, the last thing you want is to bottom out your van while on a boondocking trip.

Fortunately, an after-market suspension lift and bigger tires should solve the problem, although that could make your van feel a little wobbly.

As for the Ram ProMaster, it definitely seems like a better option for those who want a van with good clearance. Not only that, the ProMaster’s interior floor sits low to the ground, meaning the van has a better center of gravity than other vans.

If you’re looking for a comfortable, safe van that’s a joy to drive, the Ford Transit might be the better option. Known for its great handling and super smooth ride, the Transit benefitted greatly from Ford’s 2020 updates. There’s now adaptive cruise control and a power assisted steering system, which really helps when tackling steep, uneven roads.

On the other hand, the Ram ProMaster feels more stripped down and utilitarian. ProMaster owners complain of uncomfortable seats, and there certainly aren’t as many high-tech safety features on board.

One of the biggest ProMaster issues is an extra rear leaf spring, which makes the suspension overly stiff and the rear end stick up. Fortunately, removing the leaf spring is fairly easy and solves the issues nicely.

There can be little doubt that both the Ford Transit and Ram ProMaster make excellent choices for van life. Each van is well-suited to a DIY conversion, and which one you choose really comes down to personal preferences and specific needs.

The Ford Transit is probably a better option for those who need a lot of interior headroom. Plus, the 12 inches of extra cargo length you’ll get with the largest model will be invaluable to those traveling with kids or pets.

As for the ProMaster, one of the biggest advantages to converting this van is its boxy shape. You’ll have a much easier time with a DIY conversion, seeing as there are fewer curved lines to deal with.

That square shape also means you’ll have a ton of roof space to play with. There’s room for solar panels and a sweet deck up there! Furthermore, ProMaster owners just love the fact they can sleep width-ways in their van.

That’s all changed, as Transits and ProMasters have become more popular for van life. These days, you’ll find conversion companies dedicated to both vans, as well as online forums for advice and support. That said, the ProMaster has proven to be more popular than the Transit, so you’ll find more options as a ProMaster owner.

Check out these articles for more info:

As we’ve seen, both the Ford Transit and Ram ProMaster vans can be ideal for van life. There are pros and cons to each vehicle, but in the end, you really can’t go wrong.

You may have been expecting a definitive answer on which makes the better camper van, but we know better than to take sides!

At the end if the day, we just hope you’ve found this article interesting and informative. If it’s helped sway you in one direction or the other, then all the better. Feel free to leave any thoughts or questions in the comments section below!

Other Articles to Read: