Home » Van Life » Choosing a Van » 7 Best Cars to Live In: How to Choose the Right One 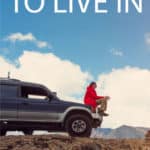 So, you’re thinking about living in a car? Congrats! Living in a car will save you a lot of money, and make you extra mobile for outdoor adventures. But the first step is scary – you have to figure out the best cars to live in and make a choice.

We started out living in a Toyota Prius for several months to pay off debt and get ahead in San Francisco. Now, we split our time between a Chevy Astro van and a sailboat.

There are all sorts of cars you can live in, whether you prefer a smaller, more stealthy care like a Prius, or a larger van like a Ford Transit.

In this post, we’ll go over the best cars to live in and how to start living in your car safely and comfortably.

READ MORE: How to Live in Your Car: Six Simple Steps to Get You Started

Toyota Prius – best small car you can live in

The Toyota Prius wins hands down when it comes to the best smaller car to live in. We managed to fit two people in the back of a Toyota Prius for several months in the bustling city of San Francisco.

You simply fold down the back bench seat and create a bed in the back.

If you’re going to be living in a car on your own, you can get rid of the front passenger seat to create more space, like David Swanson did in his Toyota Prius.

A Prius is not only amazing for stealth camping, but its hybrid technology allows you to run the engine all night long. This can either serve as your heater in a cold climate or air conditioning in a warm climate.

Plus, it’s unmistakable that you can’t get a better deal on gas mileage when you choose a Prius as your car to live in.

Check out this free Facebook group: Prius Living and Camping

Honda Element – best SUV you can live in

The roomy Honda Element is our top pick for the best SUV to live in. These vehicles are a cult classic among people living in cars, even though they are no longer manufactured. However, you can find some great deals on a used Honda Element.

This SUV camper is one of the best vehicles you can live in for several reasons.

Some models come with four-wheel drive, so you can explore more rugged destinations. It’s easy to convert into a camper thanks to its boxy, open design and all-weather rubber floors. Plus, it has a reliable engine and bi-parting side doors for easy access.

The cab is big and can be expanded with an add-on pop-top if you have some extra funds.

Toyota Sienna – the best minivan to live in

A Toyota Sienna camper is a popular option if you’re trying to live in a car. This is one of the only new AWD minivans on the market.

Plus, it’s bigger than popular small cargo vans, including the Ford Transit Connect and the Ram Promaster City.

A Toyota Sienna is a great car you can live in because its nimble, reliable and safe. These minivans have a combined gas mileage of 22 mpg and feature 3.5L, V-6 engines.

You can either throw a bed in back or pay for a partial or full campervan conversion.

Looking for a simple and comfortable mattress? Check out the best mattresses for van life.

Chevy Astro – our favorite budget vehicle you can live in

I’ve barely done anything to convert it into a traditional camper. We just fold down the back bench seat and prop our feet on a couple of stools I found at TJ Maxx, and it’s become our camper!

However, I do have a few vital items in here for camping and traveling full-time, including a portable 37-quart ARB fridge I can’t live without. And two 50-watt flexible solar panels connected to an inverter that runs my fridge and powers my devices.

There are several types of Astro vans you can choose from. There are Chevy Astro cargo vans, passenger vans and conversion vans, which are roomier with a fiberglass roof. There are normal back hatches or Dutch Style back hatches.

You can find really affordable Chevy Astro vans on the market – sometimes just $3,000 or less. Some people say their old Astro vans have gotten over 300,000 miles!

Check out this tour of my Chevy Astro van:

Jeep Wrangler – the best off-road car you can live in

If you want to live out of a car to explore remote 4×4 dirt roads, you might want to consider living in a Jeep Wrangler.

Jeep Wranglers aren’t as easy to live in as a van or an SUV because you can’t just throw down the seats and make a comfortable bed. Usually, people living in a Jeep either add a rooftop tent or a full pop-up by Ursa Minor.

However, Jeep Cherokees are bigger, and I know one woman who lived in her Cherokee for years in Los Angeles.

The main benefit of a Jeep is its ability to really get off-the-beaten-path to remote, beautiful campsites far from other people. A Jeep Wrangler camper is almost like backpacking, but on wheels!

Want to know what its like living in a Jeep camper? Man Living in Jeep Camper Hopes to Inspire

Ford Transit – a roomy van you can live in

If you’re ready to go a bit bigger, a Ford Transit is a popular option among people living in their vehicles. Plus, Ford Transit came out with its first AWD van in 2020, competition for the Mercedes Sprinter 4×4.

The Ford Transit is much more affordable than a Sprinter and doesn’t need to go to a special dealership for repairs.

Like the Sprinter van, there are varying height options. For full-time van living, a high or medium top would be the best choice.

Ford Transit vans are easy to drive and maneuver but have higher gas mileage than smaller vehicles you can live in.

Want to learn more about larger vehicles? Check out the 13 best vans to live in.

Ram Promaster City – a small cargo van you can live in

If you’re looking to put a camper set up in the car you’re living in, the Ram Promaster City offers a combination of stealth and open cargo space.

This little van has a highway fuel economy of 28 miles per gallon and a cargo capacity of 131.7 cubic feet.

The Promaster City drives with a 2.4-liter, 4-cylinder engine, and can be loaded down to 1,886 pounds. It also has a nine-speed automatic transmission.

One level up from the basic cargo van model, or the SLT, gets you a van that needs oil changes every 10,000 miles, a leather-wrapped steering wheel, cruise control and heated seats.

Check out this cool video of a Ram Promaster City conversion:

What you’ll need to start living in your car

Living in a car is a huge adjustment from an apartment or a house. You’ll have to get used to a much smaller living space and spending a lot of time outside the car. To get started, you’ll want a few basic items to stay warm and provide comfort.

You’ll need something comfortable to sleep on when living in your car. You can use a camping mat like this Thermarest from REI, or a trifold memory foam mattress popular among van lifers.

It’s great to bring a couple of comfy pillows so you can make your van bed as cozy as possible.

A way to cook and store food

You’ll most likely be cooking quite a bit when living in a car, which helps save money on going out to eat. We cook pretty much every night when we’re living in our van.

There are all sorts of camping stoves to choose from, but we have a single-burner stove called the JetBoil Half-Gen. This is an incredibly powerful small stove that also has great simmer control.

Most nights, we cook using a stovetop pressure cooker, which can make everything from chili, to sloppy joes, to sausage and bell peppers.

In the mornings, we use a JetBoil Backpacking Stove to quickly boil water for coffee and oatmeal.

You’ll also want a way to store your food. We use a 37-quart ARB portable refrigerator, which needs to be connected to solar panels or a solar generator.

You can also go with a good cooler, but you’ll have to chance ice every few days. If you don’t want to store any cold foods at all, you can eat boxed and canned foods that are simple to heat up on your camping stove.

We also invested in a few plastic bins in which to store our food.

Living in a car means you’re going to be spending most of your time outside the car. Think of your car as the place you’ll sleep at night.

During the day, especially if you’re boondocking, you’ll need somewhere to sit and hang out.

We bought this small folding portable table from REI which is just amazing, along with these two Moonlence camping chairs, which are perfect for a car or a small van.

A way to charge your electronic devices

When living in a car full-time, you’ll most likely need to charge your computer and other electronic devices.

This can be as simple and affordable as a 300-watt inverter connected to your vehicle’s cigarette lighter, to a more advanced setup like solar panels and an inverter.

The midway option is a solar generator, like this a Jackery Explorer 500, which you can charge using a portable solar panel or connected to an AC power outlet.

If you’re using an inverter connected to a cigarette lighter, be sure you don’t run down your battery. It’s best to use it when you’re driving somewhere, or when your car is running.

We hope you find the best car to live in

There’s no single best car to live in. It all depends on how you’ll be using your car and what you hope to get out of it.

Think about gas mileage and roominess before picking the car you’re going to live out of.

There’s everything from a Toyota Prius hybrid, to a Chevy Astro conversion van, to a large Ford Transit or Mercedes Sprinter. A lot of this also depends on your budget.

You can get a very affordable used vehicle off Craigslist or Facebook Marketplace. I bought my van for just $6,000 with only 57,000 miles, with barely any issues whatsoever.

So, don’t think price is a barrier when you’re thinking about living in your car.

We hope this guide gives you some ideas about the best cars to live in.

Other stories to check out: