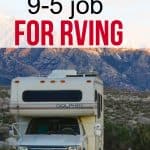 More and more people are leaving brick-and-mortar homes for cheap RV living. This is the case especially among millennials, many of whom are priced out of traditional housing.

According to the Recreation Vehicle Industry Association,manufacturers are expecting to ship 446,000 RVs this year, that’s up 3.6% from last year. Sales are expected to reach an all-time high in 2017 as head to the RV life.

Brittany Wittig and her boyfriend Tom are one of the many couples who are foregoing apartments and jobs for a life of freedom and adventure living in an RV year round.

How they made the switch to cheap RV living 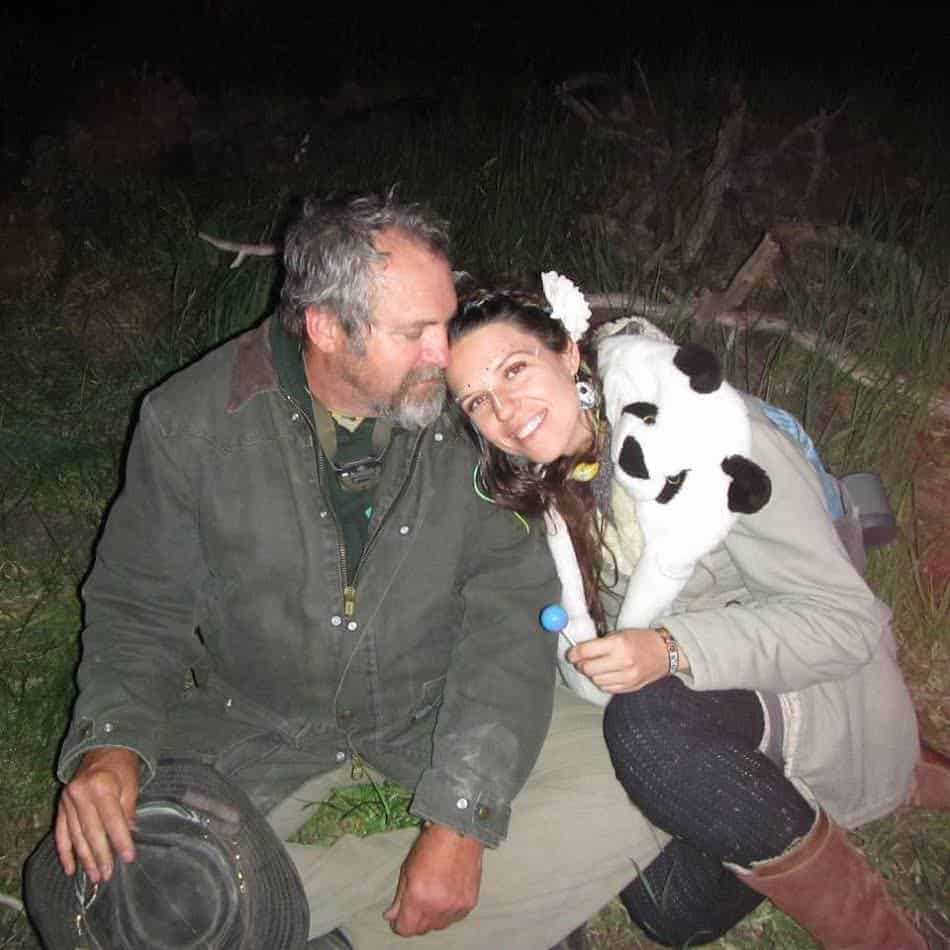 Brittany was feeling stressed out at her job in Eugene, Oregon as an assistant at a veterinary clinic when she first starting thinking about living in an RV year round.

Her boyfriend, Tom, was recently retired and bored while she worked, and when she got home, she was tired and stressed.

“It felt like some of the magic of our relationship was slipping away because our daily schedule didn’t feel right,” Brittany said. “Having met at Burning Man, our relationship is very much founded in excitement, passion and adventure.”

So the two decided to shake up their lives in a major way.

“I will never forget the feeling of driving away from our empty apartment for the last time, knowing that there was no stationary home waiting for us anywhere,” Brittany said, “That was pretty nerve-wracking and exhilarating at the same time.”

They biked to the Bay Area, their dog hating the entire trip, and then decided to embark on an adventure living in a motorhome.

How they chose the right camper for full time RV life 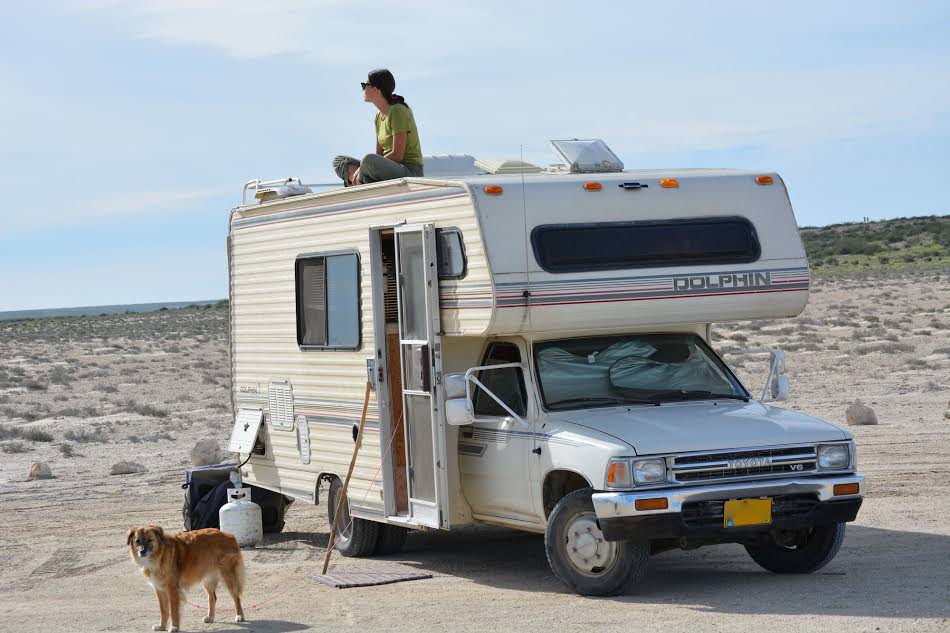 The couple knew they wanted a small RV to live in, something that could easily drive down Mexican dirt roads and narrow streets. They considered camper vans, and micro-trailers (like a Scamp or a Casita), but what they really wanted was a small, cheap RV.

Micro-RVs are about the size of a large camper van, like a Sprinter, but have an over-cabin bed which creates more living space in the back.

[You may also like: 11 awesome RV storage ideas for your tiny kitchen]

Brittany and Tom wanted a Toyota Dolphin, which they found in the Bay Area.

“We were super lucky it only had 30,000 miles; it had been kept in excellent condition,” Brittany said. “It sat most of its life but most of the upkeep was done on it. The interior was nice, the appliances worked, but it was a 1989 RV with pink shag carpeting throughout.”

The two fixed the Dophin up for RV life, tore out that carpeting, and hit the road for Baja, Mexico.

How living in an RV year round has affected their relationship 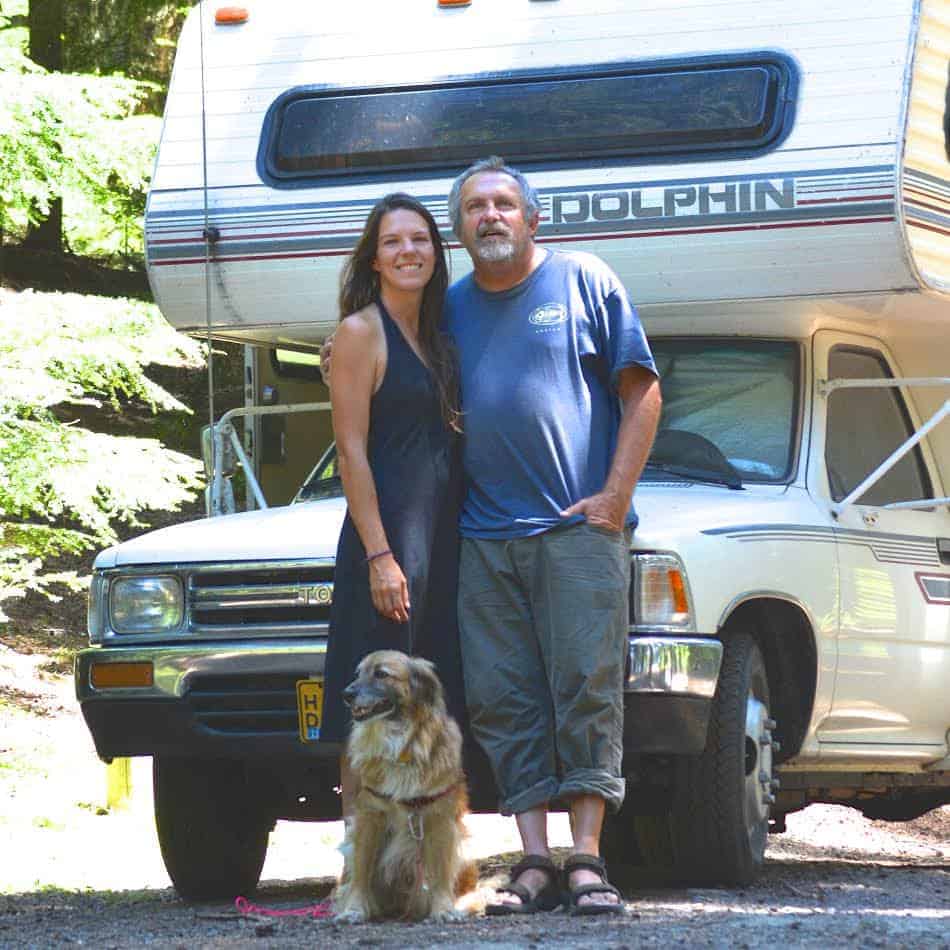 As soon as Brittany and Tom started their life of cheap RV living, they felt their relationship begin to change and settle back in the place where it began.

“Living in an RV year round felt like a return to our foundation; it allowed us to spend so much quality time together, doing something we’re both really passionate about,” Brittany said. “We’ve also gotten a system down for living in a small space, we have a dance to make the space work. It doesn’t even feel small anymore.”

She said their entire idea of home has shifted now that they’re doing the RV life.

“The other thing is that as far as being a couple sharing this tiny space in our RV we’re never more than 8 feet from each other. We travel together, hike together, sit outside together, we don’t get sick of each other. In fact, we’re a lot closer than we ever were before. Learning to navigate that small space is good for our relationship,” Brittany said.

What they love most about camper living 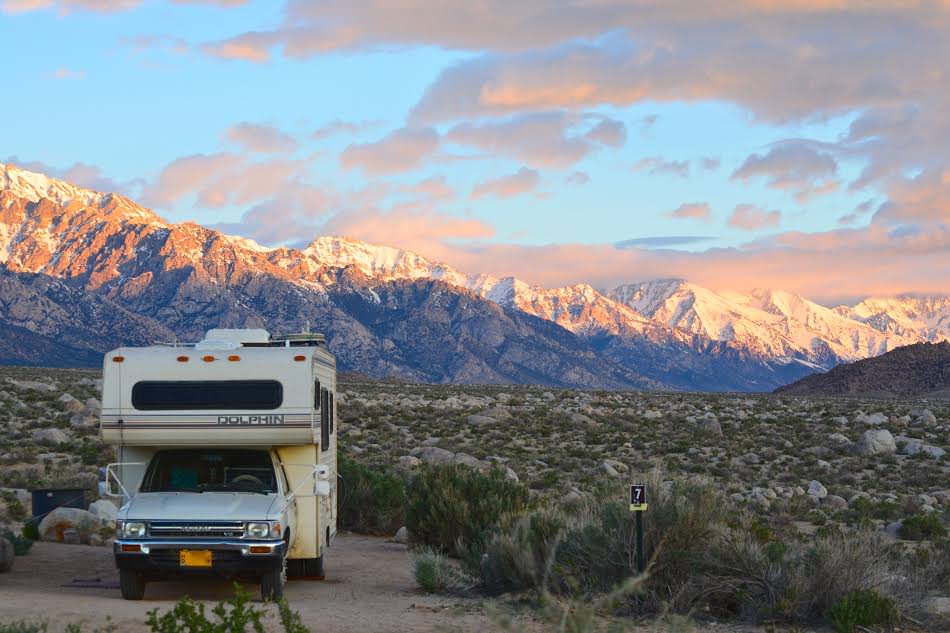 The freedom associated with camper living is huge for Brittany and Tom. If the weather is too hot, they drive to the coast to cool down. If they are tired of the beach, they head for the trees. Home is wherever they make it.

“It’s much more rewarding than I imagined before we jumped into RV life,” Brittany said. “Basically, if you can rough it a bit, the pros of living in a camper FAR outweigh the cons for us. We wake up in beautiful locations nearly every day, we save so much money by having a non-stationary home, and above all we get the freedom to adventure and explore year round!”

She said at first, cheap RV living was both exhilarating and a little scary, especially the vagueness of the future and job security. But now, Brittany loves it all.

“Nowadays, we feel amazing about RV life the vast majority of the time. So many days we wake up and almost immediately talk about how happy we are, how fulfilled we feel. Very often we look at each other and say ‘We live like kings’. Another one of our favorites is, ‘It’s never too late to have a happy childhood’,” she said.

Freedom of emotion is another thing Brittany loves about living in an RV year round.

“Living such an alternative lifestyle has made us realize how important is to let go of what others think and do what feels right for yourself! If we’re feeling sad/down/unhappy we have the freedom to just relax for a few days, to take some ‘us’ time, to go for a last minute backpacking trip, whatever it is that will help us cope. That was something that just wasn’t possible in the regular 9 to 5 life,” she said.

How they make money while living in a motorhome 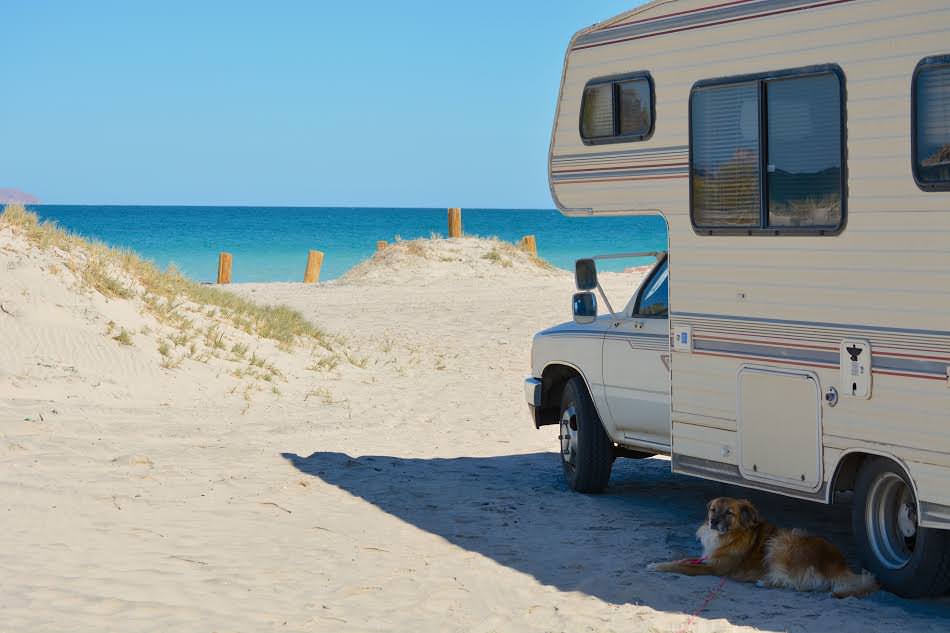 Brittany said like many other nomads, they have several income streams to keep them living in a motorhome comfortably.

When they first left for traveling, they sold everything they owned, and put the money directly into savings.

“Also, Tom is a retired firefighter so he gets a small pension that covers our basic expenses,” Brittany said. “I do occasional online freelance work to bring in extra cash, although my major focus is our travel blog, The Rolling Pack, which I’m hoping to start monetizing soon.”

The two of them pick up jobs when the opportunity arises, like teaching outdoor school in Oregon in spring.

Brittany and Tom expect to make it work to live in a motorhome as long as they want.

How they find places to camp while doing the RV life 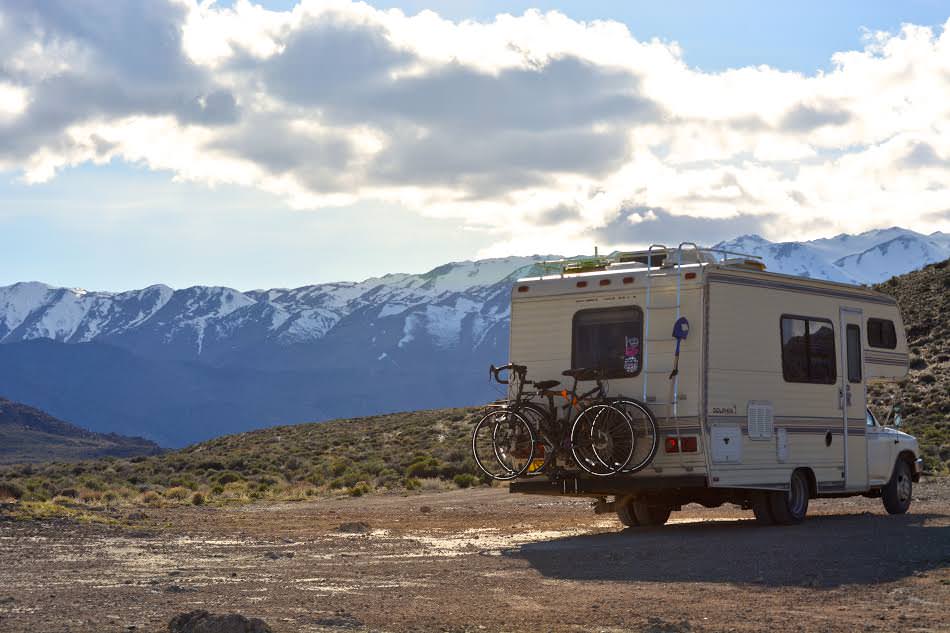 Brittany and Tom have become experts on finding free or cheap places to camp as part of cheap RV living. One of those ways is called boondocking, where you camp off-grid, usually on Bureau of Land Management or National Forest Service land.

“We probably spend 75% of our time boondocking in primitive camping areas, and 25% of our time in established campgrounds where we restock supplies. To find boondocking spots we use the BLM and National Forest Service websites, and for established campgrounds we often just use google. Camping apps are also a great resource; our two favorites are iOverlander and Allstays,” Brittany said.

RV Life as a culture 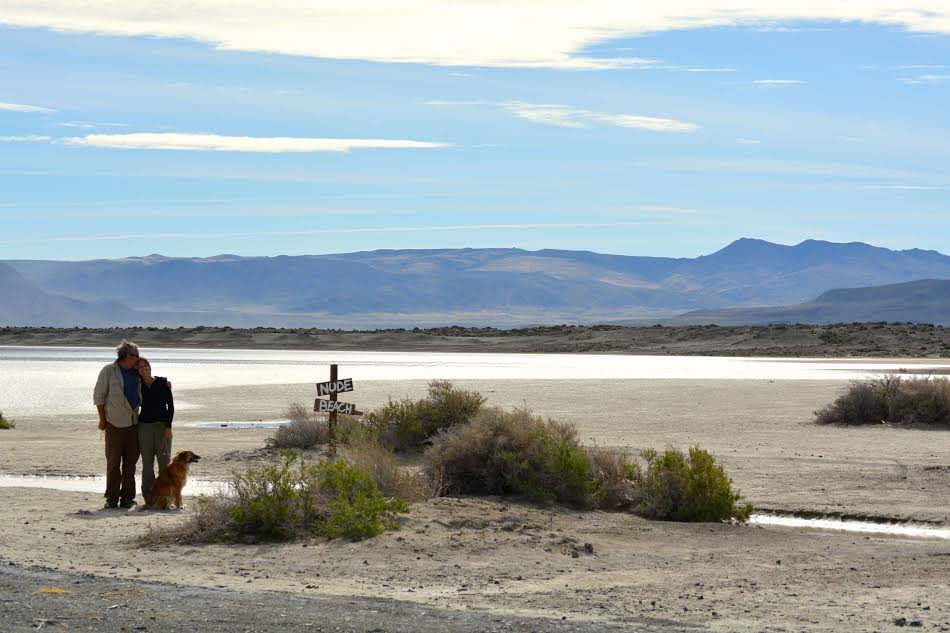 Maybe as recently as a couple of years ago, people would look at you in surprise if you announced you were moving out of your home for cheap RV living.

But now, the experience of RV life is becoming more and more common. It’s something Brittany has noticed herself.

“I feel like we meet more and more people who have a positive reaction to what you’re doing,” she said. “When we first started living in an RV year round, it felt like more people looked at us a little funny, but now when we meet people they’re curious how to get into it.”

She also thinks economics has something to do with it, especially for the younger generation.

“The younger generation doesn’t feel they can count on a job for life and make enough to own a larger house,” she said. “A lot of them are looking at tiny houses and alternative to the typical expensive house. The financial freedom of not having a house payment, not having to pay rent, is worth a lot when the economy is unsure and jobs are unsteady.”

Talking to Brittany made me think about the benefits of living in an RV like theirs. There seem to be so many ways to live smaller and have a smaller environmental footprint.

I think it’s amazing to learn about people living outside the box.

Could you ever live in an RV, or do you already? What do you love about it?

Sign up to download seven of my favorite recipes for a small space! From chicken piccata, to shepherd's pie, to beef picadillo, these are sure to make your mouth water.

Success! Now check your email to confirm your subscription.