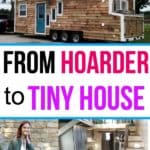 Jennifer Fuist looked around her apartment and sighed. There was stuff everywhere. Cramming the bookshelves, the end tables, every surface imaginable. She had at least 40 shot glasses, hundreds of magnets and books, and at least 500 crystals.

Jennifer knew she had an addictive personality, a hoarder, but didn’t know what to do about it. Every time she went shopping, she’d buy too much stuff. Found a tanktop she liked? She’d buy three of them. This went on and on, with groceries, shoes, clothes, trinkets, you name it.

“My apartment was so full,” she said. “I’d started putting stuff on the floor. If books couldn’t fit on the shelves they’d go under the desk in piles, under the bed in piles. When I couldn’t find space, I’d build another layer.”

Her stuff controlled her, made her feel angry, changed her moods and personality.

“I’d get angry when I couldn’t find a spot for new stuff I’d buy,” she said “It caused a lot of stress in my life.”

Enough was enough. Something had to give.

Why Jennifer decided to move into a tiny home

Jennifer’s overstuffed apartment cost $1,000 per month, a steep price to pay for someone on disability. She needed to figure out a way to save money, or rent would bleed her dry.

She knew buying a tiny house on wheels would save her money in the long run, so she started looking into options.

“I went to a tiny house Jamboree with 30 houses to walk through, and I started to get an idea of what it would be like going tiny,” said Jennifer. “I then met the builder of Incredible Tiny Homes and we sat there and developed a floor plan.”

And knew she finally had to deal with her stuff.

How Jennifer got rid of thousands of items

Even though it would be painful, Jennifer knew she had to get rid of all the stuff she’d collecting for over forty years.

She started off by creating a Facebook group called, “Pre-loved Trinkets and Treasures” and invited a bunch of people who she knew would dig her stuff. Amazingly, most of it sold.

“I made $10,000 on Facebook just by selling my stuff,” she said. “This wasn’t a garage sale group; I sold my stuff for close to what I paid for it. I’m really big into crystals. If I’d bought a crystal for $80, I sold it for $50. People who understand the value bought my stuff.”

It took Jennifer an entire year to get rid of most of her stuff. She did keep some for her new tiny house – a handful of collectibles, 100 books, and 100 crystals.

She was ready for her move.

Jennifer’s move into her new tiny house on wheels

Jennifer’s house is a tiny house on wheels. It sits on a trailer, and is 28 feet long by 8 feet wide, with storage units on the front and the back.  The next hurdle was figuring out where to park it.

Tiny homes are still not allowed in many parts of the United States. Counties often want houses that are at least 400-square feet, and many RV parks and campgrounds only let people stay for a set number of days.

Jennifer called around, trying to figure out where in Illinois she could park, and found a willing, family-run campground. It would cost her $400 per month.

“Getting used to living in a small space has been an adjustment,” Jennifer says. “I have a 10×8 loft when a full-sized bed and its comfortable. But I do spend a lot of time sitting in my bed Indian style and it cramps my back. I get cramped from tiny living, which is one of the biggest adjustments.”

She went with a composting toilet in her tiny house, a decision she definitely doesn’t regret.

“A lot of people don’t think it’s a good way to do it but I’d rather not deal with blackwater and sewer water and septic,” said Jennifer. “A composting toilet is pretty easy. I use a Separett and love it.”

Click here to read more about the best composting toilets for a tiny house.

Getting rid of clutter as a cultural shift

Going tiny forced Jennifer to confront her loads of stuff, and finally makes moves to downsize her life. She now has a greater sense of peace and well-being and doesn’t feel angry about where to put new stuff.

Jennifer’s not the only one who’s rethinking stuff.

Buying and owning stuff has long been an American ideal, but there’s a cultural shift sweeping through many homes. People are jumping on the minimalist bandwagon, hoping to reorganize their lives.

Plus, new research is emerging about the emotional harm caused by too much stuff.

He helped organize a study that found a link between clutter and procrastination, frustration and life dissatisfaction. No wonder people feel bogged down, unhappy and disorganized in a cluttered home.

I also had to downsize and get rid of stuff in order to move onto a sailboat, and the journey wasn’t always easy. But now that I barely own anything, I’m so much happier in life.

By the way, you can subscribe to Jennifer’s YouTube channel, all about living in a tiny house!

Do you also need help getting rid of stuff and downsizing to a tinier life?