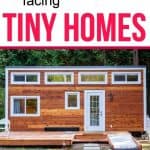 Tiny homes are growing in popularity as people decide to downsize and live frugally. The problem is that many states, cities and counties aren’t yet on board with the tiny house living trend.

That’s one reason why Alexis Stephens and Christian Parsons of Tiny House Expedition have been hauling their tiny home on wheels across the country. They want to raise awareness about tiny homes, talk to tiny home dwellers and the legal obstacles they face.

So far, they’ve dragged their tiny house on wheels 45,000 miles, interviewed countless people, and put together a series of documentaries on YouTube called, “Living Tiny Legally.“

Tiny homes still face challenges when it comes to legalization.

“There is still lack of understanding about tiny housing and why someone would want to live that way, even while the TV shows and YouTube videos are delighting millions of viewers,” she said. “The excitement over tiny houses and what we like to call the ‘adorability factor’ can be used as a foot in the door to deeper conversations with our neighbors and policymakers about affordable and environmentally friendly housing.”

In their film Living Tiny Legally: Part 2, tiny home designer Jay Shafer stated that the movement has gone from renegade to mainstream, that a critical mass of tiny house rule breakers, or rule benders, is influencing community development policy and the mainstream perception of the American Dream.

“The biggest obstacles to tiny housing include ‘not in my backyard attitudes’ and restrictive zoning and minimum square footage requirements. These are being overcome in a growing number of cities through collaboration between concerned citizens, community stakeholders and local governments. The precedent that does exist is incredibly valuable. It provides a how-to guide for other cities and states,” said Alexis.

The importance of education for tiny house living

A lot of policymakers, government officials and neighbors still have no idea what tiny homes even are.

Alexis said its important to really reach out and connect with people to share tiny house living.

“Seeing really is believing. Sharing profiles of tiny house dwellers, who they are, what they do, what they believe in and how they contribute to a greater community is probably one of the best advocacy tools out there. Also, there’s nothing like experiencing a tiny house in-person to appreciate the possibilities of small space design and better understand how this could be a quality home for many, if not yourself. We strongly feel that tiny house exhibits are effective advocacy tools for legal and social acceptance,” she said.

There are strides being taken to legalize tiny homes

Alexis thinks more and more cities are on the way to legalizing tiny homes, which are normally considered RVs, or can’t seem to pass all the various codes associated with home-building.

“Over the past three years, we’ve seen tremendous legalization progress for tiny housing,” she said. “The precedent that is being established in local zoning ordinances have been shared like wildfire all over the country, which is opening the door for more positive change. Perhaps the most significant progress is the debut of Appendix Q for International Residential Code. This creates a national model building code for tiny houses; it needs to be adopted on the local level—state and county or city. Though the Lake Dallas Tiny Home Village was able to use the appendix conditionally, just for their planned moveable tiny house development.”

[You may also like: How to build a tiny home and figure out where to park it ]

“There’s a positive ripple effect that’s happening,” she said. “Very few cities want to put their neck on the line, but once the precedent is set, it’s much easier to start the conversation in other cities. Believe it or not, Los Angeles is strongly considering legalizing tiny houses as accessory dwelling units. That would be historic for a major city like that.”

She said interesting things are happening in the small town of Spur, Texas, which has declared itself “tiny home friendly.” In that town, tiny home dwellers are allowed to buy a lot and put their tiny home there, as long as they take off the wheels and the axel. So far, the city has sold 30 lots, with ten tiny house residents now.

“It’s a dying town, and this is part of a revitalization effort to attract more residents,” Alexis said. “The city has the infrastructure for 3,000 people, but have just under 1,000 people currently living there. I’m really interested to watch them grow because it would be feasible for tiny house residents to be a majority there, which would be funny.”

Why Tiny House Expedition is important

Alexis and her partner Christian wanted to live tiny due to its simplicity, flexibility and adventure.

“No matter if you travel or stay put, tiny living encourages a stronger connection to your surroundings, which opens the door to more experiences. It all began with a road trip to Lake Michigan where Christian and I learned, we worked well together in small spaces and enjoyed traveling together,” she said.

[You may also like: How to live tiny without killing your partner]

She said after her divorce, she was in a transitional phase and wanted to embrace adventure, so the tiny house movement really resonated with her.

“It’s a way of life that ditches the traditional script of our largely dissatisfied consumerist society, for a life in a simple small space. Less things, more experiences and higher quality of life. Plus, tiny houses are super cute and offer the flexibility to be mobile — a comfy ticket to adventure,” she said.

She said the grassroots tiny homes projects across the country are amazing and inspiring. They address housing issues, the need for sustainable living and the yearning for a meaningful lifestyle.

“That’s when I had a major lightbulb moment. The idea was born to travel North America to document the community experience of the tiny house movement,” she said. “Our project has evolved over time. Early on we saw the need for more education around the legal obstacles to tiny housing and how both individual tiny dwellers and local officials can overcome these.”

What is Tiny House Expedition up to next?

Tiny House Expedition took a break from towing their tiny home around to hang out with family and friends in North Carolina.

Christian upgraded the tiny home on wheels and put in a standing desk space.

They now have a  travel vlog on YouTube channel which is a more intimate look at their nomadic tiny house life.

“We’ve learned so much about how-to travel safely and enjoyably with our tiny house that we have a launched a how-to video series and webinar. Also, we are working on our in-production episodic docu-series on the people, culture and community experience of the tiny house movement and planning for Living Tiny Legally, Part 3.”

Alexis has lived in a tiny home for years now and hopes eventually, there’s a nationwide shift in the conversation.

“The living tiny legally series is a passion project,” she said. “We sincerely believe that legal acceptance is necessary to give more people the opportunity to live tiny safely and without the fear of eviction. This is crucial for housing in America. More options are needed, so this is our public service. The funny thing is, there’s so much talk about affordable housing or attainable housing as I call it, but there’s very little action to make something happen. We want to empower people into action. There’s a real housing crisis across the country and it’s going to take some creative thinking to solve it.”

Check out some of Alexis and Christian’s videos here: